Four people accused of murdering a high-profile Paraguayan prosecutor while he was on his honeymoon have been sentenced to 23 years in prison.

The accused confessed to killing anti-mafia prosecutor Marcelo Pecci, 45, on a private beach resort in Colombia.

Colombian authorities believe it is likely that organised crime groups arranged the murder.

Mr Pecci and his wife were on the sixth and final day of their honeymoon when he was killed on Baru, an idyllic island off the Caribbean coast.

The judge presiding over the case in the northern city of Cartegna said the full sentence of 47 years each for the four people was cut in half as part of a plea deal, but ruled out other benefits such as serving any of the sentences at home.

A fifth person accused of involvement has pleaded innocent, while a sixth suspect remains at large, Colombian police said.

Authorities believe the Brazilian prison gang First Capital Command, a major exporter of cocaine, was involved in coordinating the murder, but said that they have been unable to identify the mastermind behind the attack.

Colombian Attorney General Francisco Barbosa told reporters during a press conference earlier this month that the men had been paid a sum of around $500,000 (£408,000) for their part in the hit.

Investigators added that the crime may be connected to international drug trafficking and "radical terrorism".

Just two hours before the attack, Mr Pecci's wife, journalist Claudia Aguilera, had posted a picture on her Instagram account announcing that they were expecting a baby.

She said that they were on a stretch of private beach of Decameron Hotel on Tuesday morning when her husband was targeted.

"Two men attacked Marcelo. They came in a small boat, or on a jet ski, the truth is I did not see well," she told El Tiempo newspaper last month.

She said that one of the men got off and "without a word he shot Marcelo twice, one [bullet] hit him in the face and another in the back". 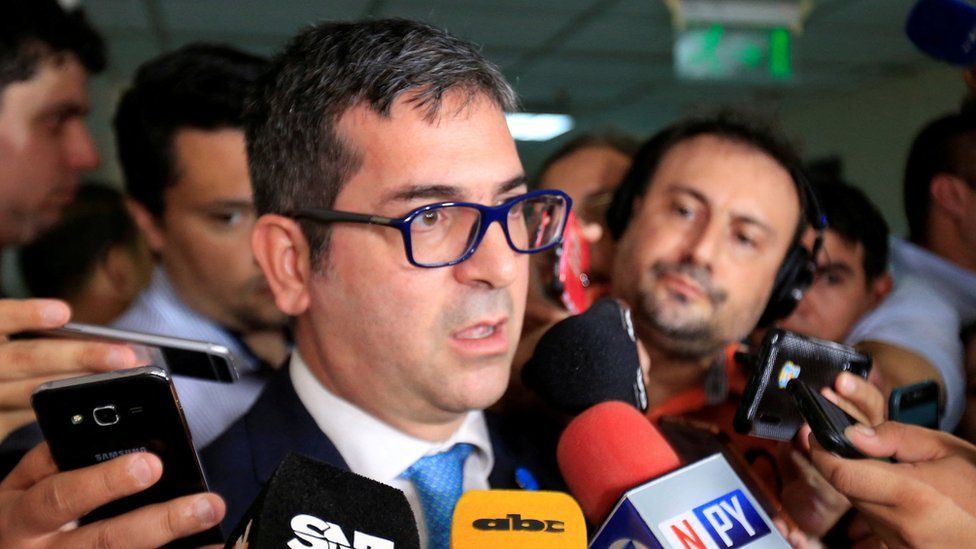 Mr Pecci was a high-profile criminal prosecutor in Paraguay

Ms Aguilera was not injured in the attack.

Mr Pecci was part of "A Ultranza Py", the biggest operation against cocaine trafficking and money laundering in Paraguay's history.

According to Paraguayan media, the operation broke up a ring which smuggled drugs from cocaine-producing hotspots Colombia and Bolivia through Paraguay to Europe.

He was part of the international team which earlier this year seized hundreds of millions of dollars in assets and arrested dozens of suspects.

The US Bureau of International Narcotics and Law Enforcement Affairs said that "Pecci's work fighting organised crime stands as an example to us all - especially his efforts to bring to justice those who engaged in money laundering, drug trafficking, and corruption".

While Mr Pecci had bodyguards in Paraguay, he did not have any protection while on his honeymoon in Colombia, and the Colombian police said it had not been aware of his presence in the country.

Last month, Paraguayan President Mario Abdo condemned what he called the "cowardly assassination of the prosecutor Marcelo Pecci in Colombia saddens all of the Paraguayan nation".

"We condemn in the most energetic terms this tragic occurrence and redouble our commitment in the fight against organised crime."