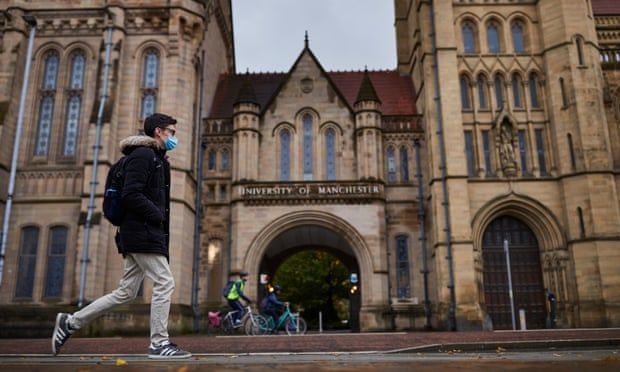 More than 3,000 students sign petition against keeping lecture halls vacant with no reduction in tuition fees

The University of Manchester is facing a mounting backlash from students after becoming the first to unveil plans to keep its lectures permanently online with no reduction in tuition fees.

More than 3,000 students have signed a petition condemning the redbrick university for its plan to offer only seminars in person – with lecture halls to be left vacant even after the pandemic. Prof April McMahon, vice-president for teaching, learning and students, also ruled out offering a tuition fee discount.

However, Manchester pledged to continue in-person teaching for lectures with an “interactive” element, such as question and answer sessions.

Other universities are said to be planning similar approaches after the pandemic, although Manchester, one of the largest universities in the UK, is understood to be the first to make a formal announcement.

Student Emily Bennett, who launched the petition against online learning, said: “Students are obviously unhappy with the decision as we don’t feel like we were adequately consulted on the matter, and particularly for humanities subjects, this change would result in drastically lower contact hours a week.”

She added: “Obviously it is essential that there is an option for online learning due to continued restrictions and access requirements, but the majority of students would be able to and would prefer to return to in-person teaching for the next academic year.”

The anger came in response to an interview with student newspaper the Tab, in which McMahon said the university planned to move towards a “blended learning” model in the long term and there would “absolutely not” be any fee discounts for students, since “it’s more expensive to produce a lot of the material, to make sure it’s inclusive, accessible and high quality”.

Prof Danielle George, head of blended learning, confirmed in a clip of the interview shared with the Guardian that this would mean large lectures would stay online, since they are “didactic and non-interactive”. However, she said “there isn’t that much across the university” which is not interactive.

Ayma Khan, a student researching the shift for the university, said in the clip: “So far the data we have and the students I’ve spoken to are so demotivated by online learning that they don’t want any element that’s online.”

The interviews follow an earlier statement published by the university which unveiled blended learning as the “default model of teaching” in future. The statement said in-person sessions on campus would be reserved for “labs, seminar discussions or in-depth Q&As” while explanatory material, thought to include lectures, would be available via video.

“People are very angry,” said Ben McGowan, the first-year politics and sociology student who conducted the interview for the Tab. “It doesn’t feel like it’s done for accessibility reasons, it feels profit-driven, a way to cut corners without cutting tuition fees.”

The move follows a fractious year for relations between the University of Manchester and its student body. Last autumn, students tore down fences erected outside halls of residence in a heated protest against the university’s botched pandemic response. This later resulted in large-scale rent strikes and a vote of no confidence in the vice-chancellor, Nancy Rothwell.

A Universities UK spokesperson said: “Universities continually review their learning and teaching strategies, and will be looking at how and when to incorporate more blended provision in a non-pandemic future.

“It is unclear at this stage whether blended learning will be a permanent fixture.”

Last week vice-chancellors from several universities in Wales told MPs that “some things work better online, especially some large lectures”, and that they expected this to continue post-pandemic.

A University of Manchester spokesperson said: “This is not online teaching, but about augmenting in-person lectures, seminars, labs, Q&As and discussions, and workshops with high quality online materials for self-study. We have been speaking to students for some time about ways to increase flexibility and choice and we will continue to do so to help shape this activity to their needs and the needs of each discipline.

“Once the pandemic is over and social distancing is no longer required, if large lectures – or any other size lecture – are interactive then they will go ahead in person.”
Add Comment