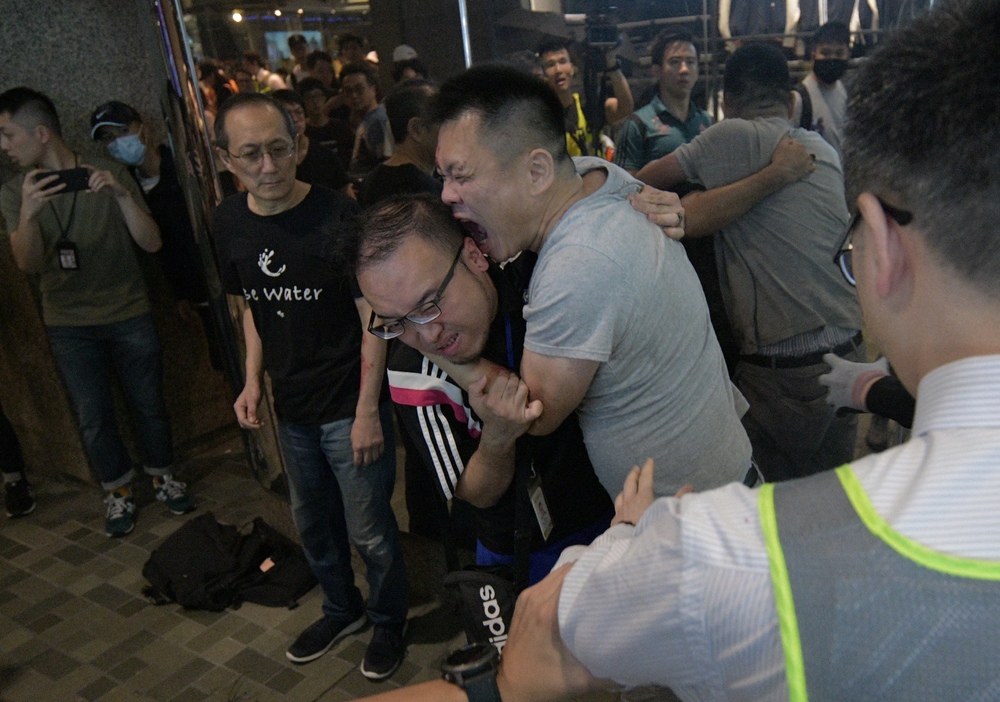 A jobless man yelled “Liberate Taiwan” before allegedly attacking a couple with a knife and biting off the left ear of former Democratic Party district councillor Andrew Chiu Ka-yin in Tai Koo Shing during the 2019 social unrest, the High Court heard on Monday.

Joe Chen, 49, pleaded not guilty to three counts of wounding with intent and one of common assault when he appeared before High Court judge Judianna Barnes Wai-ling and a jury consisting of three men and four women.

Testifying in court on Monday, Louise Wan Ho-lun, had his belly slashed outside the Cityplaza mall, near Taikoo Shing. Protesters had gathered on November 3, 2019 when he was about to leave the mall with his wife Leung Pik-kei, as well as the wife's cousin Leung Ying-ying and the cousin’s son, at 6pm to have dinner.

When he stepped out of the mall, a man dressed in grey, wearing a backpack in front of him and both hands hidden in it, was standing three meters to Wan’s right.

The man suddenly yelled “Liberate Taiwan” in half Cantonese and half Putonghua, to which Wan replied: “What the xxxx are you talking about?”

The man then slurred one to two sentences. That was when Wan realised something was not right and told his family to stay back.

The man started to walk towards Wan, with his hands still hidden in his backpack and speaking inaudibly.

“I suddenly felt something wet and cool for some unknown reason,” Wan said. “After I lifted my shirt to have a look, I saw a lot of blood coming from my stomach, and I walked towards the side and told my wife that I was attacked."

Wan applied pressure to his wound to stop the bleeding and saw the man walking towards his wife. He ran towards the attacker and dragged him on the floor.

“When I was falling to the ground with him, I saw something that looked like a knife, fall on the ground, but I was not extremely sure if it was a knife. It was about eight inches, with a brown handle,” Wan said.

“I then felt very tired, and my back was completely wet. I tried to crawl towards my wife, but I completely blacked out,” he added.

In the prosecution's opening address, the court was told that Chen went towards Leung after Wan blacked out, and said: “It does not matter even if I am dead,” before stabbing Leung in the back.

Chiu, who was the district councillor of the district at that time, was stopping a confrontation between security guards and citizens inside the mall. He then heard a call for help at 7.25pm, and headed towards the scene.

Chiu saw Wan and Leung injured, and also spotted a knife on the floor. Chiu then asked Chen: “Why are you assaulting others?” and Chen responded in Cantonese: “I am not assaulting men, but dogs."

Chiu asked security guards to push Chen towards a wall, but Chen escaped from the security guards and tried to run towards other citizens. Chen then bit Chiu’s left ear off when Chiu was trying to stop him, and tried to bite Chiu’s other ear. He was then arrested by police officers for seriously wounding others.

Chiu was hospitalized for 19 days after the incident, but the operation to attach his ear was unsuccessful.

Wan was stabbed in his belly, below his neck, back and left shoulder, and was already unconscious while being rushed to the hospital and was in critical condition. He stayed in the intensive care unit for three days, and was discharged six days later.

His wife was also hospitalized for three days after being stabbed in the back.