Tourism sector lawmaker Perry Yiu says many operators optimistic about post-Lunar New Year boost, but full recovery might not be on cards until next year.

Mainland Chinese residents made up only 14 per cent of all arrivals, or 64,000 visitors, into Hong Kong since the city’s land border reopened nine days ago, marking a sluggish return to quarantine-free travel that tourism operators say indicates recovery is some way off.

Hong Kong residents have taken up the bulk of cross-border traffic arriving in the city since the resumption of quarantine-free travel with the mainland on January 8.

Figures from the Immigration Department show mainland residents made up only 64,000 of the 460,000 inbound travellers at all air, land and sea checkpoints between January 8 and 16.

Hong Kong residents, meanwhile, accounted for 73 per cent of the inbound travellers.

Among ­mainland visitors, the 31,617 who entered via the land border, including four major checkpoints and the high-speed rail that resumed services on Sunday, accounted for only 6.6 per cent of all combined quotas for these entry points in the first nine days of the reopening.

Authorities on Tuesday announced they would increase the number of daily northbound and southbound high-speed rail tickets from 14,000 to 20,000 from Wednesday.

The quota of 50,000 travellers per day at the four land border checkpoints, including the two that opened on January 8, will also be raised to 65,000 for four days starting from Wednesday.

Tourism sector lawmaker Perry Yiu Pak-leung told the Post that the small proportion of mainland residents in the city’s visitor count was no surprise as the sector had anticipated a gradual rise in the number of tourists while pandemic-related restrictions eased in the city and on the mainland.

“I believe there won’t be a mad dash [of mainland tourists] to Hong Kong. I hope that other land ports can be opened in the next phase, with the PCR [polymerase chain reaction] testing requirement further loosened for the number of tourists to rise,” Yiu said.

The city recorded nearly six times more tourists last year than in 2021, with around 600,000 visitors tallied at the end of 2022. Among all tourists, more than 370,000 were from the mainland, which represented a nearly fivefold growth from 2021, according to the Immigration Department.

While the overall tourist count had surged, Yiu said the number from across the border was still incomparable to pre-pandemic times, for example, when the city logged 43.33 million mainland visitors in 2019 alone, with the proximity of the reopening to Lunar New Year diverting some away from Hong Kong.

“It’s very close to Lunar New Year now. Since people didn’t get to go back to their hometown last year due to the pandemic, they might prioritise family reunion first,” he said. 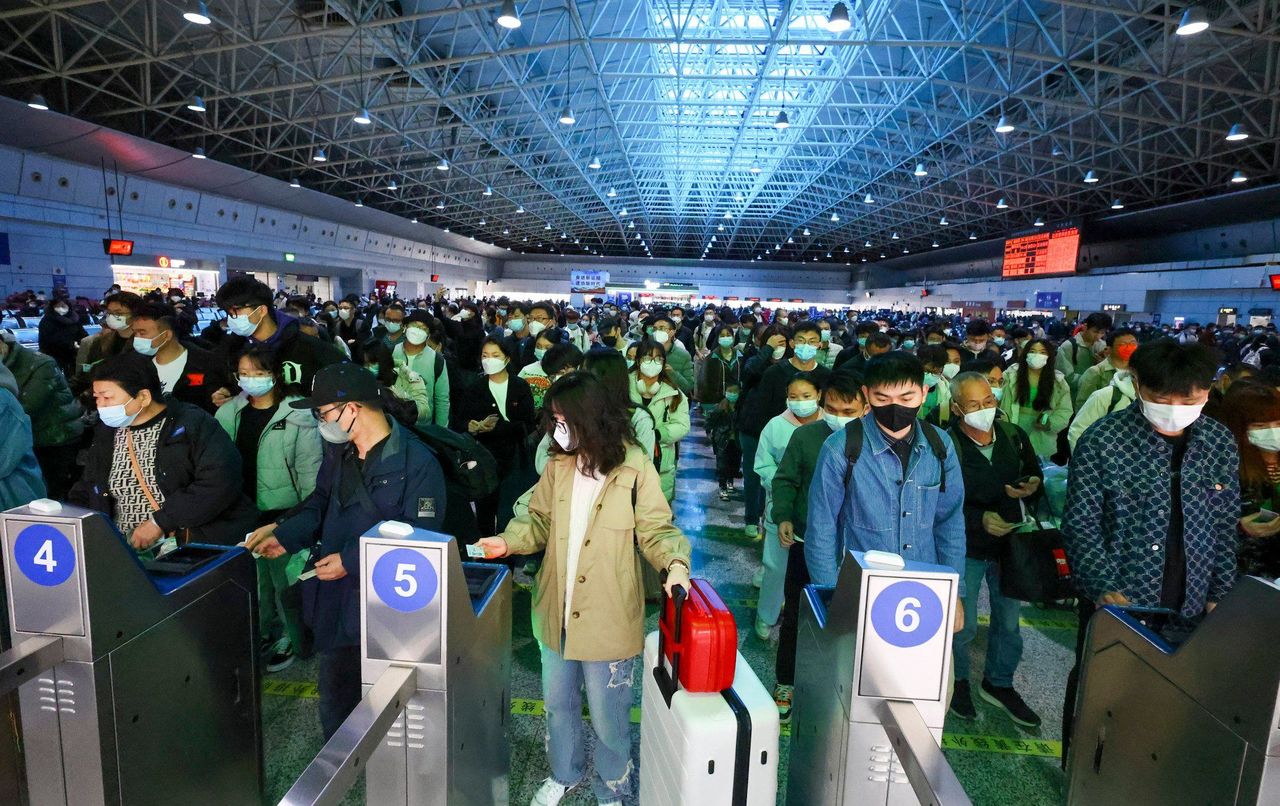 Passengers in Guangzhou await boarding for high-speed trains to Hong Kong after the service resumed on Sunday.
The lawmaker added that he expected an uptick of mainland tourists in mid-February as Lunar New Year celebrations ended, but cautioned that a full recovery might not happen until next year.

Some mainland tourists in town told the Post that they had come for a day trip, while a mainlander who lived in the city said her friends were not tempted to visit Hong Kong due to the PCR test requirement.

“I’ve heard a few friends say it’s inconvenient to come to Hong Kong still, because of the testing requirement. [I think] it’s not that complicated, but they found it a hassle,” said Heidi Xie, who is in her 30s.

Currently, those wishing to enter Hong Kong from the mainland need to present a negative PCR test result, conducted within the last 48 hours, at the border to be granted entry.

This requirement has drawn criticism from lawmakers, who argued that completing a PCR test on the mainland was too inconvenient for travellers to make it across the border in time before the holidays began.

Unionist lawmaker Bill Tang Ka-piu said some Hong Kong residents had sought help from his group as they could not book PCR tests on the mainland and failed to fulfil the requirement for returning to the city. One had said many centres there had ceased operating.

Tang added that these residents were still able to return to Hong Kong at the moment but he feared more centres would be closed due to the Lunar New Year holiday and people would not be able to return to the city for celebrations and work.

He called for replacing the PCR screening requirement with rapid antigen tests.

“Amendments should be made before the holiday starts. Or else, it will be chaotic as residents cannot return to the city for the Lunar New Year celebration,” Tang said.