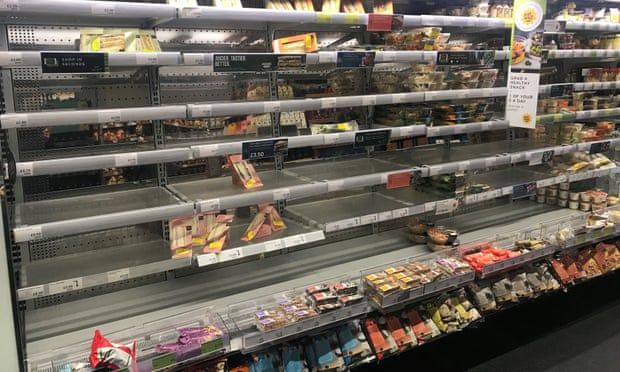 Shops in Northern Ireland will have gaps on the shelves when the grace period in the Brexit protocol ends, the chair of Marks & Spencer has warned.

Ahead of a government statement on the issue, Archie Norman said the retailer was already planning not to supply some Christmas products to Northern Ireland because of the risk that fresh food will be impeded under forthcoming arrangements.

He said: “This Christmas, I can tell you already, we’re having to make decisions to delist product for Northern Ireland because it’s simply not worth the risk of trying to get it through.

“We’ve already made that decision. We’re waiting to see how serious it’s going to be but if it’s anything like southern Ireland [the Republic of Ireland], and at the moment it’s set to be, then it’s going to be very, very serious for customers.”

He told the BBC: “It risks being incendiary for the public in Northern Ireland because you can’t think of a more visible demonstration of how you’re no longer a full part of the United Kingdom than [when] you can’t get your favourite Christmas products, you can’t buy M&S chicken, free-range eggs, sandwiches.”

In a letter to the Brexit minister David Frost, Norman said the current EU customs arrangements were “totally unsuited and were never designed for a modern fresh food supply chain between closely intertwined trading partners”.

He said M&S now completed 40,000 pages of customs documents a week to get goods into Ireland, and that would increase to 120,000 when the full rules for Northern Ireland started.

Lord Frost, the architect of the Brexit protocol, and Brandon Lewis, the Northern Ireland secretary, are due to make a statement warning they may in future unilaterally override the protocol requiring onerous checks if a simplified agreement cannot be struck.

The protocol, agreed by Johnson in 2019, effectively keeps Northern Ireland in the EU single market for goods and has forced M&S to employ vets to tick boxes and fill out forms.

On Tuesday night, the prime minister called on the EU to “address the serious issues that have arisen” with Brexit in Northern Ireland, as he prepared to publish a blueprint aimed at re-engineering the protocol.

So far EU leaders have urged Johnson to abide by the protocol or sign up to compromises that would mean a degree of alignment with the EU rulebook for the whole UK.

According to reports, the blueprint will include a proposal for an “honesty box” approach whereby it is accepted on trust that goods from big supermarkets or other trusted suppliers destined for Northern Ireland are accepted as remaining in the region.

This is unlikely to be accepted by the EU given its recent protestations that the UK has eroded trust by taking unilateral decisions on the protocol.

A Downing Street spokesperson said Johnson told the Irish taoiseach, Micheál Martin, on Tuesday that the protocol was “causing significant disruption” and pragmatism was needed to solve the post-Brexit issue.

The spokesperson said of Johnson’s phone call with Martin: “He made clear the UK government’s commitment to protecting the Belfast [Good Friday] agreement in all its dimensions.

“He said the EU must show pragmatism and solutions needed to be found to address the serious challenges that have arisen with the protocol.”

A spokesperson for the taoiseach told Johnson the UK’s statements on the protocol would be carefully considered but stressed the importance of the EU-UK framework for issues related to it.
Add Comment