More than 5,000 Argentina fans living in Qatar will welcome visiting the team to cheer La Albiceleste to glory.

When Argentina takes to the field on November 22 against Saudi Arabia in their opening match of the World Cup, expect more than just the travelling Argentinian fans to shout their support.

There is another group of devoted fans here who have supported La Albiceleste since 1986, before Lionel Messi was born.

The group, Argentina Fans Qatar (AFQ), was formed in June this year, just before Argentina’s match against Italy. Some of the fans will be inside the stadium in November and December while others will cheer from the fan zones.

But AFQ is the story of die-hard Argentina fans of various nationalities, primarily Indian, Nepalese, Sri Lankans, Bangladeshi, and also includes Africans and Qataris, who say their love for Argentina and Messi knows no bounds.

With Messi announcing that the Qatar World Cup will be his last, there is growing interest among fans to watch him one final time and their biggest hope is that the two-time world champions win their third title on December 18. 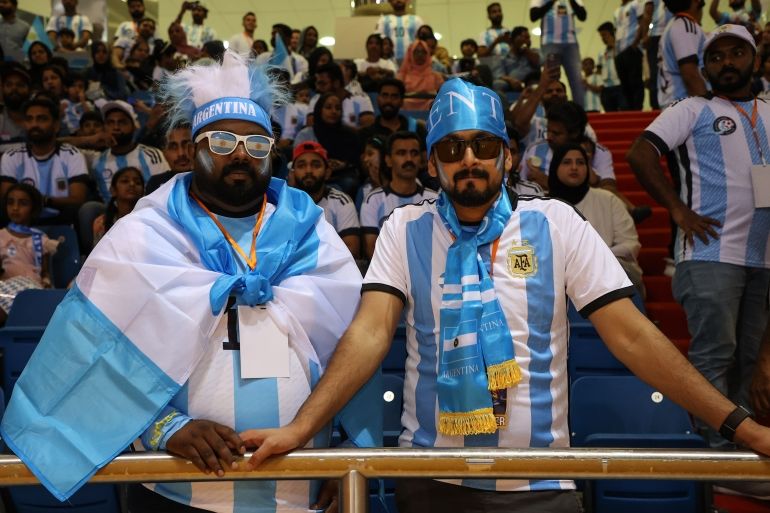 The Argentina Fans Qatar group has attracted thousands of supporters from all over the world, but mostly from Kerala in India
“Our driving force is the love for Argentina, and our goal is to support and make travelling fans feel at home in Qatar,” Mohammed Suhail Ali, an Indian engineer and a founding member of the 5,000-strong group, told Al Jazeera at a carnival of Argentina fans in Qatar.

“Within a span of five months we have been able to grow the fan base to more than 5,000 and only one thing unites us is the love for Argentina,” he added.

The majority of AFQ members are from Kerala, India’s football capital in the country’s south, where Argentina and Brazil fans dominate.

According to Muhammed Shaneed, a real estate marketer from Kerala who has been a member of the group since its inception, fondness for Argentina and Brazil in India dates back even before Messi’s birth. 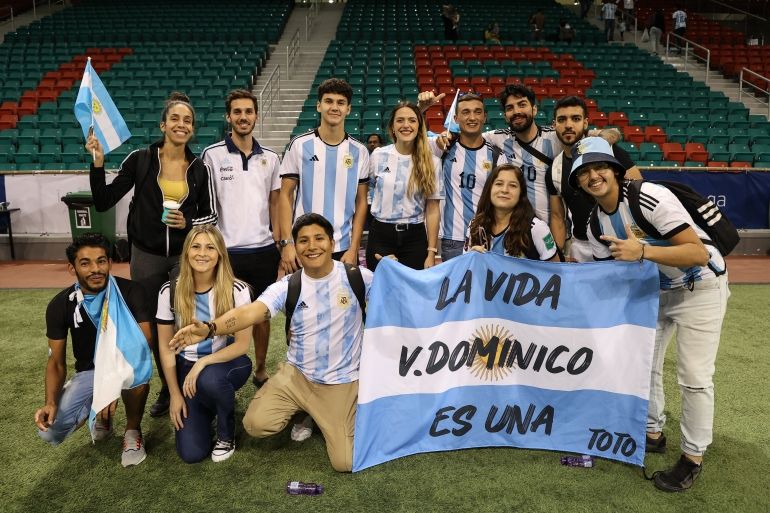 The first World Cup that fans in Kerala got to see was Mexico 1986, when the Brazilian team, led by Socrates and featuring legends such as Zico and Falco, displayed wonders with the ball, enthralling everyone who watched.

During that same World Cup, fans witnessed the birth of a new star as Diego Maradona rose to prominence and won the hearts of football fans around the world.

“I was converted by Maradona’s magic in 1986 to lead his country to win the title, and everything we do here is a reflection of our undying love for Argentina,” said Rafeek Hammed, an Indian shopkeeper, another AFQ representative. “We want Argentina and Messi to succeed and we will be at the stadiums to cheer them.”

Faiz Khan, a Nepalese shop attendant, said: ” I began supporting Argentina in elementary school, where I saw people paint their vehicles, roads, trees, and even houses in white and blue. I’m emotionally invested in them, and I want them to win the trophy. I have tickets to all three group matches and possibly a quarter-final to watch them.” 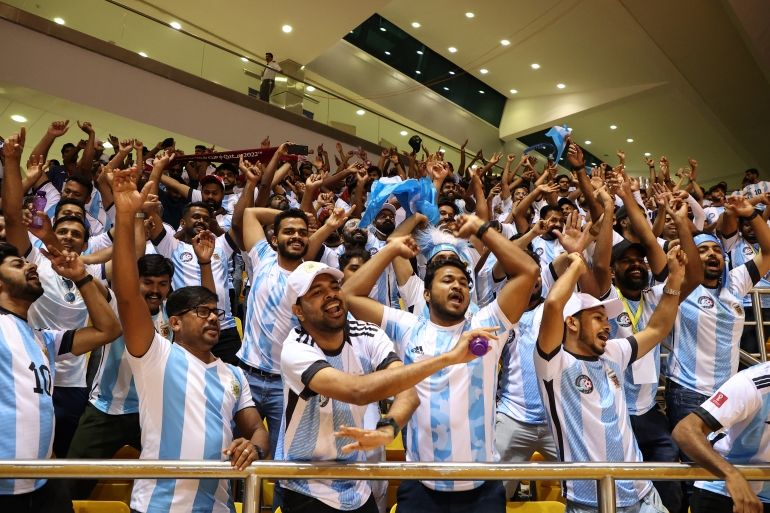 The estimated 5,000 Argentina fans living in Qatar will be joined by 60,000 travelling from Argentina itself

Roger David, a Cameroonian teacher, said: “Argentina has my support because of Lionel Messi, who is the best in the world and deserves it. He has accomplished everything in club football, so now is his chance to shine and win the grand prize.”

“Fans are emotional, and they look for happiness in football through Messi,” said Ismail Ali, a Pakistani fan. “He has brought many joy and memorable moments to the world, so this is his World Cup to win for the entire world.”

Jessica Costa, a Qatar University student from Argentina, described her pride at the fans’ carnival.

“It’s amazing to see people from other countries wearing your country’s jersey,” she said. “I am proud to see them celebrate Argentina with such joy, cheering for our team.” 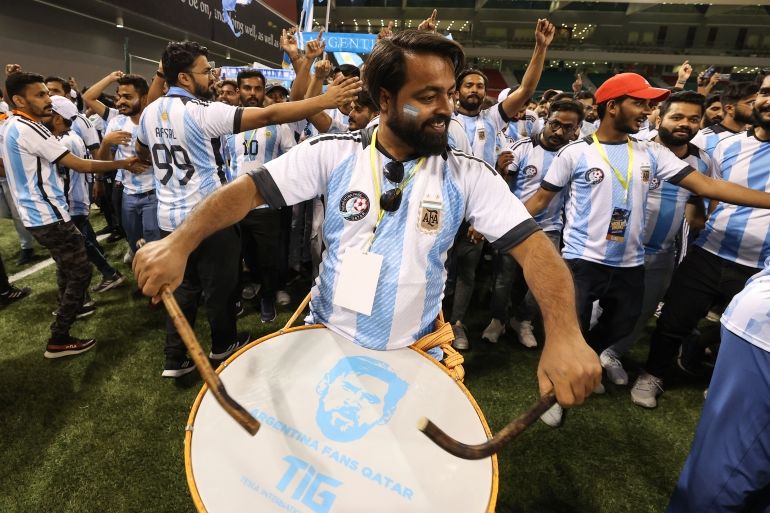 The group has grown to 5,000 members since June

According to Lucas Aurieme, an Argentinian resident of Qatar, it was “strange but cool” to see other nationals celebrating and rooting for his country.

Argentina “moves that sentiment of people all over the world”, he said, adding that he felt “elated” while riding the metro to the event and seeing many fans dressed in Argentina’s colours.

“Many people have asked us for selfies just because we’re from Argentina. We’re not even famous,” he added.

Agustina Ramos said it was every Argentine’s dream to see Messi and his teammates win the World Cup in 2022. 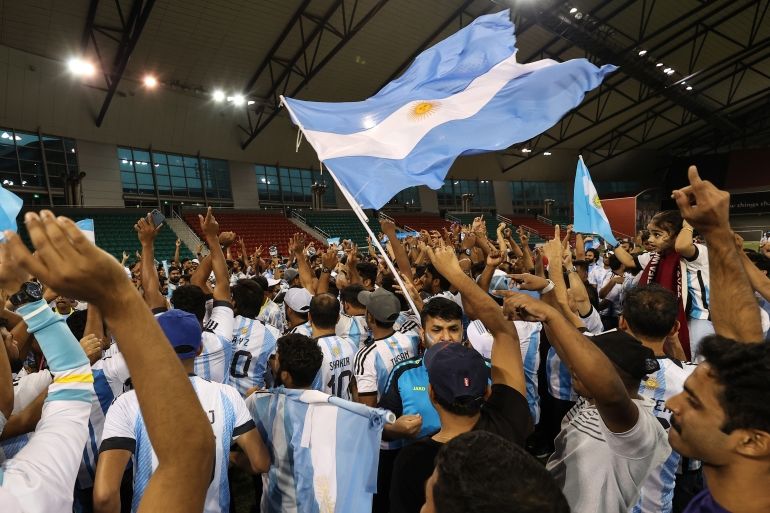 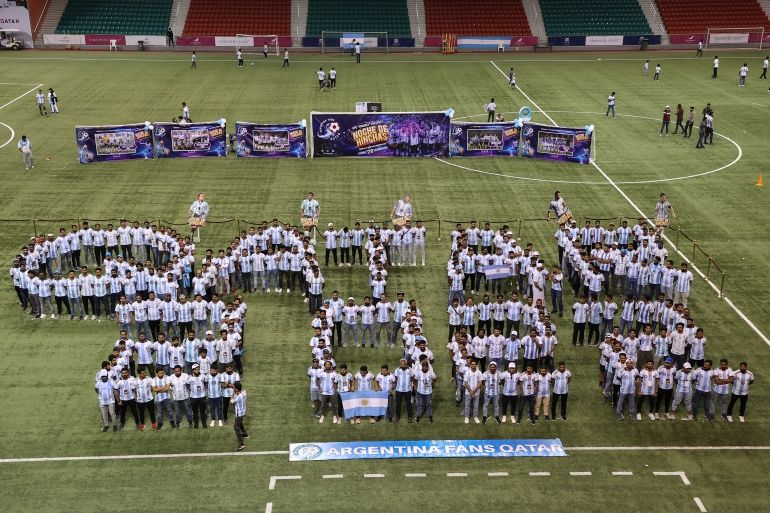 Argentina fans club in Qatar at the event