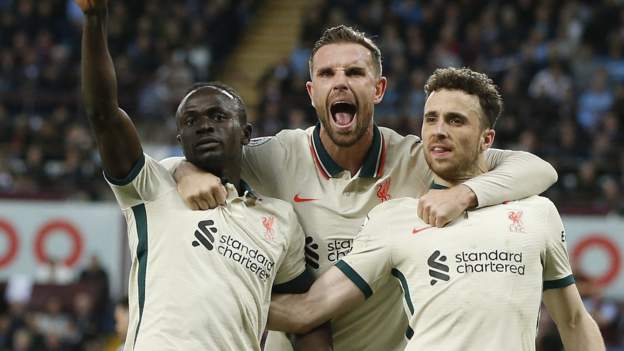 Liverpool maintained the pressure on Premier League leaders Manchester City as they survived an early scare to come from behind and win at Aston Villa. 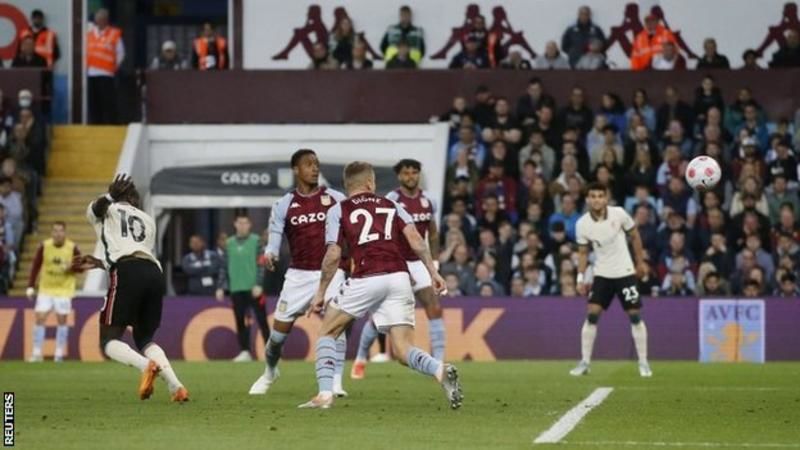 Jurgen Klopp's side suffered a shock after only three minutes when Douglas Luiz bundled home after Liverpool keeper Alisson failed to hold his header.

Liverpool were on terms within three minutes when Joel Matip scored following a goalmouth scramble and the sides then exchanged chances before Sadio Mane put the visitors ahead with a superb angled header from Luis Diaz's cross in the 65th minute.

The win means Liverpool now lie second only on goal difference before City's visit to Wolves on Wednesday.

Former Liverpool striker Danny Ings wasted opportunities to equalise and inflict a blow to his old club's hopes of winning a historic quadruple - although the Reds did suffer an injury setback when influential midfielder Fabinho went off in the first half with a hamstring problem that must make him doubtful for Saturday's FA Cup final against Chelsea.

Liverpool manager Jurgen Klopp made five changes from the side that drew with Spurs at Anfield on Saturday, resting tired legs and freshening things up with Saturday's Wembley showpiece in mind.

It was a ploy that worked in the end, although Liverpool were set back on their heels when they were punished for a slow start as Villa went ahead.

Liverpool showed their character and the threat they carry to reply instantly and, while this was not a particularly assured performance, the only thing that matters at this stage is the final result, and this was a case of job done.

The injury to Fabinho will be a serious worry to Klopp with FA Cup and Champions League finals on the horizon but he will hope the Brazilian's swift removal in the first half will limit the damage.

Once again January signing Diaz was a key figure, a danger all night and the provider of the cross that brought Mane's decisive header. The Colombian's signing has proved to be a masterstroke.

Now the scenery switches to Molineux on Wednesday, where leaders City face Wolves, who still have European aspirations of their own.

Pep Guardiola's side still have that advantage on goal difference but Liverpool's win at least ensures they stay right on Manchester City's shoulders as the season reaches its climax.

Gerrard with work to do

Aston Villa will finish the season in a comfortable mid-table position but so much of this term has been about manager Steven Gerrard discovering what he has at his disposal then laying the groundwork for next season.

He has talent in the shape of Emiliano Buendia but big decisions remain about whether he will strengthen in defence - where captain Tyrone Mings still looks suspect - and on the possibility of a permanent deal for his former Liverpool colleague Philippe Coutinho.

The Brazilian, on loan from Barcelona, only showed his ability in flashes here and it was clear the Villa fans felt more of a surge of hope when he was replaced by Buendia.

Gerrard certainly has something to work with but a lot needs to be done and he is a driven personality who will not want to cruise along in mid-table.

Villa, and Ings in particular, had plenty of opportunities to take advantage of some uncharacteristic uncertainty in the visitors' defence, with keeper Alisson fortunate to get away with one or two moments of poor judgement - although he then made a crucial save from the striker when he broke clear with a chance to equalise.

The end of the season will be the end of Gerrard's fact-finding mission and the serious reconstruction will begin at Villa Park.