The Conservative mayor for the West Midlands has lashed out at the process for allocating levelling up funds, calling for an end to Whitehall's "broken begging bowl culture".

In an angry statement, Andy Street said he wanted ministers to justify why "the majority" of bids in his region had been rejected.

The West Midlands received £155m from a £2.1bn pot of levelling up funds.

The PM has argued the most deprived areas would benefit from the money.

Speaking from Morecambe in Lancashire - which will get £50m to build an eco-tourism attraction - Rishi Sunak said his government was "completely committed to levelling up across the United Kingdom".

He said the process was transparent and that areas which had been unsuccessful this time would have another chance to apply for funding in a third round.

The idea of "levelling up" - or reducing regional inequality - was a key part of Boris Johnson's 2019 election campaign. Its aim was to close the gap between rich and poor parts of the country by improving services such as education, broadband and transport.

As part of the Levelling Up Fund, launched in 2020, local authorities can apply for money from central government to pay for regeneration and transport projects. The first round of funding was awarded in October 2021.

A total of 111 areas across the UK have been awarded money from the second round including £50m for a new train line between Cardiff Bay and Cardiff Central Station and £27m for a ferry in Shetland.

The north-west region was the biggest winner, securing £354m and Conservative Lancashire MP Sara Britcliffe said she was "over the moon" her local area would receive money to refurbish Accrington Market Hall.

However, others have complained about the process for allocating the money. 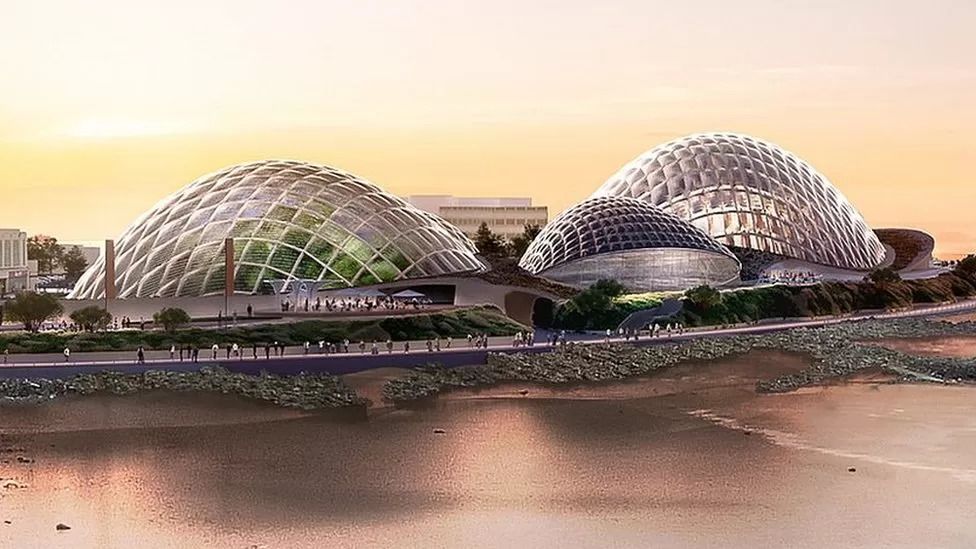 The Eden Project in Morecambe will be a sister site to an existing attraction in Cornwall
Venting his frustration on Twitter, Mr Street said: "Fundamentally, this episode is just another example as to why Whitehall's bidding and begging-bowl culture is broken, and the sooner we can decentralise and move to proper fiscal devolution the better.

"The centralised system of London civil servants making local decisions is flawed, and I cannot understand why the levelling up funding money was not devolved for local decision-makers to decide on what's best for their areas.

"The sooner we can decentralise and move to proper fiscal devolution the better."

His concerns were echoed by Philip Rycroft, former top civil servant at the now-defunct Brexit Department, who described the process as "completely crackers".

"£2bn of public money is being distributed across the nation by a bunch of civil servants who have probably not been to the vast majority of the places they are distributing money to - how can this be sensible," he asked at a think tank Reform event.

Head of the Local Government Information Unit think tank Jonathan Carr-West called the system "crazy" and expressed concern that councils were putting "huge" resources into applying for the funds, diverting money from "other useful and necessary things".

Labour's shadow levelling up secretary Lisa Nandy said her party would end the "competitive-style bidding" process but would not cancel projects that had already been given the green light.

Defending the mechanism, Business Secretary Grant Shapps said: "The truth is you've got to run a country somehow, you've got to have some kind of system in place.

"Not everything can be decided in the local town hall or by the local mayor," he told the BBC's Newscast podcast.

He said he agreed with the concept that "the closer you govern to people the better" but "in the end we are one nation, you've got to put the money somewhere, decisions have to be made somehow".

He went on to praise Mr Street who he said had brought "huge resources" to his local area.

Other projects set to get funding include:

*  £40m for a carbon-neutral education campus in Blackpool town centre

*  £20m to go towards the regeneration of Gateshead Quays, including a new arena, exhibition centre and hotels