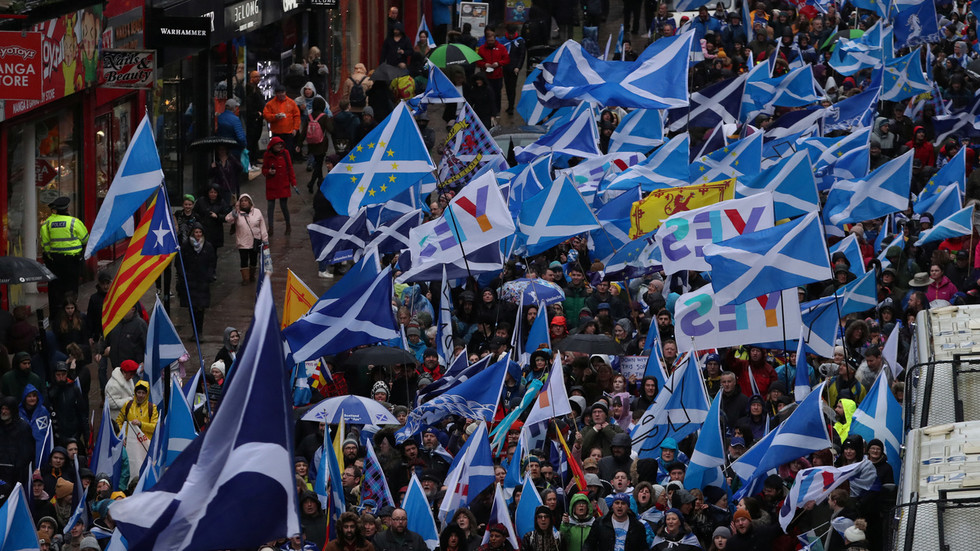 Less than a week after BoJo’s Brexit deal, is the UK starting to break up already?

As the Republic of Ireland provides EU benefits for Northern Irish residents, and Scots express fury at elements of the Brexit agreement, it’s clear that stopping the UK breaking up is now a major headache for Boris Johnson.

The ink is barely dry on the Brexit deal and reality has bitten.

Long tailbacks of lorries have been waiting to cross The Channel, due to increased checks.

British qualifications will no longer be automatically recognised across the European Union. And British police forces have lost access to the Schengen Information System database, which they use on average 1.65 million times a day.

But there’s a bigger issue that might not be so immediately obvious as these stark realities.

The first clear indications that Brexit could spell the beginning of the end for the United Kingdom have appeared.

The Republic of Ireland has announced it will fund the European flagship student exchange programme Erasmus for Northern Irish students.

Their counterparts on the British mainland are no longer eligible for the scheme. The Irish Minister for Higher Education Simon Harris said of the arrangement, “It’s not a cost, it’s an investment.”

On the face of it, it’s a noble act for a sovereign nation to fund a better education system for citizens of another state. But it’s not the only act of Irish generosity. Dublin is also doing the same to allow Northern Ireland’s population to remain in the European Health Insurance Card scheme.

Both of these moves saw United Ireland trend on Twitter.

It’s not hard to envisage people in Northern Ireland being disillusioned with being passed around like a political football by Boris Johnson and Westminster. Their geographic separation from Great Britain has made them the Achilles heel of many Brexit plans.

But there will be very few in Northern Ireland who won’t be grateful to their southern neighbours, as they are now set to retain some benefits of European Union membership without any cost to themselves.

Although a low-key move by the Irish, it’s savvy, benevolent and shows good faith — and will only boost the Irish assimilation movement. The message is, we’re extending our hand and want to help you.

It’s a far cry from Boris Johnson’s red tape that saw supermarket chains cause panic in November by revealing they may have to slash supplies of fish, dairy products and meat to Northern Irish stores. That looks like it won’t happen now due to the deal, but the feeling of being left to twist in the wind lingers in Belfast.

The Scots, too, are also looking to exploit the post-Brexit reality. BoJo’s agreement with the EU will pass in the UK parliament because the Conservative government and the opposition, Labour, will vote for it. But the third biggest party won’t. All of the Scottish National Party’s MPs will play the only card they can.

The EU referendum was 52/48 percent in favour of leaving, but Scotland voted 62/38 against. That’s a huge swing and the SNP’s refusal to back the deal, even though it will have no actual bearing on the outcome, is a signal to the Scottish population. It’s underlining the commonly recited mantra that Westminster doesn’t care about them, and only the SNP will fight their corner.

These tactics appear to be proving successful, as recent polls show a record 58 percent now backing independence, the highest ever rate of support. They also show that the SNP is on course to win every single seat in Scotland’s parliamentary elections next year, bar one.

That would put them in an astonishing position of power and the SNP would feel entitled to demand another independence referendum, justifying it as the will of the people. It would be hard to argue against.

The SNP has also seized on the fact that the Brexit deal will result in reduced access to cod and haddock for Scottish fishing fleets. Fergus Ewing, the Scottish cabinet secretary for the rural economy, said of the deal, “This is a terrible outcome for Scotland’s coastal communities.”

In contrast, the UK’s negotiating team feels the deal will result in overall net gains for Scotland’s fishing industry. But the reality is that the agreement is so complex that there will be many caveats and loopholes the Irish or Scots will seek to exploit. And these will hurt.

It could become death by a thousand cuts for the UK, and the past few days have shown how difficult it will be for BoJo to keep the ship afloat.

Many have predicted that Brexit will define his premiership. While he was the figurehead of the Leave campaign, it was Theresa May who was in Downing Street for the vast majority of the negotiation process with the EU. BoJo only took over for the final furlong and delivered a deal that some say is less generous than what May managed to get.

But the real legacy of his premiership will be whether he is able to prevent the obliteration of the UK.

If current voting trends continue, Scotland looks nailed on to have another independence referendum, and the result could be very different next time.

Northern Ireland is already being wooed by the bigger EU nation that it shares an island with.

And Wales’ independence party Plaid Cymru wants to offer an independence referendum if it gets enough votes in May’s local elections.

If the practical realities of Brexit cause problems over the first few months of 2021, Plaid Cymru could see its support rocket as the Welsh look for a way out too.

Even if many of us are distracted by the glow of the shiny, new, long-awaited Brexit deal, it’s clear that the fight to save the UK has begun.