An independent review is to take place into recent unrest in Leicester.

Officers have arrested 47 people since 28 August amid tensions involving mainly young men from sections of the Muslim and Hindu communities.

The review was agreed at a meeting of community leaders, councillors and local police on Wednesday evening, the city's mayor Sir Peter Soulsby said.

"Last night's meeting was very constructive and everyone there was determined to ensure that the recent disorder does not spoil relations in our city," Mr Soulsby told the BBC.

"My intention is to have a review of what led up to the events at the weekend, and also to seek some independent thoughts on how we all - council, police and communities - can learn from this, and what we can do at a local level to ensure it doesn't happen again."

An independent body is yet to be appointed to oversee the review. 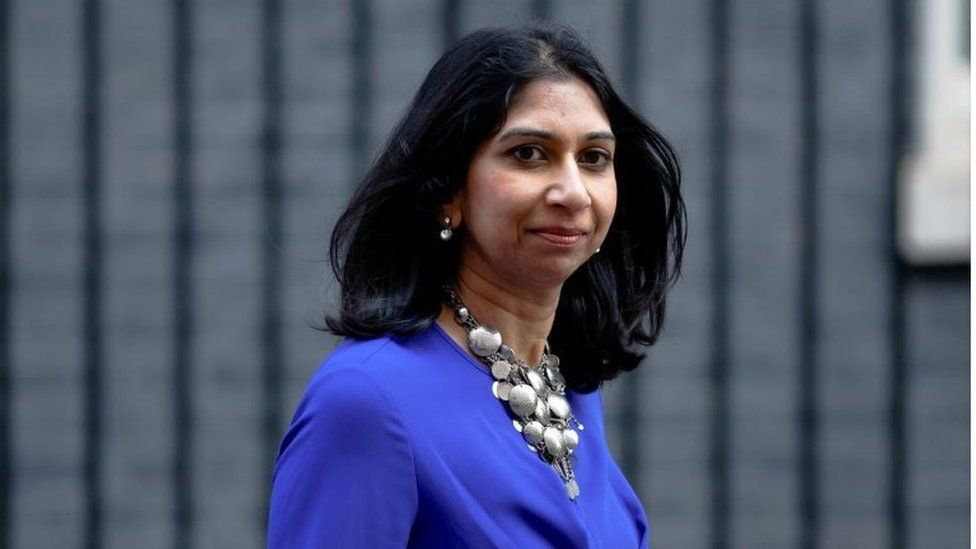 In a statement, a Leicestershire Police spokesperson said: "I can confirm the Home Secretary visited Leicester today and was briefed by Temporary Chief Constable Rob Nixon and other senior officers.

"We won't be providing any further detail in relation to the meeting."

Ms Braverman has been in regular contact with the chief constable, and the BBC understands from the Home Office that she visited to receive further updates on the disorder, and to thank police officers for their response.

Police have said they expect to arrest and charge more people over the coming weeks and months.

Mr Nixon has written an open letter to the communities of East Leicester, in which he said he wanted to clarify the police response to Saturday's protest.

Some members of the public had criticised police for appearing to support the protest, as videos were circulated online which showed officers walking alongside it.

"I am making clear that police did not support an unplanned protest in East Leicester," Mr Nixon said.

"My officers were dispatched in order to try to engage and seek co-operation. They were confronted by in excess of 300 people and there were eight officers at the time.

"They did the best they could in the circumstances by staying with them until more officers could arrive. That is what videos on social media show." 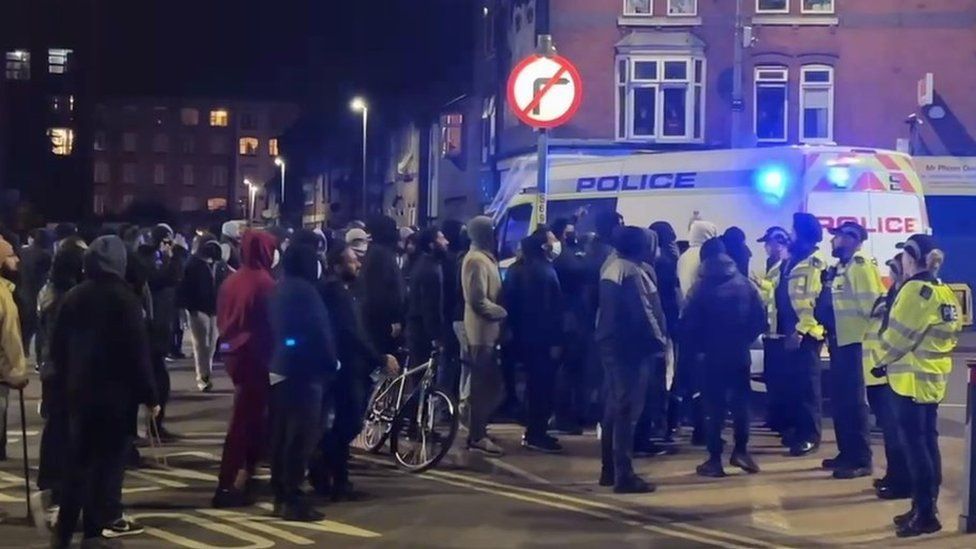 Three people have been charged so far in relation to the disorder over the weekend. They are:

*  Amos Noronha, 20, of Illingworth Road in Leicester. He appeared in court on Monday, where he pleaded guilty to possession of an offensive weapon and was jailed for 10 months.


*  Adam Yusuf, 21, of Bruin Street in Leicester. He appeared in court on Tuesday, where he pleaded guilty to possession of a bladed article and was sentenced to a year in prison, suspended for 18 months, and was ordered to do 200 hours of unpaid work.


*  Lukman Patel, 31, of Homeway Road in Leicester. He appeared in court on Tuesday, where he pleaded not guilty to possession of an offensive weapon and racially aggravated harassment/alarm/distress. He is expected to stand trial on 11 November.

When Yusuf appeared in court, the probation service told the magistrate that he had been "influenced by social media" in relation to events taking place near where he lived and was "upset".

"I suspect that social media has played a significant part in raising fear, raising concern," he previously told the BBC.

"I've seen a significant amount of fake news that is being put out on social media, a lot of images that are being used to sensationalise the activity, to try and encourage people to get involved." 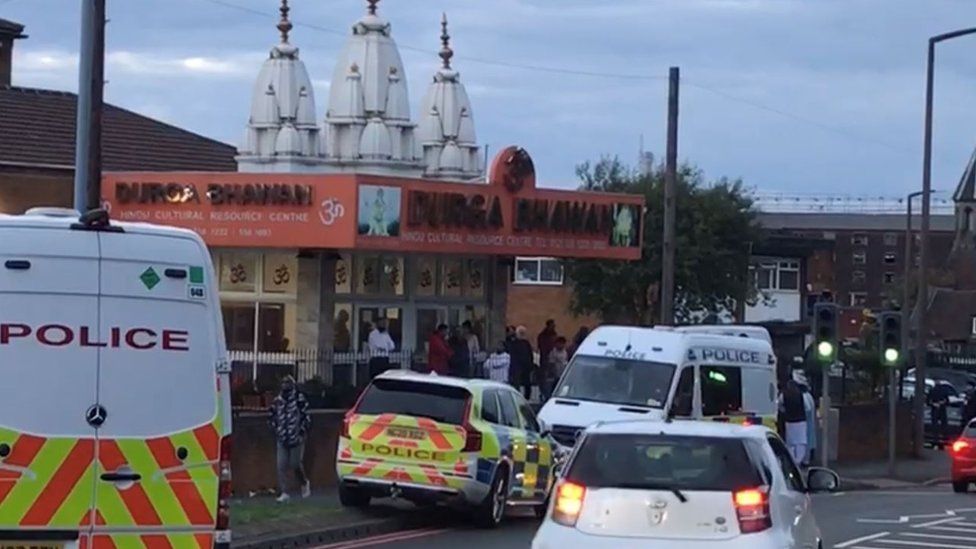 Police have said some of those involved in the Leicester disorder came from Birmingham and Luton.

There was also a protest at the gates of a Hindu temple in Smethwick in the West Midlands on Tuesday evening.

Fireworks and missiles were reportedly thrown in the direction of police, and an 18-year-old man was arrested on suspicion of possessing a knife.

London's mayor, Sadiq Khan, has described the events in Leicester and Smethwick as "ugly" and called for solidarity.

"British Hindus and British Muslims have far more in common than that which divides us - and we should be eternally on our guard against extremist forces who seek to stoke up tensions between our communities for their own selfish ends," he said.

Police have encouraged people to prepare for Navratri and Diwali as normal, and said a "visible and strengthened police presence will be there for all communities".