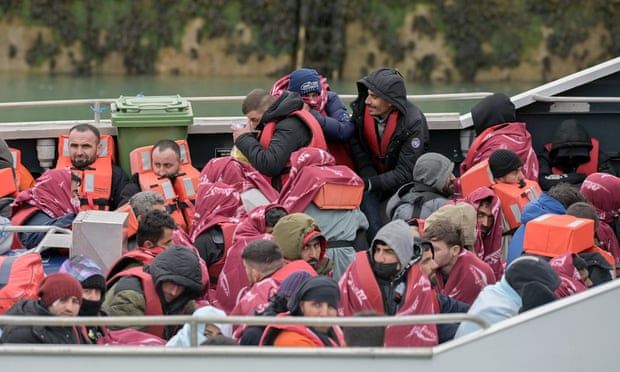 Legal cases may explain why Rwanda plan is not working, suggests No 10

Legal challenges to the policy of deporting asylum seekers to Rwanda could be a reason why the plan has not yet, as intended, started to deter unofficial Channel crossings, Downing Street has said.

After a period without significant numbers of crossings amid bad weather, several hundred of people made the journey in recent days, bringing the total to more than 7,000 so far this year. It is the first time this has happened since the passing of the nationalities and borders bill, which set out the policy framework.

Asked if Boris Johnson was disappointed the plan had not as yet deterred such crossings, the prime minister’s official spokesperson said that a series of legal challenges to the plan could be part of the reason.

Asked when it would be possible to know if the policy was working, he said: “I don’t think there’s a fixed date. Obviously, there are a number of variables we need to deal with, not least some of the legal challenges which have been talked about.”

Questioned on whether he believed would-be asylum seekers in France were reading about the legal cases and thus deciding to risk the crossing, he said: “I’m not seeking to prescribe motivation to individuals. I’m simply setting out some of the challenges that this policy has, that we expected from the start. And that’s what we’re seeing.”

Under the plan, people who arrive in the UK via unofficial routes, such as on small boats crossing the Channel, could be deported to Rwanda. Their asylum claims would then be assessed with a view to remaining in the African country, with no prospect of living in the UK.

In one pre-action letter sent to the Home Office, which is likely to lead to a judicial review claim, the solicitors Leigh Day stated that the charity Freedom from Torture “has serious concerns about the lawfulness of the policy”.

It has requested “disclosure of information regarding the policy”, including documents outlining it, risk assessments and the memorandum of understanding signed by the UK and Rwandan governments.

When the policy was announced, the stated plan was for the first deportation flights to leave by the end of May. Asked about the timetable, Johnson’s spokesperson said this had slipped.

He said: “We still aim to have the first flights leave in a matter of months, but because of some of those challenges it’s hard to put an exact time on it.”

The plan was, he said, “to move ahead with this as soon as possible”, but the government was “not unexpectedly seeing some of these legal challenges, and in a free and democratic society we need to engage with those in the normal way. But we are still planning to move ahead with the flights at the earliest opportunity.”
#boris johnson  #johnson
Add Comment