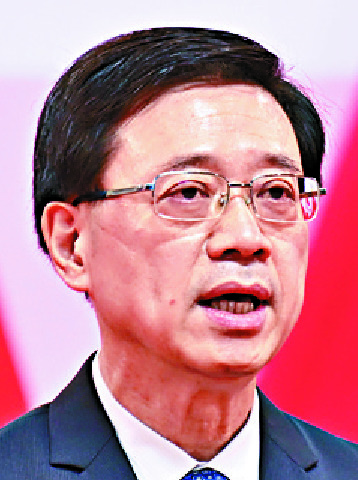 Chief Secretary John Lee Ka-chiu said he is "open-minded" toward whether a registration or licensing system should be introduced for the media, including online media.

In a TVB program yesterday, he said authorities are studying different options on how to regulate fake news, including the removal of problematic content and criminalizing the release of such news.

Lee said regulating information is necessary as "the destructive power of fake information and fake news spreading on the internet and amongst society is huge, including defamation that could lead to bullying and suicidal cases."

"We hope to safeguard freedom of information while having regulations so [information] will not be misused to conduct actions that are illegal or harm others."

Lee said the government will conduct legal research as soon as possible, adding that they will take reference from countries that practice common law.

He said other countries have two approaches to regulating fake information; the first is removing the content and the other is criminalizing the spreading of fake information.

In response to whether media outlets such as those that cater to online platforms will be regulated through a registration or license system, Lee said he remains open-minded and will not come to a conclusion on the spot.

"We mainly target the content of the message, not the platform," he said, explaining that media platforms may simply be receiving fake information from others.

When asked whether there's still an urgency to regulate information as fake information seemed to decrease since the social unrest in 2019 subsided, Lee acknowledged that the volume of fake information may not be as "crazy" as before but it still exists.

He added that the government should be prepared to prevent future "danger," emphasizing that any legislation should be established based on actual needs.

This came after police imposed a controversial move last year to stop recognizing press accreditation issued by journalist associations such as the Hong Kong Journalists Association.

It restricts journalists who are not registered with the government's Information Services Department and who are not members of internationally recognized foreign media outlets from accessing their press briefings and restricted areas.

Leung made the proposal as he felt there are allegations that have incited the public's hatred against the police such as the rumored deaths at Prince Edward Station on August 31 in 2019 and rape that allegedly took place in San Uk Ling Holding Centre.

He blamed the now folded Apple Daily and claimed it was a "rumor production base" during the Occupy Central movement in 2014 and social unrest in 2019.
#facebook
Add Comment