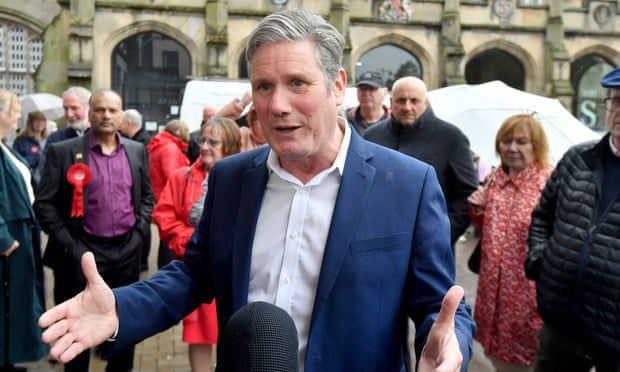 A barrister specialising in lockdown rules has said a leaked document showing Keir Starmer attended a prearranged meal in Durham during an election could be used to clear the Labour leader of allegations that he broke the law.

The document, published by the Mail on Sunday, shows that an 80-minute dinner with the Labour MP Mary Foy, featuring a takeaway curry, was planned as part of his schedule.

The newspaper claimed that the document showed that the event was prearranged, “so no different from the No 10 events”.

Conservatives argued the memo was evidence the meal was in breach of lockdown rules because it showed that it was prearranged to take place between 8.40pm and 10pm, and not just a spontaneous decision to order food.

But Adam Wagner, a human rights barrister from Doughty Street Chambers, said he did not think the leaked memo showed that Starmer had broken any rules.

“Seeing that this was a scheduled event as part of the leader of the opposition’s visit to Durham – during a local election campaign, an event focused on him being with a local MP and their staff, and it was in the evening and food was ordered because it was the evening – I don’t really see how it could be a breach of the regulations.

“The regulations allowed for any gathering that was reasonably necessary for work or voluntary activity. And obviously the purpose of that visit overall was for the leader of the opposition to visit the local campaigners and the local MP and that is all on the schedule.

“So the police would have to say, ‘Well we actually disagree with the Labour party’s analysis of what was reasonably necessary for the leader’s trip to Durham’ and I am doubtful that they could really go behind that reasoning,” he said.

“The issue with the Downing Street events was that they were prearranged social events.

“Those being investigated are the ones where it’s quite obvious that the purpose of the event was social – a Christmas party, a leaving party, a birthday party.

“Whereas the fact that this [Starmer event] is preplanned, I think shows the opposite. It shows that the purpose was political.”

He also argued that the event was analogous to the Downing Street gathering where Johnson and his staff were photographed drinking wine and eating cheese in the No 10 garden where they were said to be discussing work matters.

That event was not investigated by the Met, Wagner pointed out.

Wagner said the decision by Durham police to launch an investigation could lead to demands for Boris Johnson to release his schedule.

“Are they going to look at the prime minister’s schedule and at every time he ate, during trips to various constituencies during last year’s local elections, and ask if that event was reasonably necessary?” he said.

Durham police should also explain why the force is investigating Starmer two years after the event when it refused to investigate Dominic Cummings because of a policy not to take “retrospective action”, Wagner said.

He added: “The first question for Durham police is: what is their policy and are they applying it consistently?

“I think it would be unlawful if the reason they’re investigating is because they’re under lots of pressure from the newspapers and politically.”

Another prominent lawyer said he believes the leaked memo puts Starmer in a difficult position.

Matthew Scott, who publishes articles under the name BarristerBlogger, tweeted: “This is awkward for Starmer. Curry was planned in advance, at the end of the working day.”
#boris johnson  #johnson
Add Comment