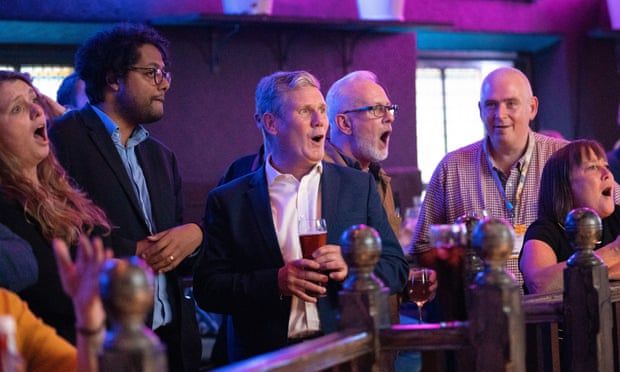 Labour members tore into rule changes proposed by Keir Starmer to give MPs more sway over leadership elections, but the new rules were carried over the line after the trade union Unison gave its backing at the last minute.

The narrow victory on conference floor ended a difficult week for Starmer, in which he was repeatedly forced to water down his proposals, though his allies said he was thrilled with the final result – 53% in his favour – which he has said would draw a line under internal party debates.

The changes will double the threshold of MP nominations needed for candidates to make future leadership ballots, which the left has said will ensure a less diverse shortlist. It will also make it harder for members to deselect MPs.

After the result, Starmer heralded the changes, saying they “represent a major step forward in our efforts to face the public and win the next general. The Labour party is now relentlessly focused on the concerns of the British people and offering them a credible, ambitious alternative to this government.”

Before the vote, shadow cabinet ministers were dispatched to lobby members and trade unionists with rumours that Starmer could lose it. But with hours to go, Unison delegates opted to back the changes, giving him a near-certain win.

But the debate in the conference hall, watched by Starmer from the stage, was dominated by criticism of the Labour leader and the proposals. Dave Ward, the general secretary of the CWU union, said conference was being misled over the rule changes. “We have not been consulted, which is what I believe has been briefed. We feel we have been bounced and even at this late stage I think Keir should reflect on this.”

One delegate said the changes would have prevented “Labour giants” from reaching historical ballot papers, including Margaret Beckett, Ed Balls, Andy Burnham and Diane Abbott. “In 2020 we would have been faced with Keir Starmer or Keir Starmer,” he said.

The shadow work and pensions secretary, Jonathan Reynolds, took to the podium amid the critical speeches to make the case for the rule changes – especially those protecting MPs from deselection challenges. He said the trigger ballots, which were made significantly easier under Jeremy Corbyn, had taken up crucial time before general elections. “We are sending MPs out to fight the Tories with one hand tied behind our backs,” he said.

At the end of the debate, the MP Shabana Mahmood said the rule changes were necessary for the party to be able to focus on the debate in the country. “If you cannot persuade a fifth of your colleagues, then you will struggle to persuade the country to make you their prime minister,” she said.

She said the parliamentary party – in which women are now the majority – would not allow the rule change to deliver an all white male shortlist. “The idea that we will stand by and deliver a pale, male and stale future leadership contest, then you are having a laugh,” she said.

Mahmood said changes to end registered supporters paying to join to vote for the leadership would end elections being skewed by non-members. “You do not join for one man or one woman, you join for the movement. These changes restore the proper place and rights of members,” she said.

After the vote, a senior Labour source said they were jubilant at the changes. “It’s shutting the door on entryism … No more buying a vote in a leadership election. We are a serious party again.”

But the grassroots movement Momentum said it was “a needless self-inflicted blow to democracy in our party, delivered against the opposition of Labour members. It was Unison’s delegation breaking their own policy that swung it for the leadership and the Labour right.”

In another significant change the party endorsed a new independent complaints process, prompted by the Equality and Human Rights Commission (EHRC) report into antisemitism in the party. The watchdog had ordered the party to make the changes.

Before the debate, delegates were warned repeatedly against booing or heckling the speakers and flags were banned from the hall. But there was a standing ovation in the hall for the former MP Ruth Smeeth, a leading figure in the Jewish Labour movement, who spoke in favour of the EHRC changes, saying it would “send a message to the vile racists and bullies who thought that our party could be a home for Jew hate”.

Smeeth said she still did not feel safe in the party. “This is my 22nd Labour conference, and yet I feel sick about the idea of being in Brighton, knowing I will be a target for yet more racist abuse. But I am here, to help deliver the promise that Keir made when he became leader.”

The changes were opposed by Momentum, which said there were serious concerns about the power the general secretary would have over an independent process.

A Momentum spokesperson said: “The proposals we are voting on today are a flawed interpretation of the report. The EHRC report itself described the general secretary’s office as a political organ – so review boards and complaints panels which are accountable to the general secretary cannot, by definition, be independent.”

Mahmood, the chair of Labour’s national executive committee disciplinary panel, said the rule changes would apply to all forms of discrimination and racism. Mahmood said she had “watched my fellow members of my Labour family have their hearts broken because of hatred they have seen … it has been a shameful period in our history.

“Today we decisively turn the page and we apologise unreservedly to our Jewish members and to the wider community and we resolve that no community will ever go through this pain again.”
Add Comment