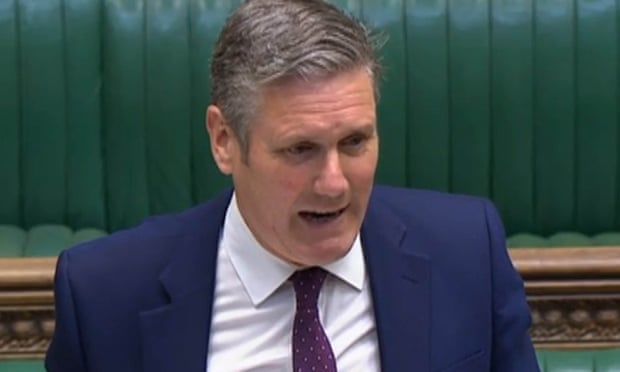 At least 90 jobs may go in bid to repair party finances, while NEC will also consider proposals to bar far-left factions

Labour’s ruling national executive committee is to discuss plans for large-scale redundancies among staff, with at least 90 jobs at risk, as Keir Starmer seeks to repair the party’s shattered finances.

The Guardian understands NEC members will receive the findings of a report called Organise to Win, which has examined how best to restructure the party to approach future general elections.

Labour’s general secretary David Evans hopes to achieve the planned cuts through a voluntary severance scheme – but 90 redundancies would amount to around a quarter of Labour staff.

A Labour insider said: “This is not an easy decision and we recognise it will be a very difficult time for staff and we will fully engage and consult with them and the trade unions throughout. We are reshaping our party’s operation with a view towards being fighting fit for upcoming campaigns and the next general election.”

Labour’s finances have been hit hard by fighting three general elections in the past six years, as well as a string of costly legal cases, and hopes of a membership bounce after Starmer took over failed to materialise.

The party paid out a six-figure sum a year ago to settle a case brought by seven former employees and a veteran BBC journalist, admitting it defamed them in the aftermath of a Panorama investigation into its handling of antisemitism.

Labour’s most recent annual report showed that 367 staff were employed by the party as at 31 December 2019, just after that year’s general election, many of them at its Southside headquarters in Victoria.

There have already been some layoffs among community organisers – the grassroots campaigners favoured by Corbyn, but regarded by sceptics as duplicating work done by existing local activists.

Starmer is in the process of shaking up his own team, with a chief of staff and permanent director of communications yet to be recruited after a number of key departures.

As well as discussing the redundancy plans at the meeting on Tuesday, the NEC will also be asked to approve proposals to proscribe four far-left factions from the party.

The groups are accused of downplaying antisemitism, or harbouring members expelled for extreme views.

Labour’s biggest donor, the Unite trade union, attacked the plans on Monday, saying: “While working-class communities are continuing to bear the brunt of the sickness and employment worries made much worse by Conservative mishandling of the pandemic, Labour is abandoning the field of battle against this government to turn its fire on its members instead.”

The union added that such “acts of political machismo” create a “sense of despair among voters who see a party at perpetual war with itself”.

Starmer’s predecessor Jeremy Corbyn remains suspended from sitting as a Labour MP, after appearing to downplay the scale of the problem of antisemitism when the Equalities and Human Rights Committee published its damning report on the issue.

The groups affected by the proposed ban are Resist and Labour Against the Witchhunt which claim antisemitism allegations were politically motivated; the Labour In Exile Network, which expressly welcomes expelled or suspended members; and Socialist Appeal, a group that describes itself as a Marxist voice of Labour and youth.

Starmer has a supportive majority on the NEC, so the plans are expected to be agreed. Anyone found to be a member of any of the four groups could then be automatically expelled from the Labour party.

The plan has also been vehemently opposed by grassroots campaign group Momentum, set up to back Corbyn’s leadership.

“We oppose guilt by association,” Momentum said in a statement. “The Labour party has always been home to a wide range of political traditions and we have a responsibility to work with each other to build support for socialist ideas and policies.”
Add Comment