Thousands of veterans took part in the parade down Whitehall

The King has honoured the nation’s war dead for the first time as monarch and laid a wreath at the Cenotaph in remembrance of all those who have made the ultimate sacrifice.

Thousands of veterans proudly wearing their medals, military families and the public packed Whitehall for the Remembrance Sunday ceremony and watched as Charles placed his floral tribute at the base of the memorial on Whitehall.

In recent years, Charles had performed the role on behalf of the Queen as the Prince of Wales, but as the first chimes of Big Ben rang out at 11am on Sunday and a two-minute silence began, he stood before the Cenotaph in his role as head of state.

A volley from a gun fired by the King’s Troop Royal Horse Artillery from nearby Horse Guards Parade rang out to signal the start of the moment of silent reflection, punctuated by the sound of London traffic, and another loud blast marked its end. 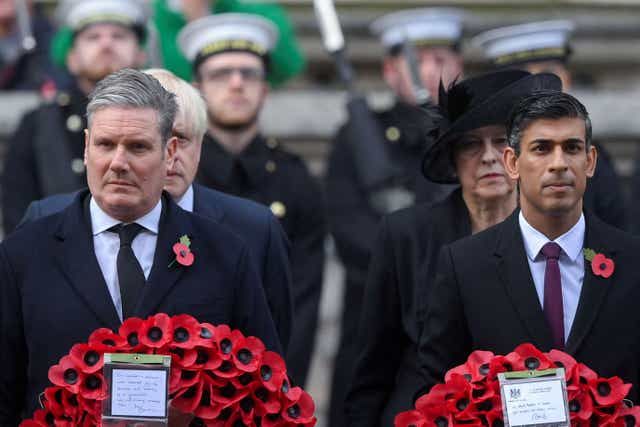 Charles laid his wreath, its design a tribute to ones used by his late mother and grandfather George VI and it featured his racing colours, after buglers from the Royal Marines played the Last Post.

The wreath was soon joined by others left by the Prince of Wales, the Earl of Wessex, and the Princess Royal, with the Queen Consort’s assistant equerry, Captain Edward Andersen, laying her tribute.

Prime Minister Rishi Sunak also paid tribute to the fallen on behalf of the Government by leaving a wreath, followed by Labour leader Sir Keir Starmer, other party leaders, senior members of the Cabinet, military chiefs of staff and high commissioners.

Watching from the balcony of a Government building was Camilla and the Princess of Wales, and nearby on another balcony was the Countess of Wessex and the Duke and Duchess of Gloucester. 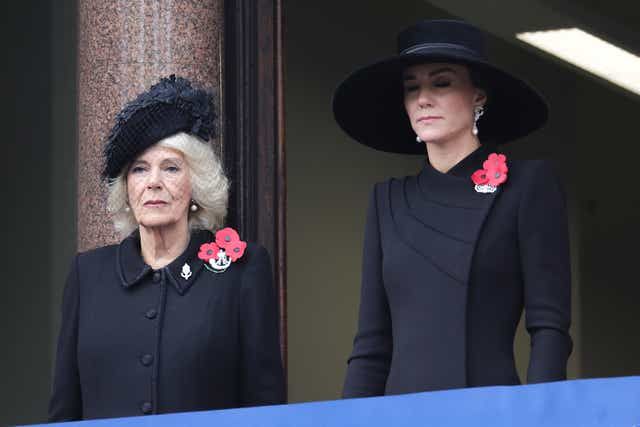 The Remembrance Sunday ceremony has added poignancy this year as it is the 40th anniversary of the Falklands War, with former veterans marching past the Cenotaph.

Retired Brigadier Jon Mullin, who served as a Lieutenant in the 9 Parachute Squadron Royal Engineers during the conflict, is marching with South Atlantic Medal Association 82.

Reflecting on the sacrifices made to liberate the Falklands, he said: “I wanted to be part of a national commemoration to commemorate all those people who did this wonderful feat of arms and put it all together, and many have passed on in the intervening years.

“I think it’s important that the nation doesn’t forget the sacrifices.” 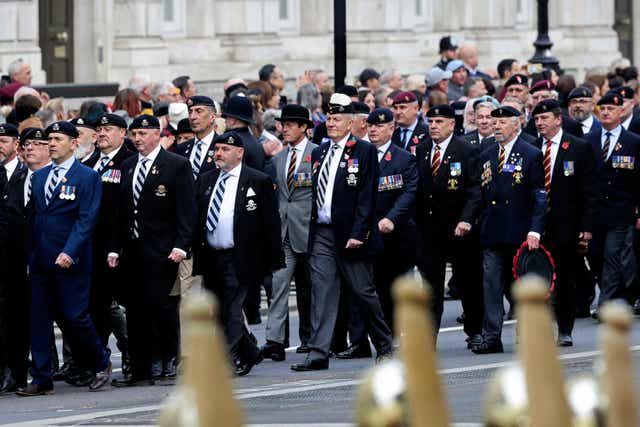 Chief of the Defence Staff, Admiral Sir Tony Radakin, said there is a “special poignancy” to Remembrance Sunday this year given the Queen’s death and the war in Ukraine.

In an interview broadcast on Sky’s Sophy Ridge On Sunday programme, he said: “I think Remembrance Sunday is always poignant.

“I think it’s poignant for the whole nation, this special moment when we pause to reflect on the sacrifice and commitment of others to provide our freedom today.

“I think there’s a special poignancy this year with both the loss of Her Majesty, another loss of a Second World War veteran.

“I also think it’s poignant when we have once again the spectre of war in Europe and all that that entails, and a country that’s been invaded and is fighting for its freedom.”