King Charles and the Prince of Wales have made a surprise appearance to meet people queuing to see the Queen lying in state.

They thanked those who had been waiting through the night, with Prince William telling a child: "You're over halfway."

He also said how much it meant to his family that so many were queuing.

Organisers have now announced that the accessible queue has reached full capacity and has permanently closed, with all time slots allocated.

The Department for Digital, Culture, Media and Sport has asked people not to attempt to join that queue.

As the King and William walked up and down the queue on Saturday, there were cheers of God Save the King, God Save the Prince of Wales and hip hip hooray.

The King, referring to the cold temperatures overnight, told one person waiting in the queue: "I hope you didn't get too frozen."

Anyone hoping to pay their respects has until 06:30 BST on Monday when the lying-in-state will end.

But the queue will be closed well before this so that people do not join the line and fail to reach Westminster Hall in time.

One woman in the queue told the Prince of Wales she had been queuing for 13 hours already. He replied: "Thirteen hours? You're looking very good on 13 hours."

Those waiting in Lambeth, south London, told the pair the wait was "worth it" but William said he was sorry they had had to wait for so long.

The prince commented to one person waiting that their trainers were a good choice of footwear for the queue.

Several people cried after meeting Prince William, and one woman told him: "You'll be a brilliant king one day." 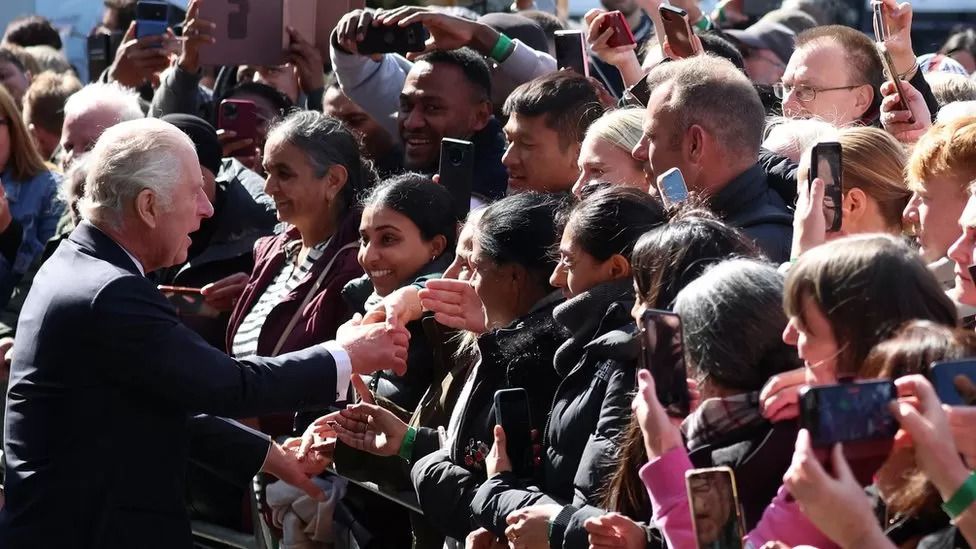 King Charles left around 20 minutes after arriving and was driven back to Buckingham Palace, but his son stayed longer to speak to more people.

The beginning of King Charles's reign has seen the Royal Family take part in several walkabouts and meetings with the public.

On Saturday afternoon, the Earl and Countess of Wessex met crowds outside Buckingham Palace, shaking their hands and thanking them for their support.

The Queen's youngest son could be heard asking mourners where they had come from and whether they were making their way to Green Park to lay flowers.

The pair had been at a lunch held inside the palace by the King and Queen Consort for governors-general from Commonwealth countries.

Representatives from Antigua and Barbuda, Australia, the Bahamas, Belize, Canada, Grenada, New Zealand, Papua New Guinea, Saint Lucia, Saint Vincent and the Grenadines, the Solomon Islands and Tuvalu were among those present, along with the Prince and Princess of Wales. 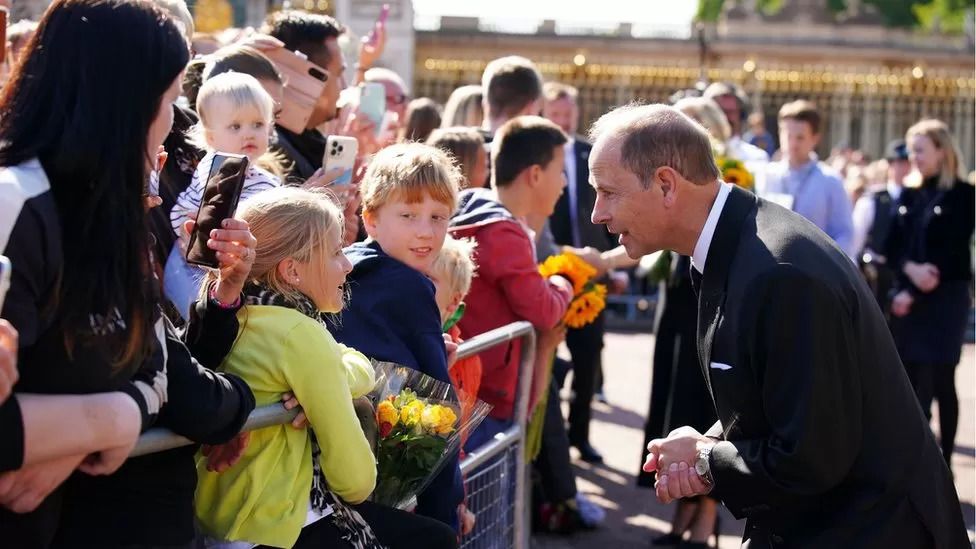 Prince Edward and his wife, Sophie, Countess of Wessex, took time to speak to people outside Buckingham Palace

The Prince of Wales, his brother the Duke of Sussex and their cousins stood guard around the Queen's coffin on Sunday evening, a day after their parents held their own vigil at Westminster Hall.

Prince Harry was given permission by the King to wear military uniform for the ceremony.

Prince Andrew was also allowed to wear his military uniform as he stood guard on Friday. The 62-year-old stepped down as a working royal in 2019, after a Newsnight interview about his relationship with the late sex offender Jeffrey Epstein.

The prince was later stripped of his military titles.

During the vigil, Harry stood at the foot of the coffin, with William at the head. They were joined by their cousins Princesses Beatrice and Eugenie, Peter Phillips, Zara Tindall, Lady Louise Windsor and James, Viscount Severn.

Ahead of the vigil, Beatrice and Eugenie paid tribute to their "dear Grannie", saying: "It has been the honour of our lives to have been your granddaughters and we're so very proud of you."

Saturday is the third full day the Queen's coffin will lie in state in Westminster Hall, where she will remain until the morning of the funeral, on Monday.

The funeral will then take place at Westminster Abbey at 11:00, after which she will be laid to rest alongside the Duke of Edinburgh in the Royal Vault in St George's Chapel at Windsor Castle. 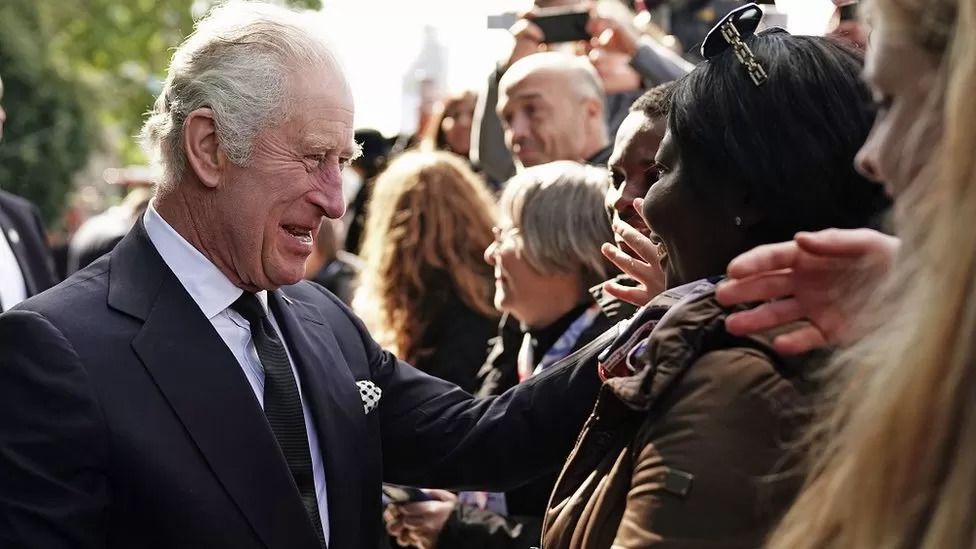 Foreign dignitaries are travelling to London ahead of Monday's funeral, which will be one of the biggest diplomatic events of recent years, with some 500 heads of state and other dignitaries expected to attend.

Canada's Prime Minister Justin Trudeau signed a book of condolences in Lancaster House and issued a statement in which he said he benefitted from the Queen's "counsel, her thoughtfulness, her curiosity, her sense of humour, and the engagement that showed a deep, deep and abiding interest in and love for Canadians".

The book was also signed by New Zealand PM Jacinda Ardern who afterwards spoke of what she called the Queen's incredible connection to her country. 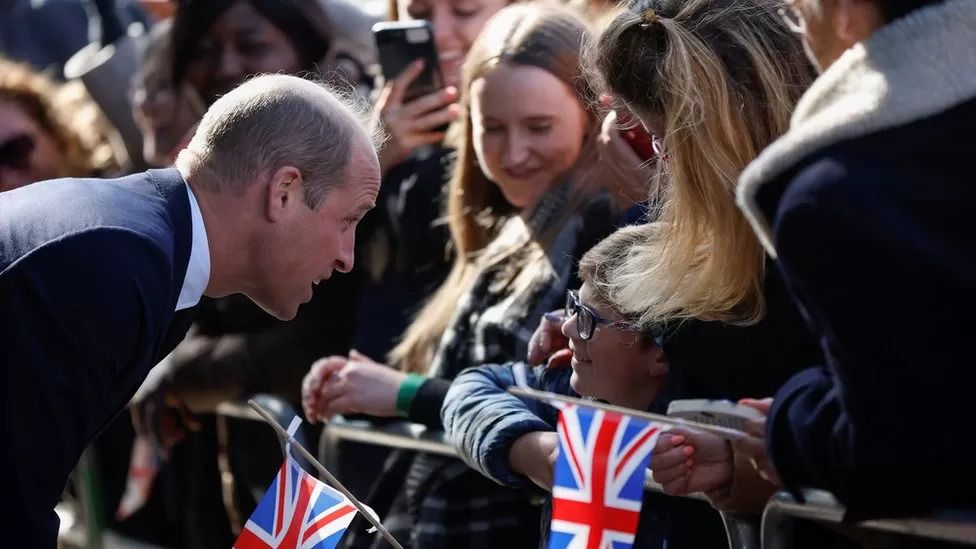 The King also met the heads of the armed forces at Buckingham Palace on Saturday and visited the Metropolitan Police's headquarters, New Scotland Yard.

A senior Metropolitan Police officer described the Queen's funeral as "the largest single policing event [the force] has ever undertaken". 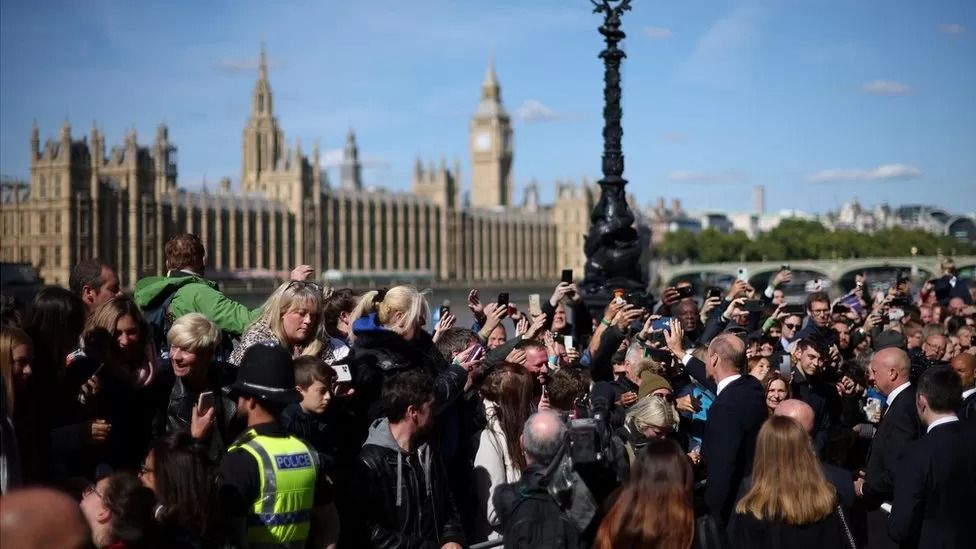 Late on Friday night, police arrested a man who left the line of mourners inside Westminster Hall and approached the coffin. He was arrested under the Public Order Act and taken into custody.

People who wish to pay their respects virtually can watch a BBC live stream and a dedicated queue tracker has been published by the Department for Digital, Culture, Media and Sport.

A national one-minute silence will take place at 20:00 on Sunday.

Watch: Mourners greeted by King and Prince William in queue