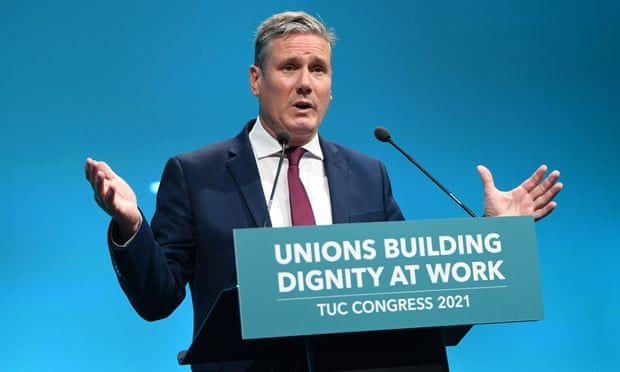 Keir Starmer has told how his father worked 13-hour days on a factory floor to support his family and still felt “looked down on”, as he pledged to overhaul workers’ rights including a £10 minimum wage and an end to zero-hours contracts.

In his speech to the TUC conference, the Labour leader said his party would offer a clear contrast with the Conservatives’ offer to workers, highlighting the government’s national insurance rise, pay freezes for key workers and the universal credit cut.

Starmer said Labour would also raise sick pay – which the party plans an imminent consultation on – and reiterated pledges to end fire-and-rehire practices.

He said: “When I think about a new deal for workers I think of my dad. He worked on the factory floor all his life. Going to work at eight in the morning, home for tea at five, back to work six till 10 o’clock at night, five days a week. He did that to provide for our family.

“So the starting point is a job to raise a family on. That means a real living wage.”

Starmer said he wanted to restore workers’ pride in their professions by investing in new, skilled industries – including £30bn of investment to create 400,000 jobs in manufacturing and low-carbon industries.

“Despite being a skilled toolmaker throughout his working life, my dad thought people looked down on him because he worked on the factory floor. He was right about that,” Starmer said.

“The next Labour government will strive for better prospects and dignity for all workers, not just those with a degree. That starts by creating quality jobs across our country.”

Starmer said Labour’s offer was a stark contrast to the Conservatives’ most recent politics, including “a broken promise on national insurance raising taxes on working people; inadequate sick pay … and an unjust pay cut for our key workers in the public sector”.

He added: “The government wasted billions of pounds of taxpayer cash on dodgy contracts, vanity projects, and giveaways to their mates. They cut stamp duty for second home owners and super tax deductions for the biggest companies. They’re putting up taxes for Amazon workers but allowing Amazon to squirrel profits away in tax havens.”

In his speech, Starmer offered an olive branch to the new generation of trade union leaders elected over the past year, including Unite’s Sharon Graham. Her predecessor Len McCluskey attacked Starmer as untrustworthy in a piece for the Guardian on Tuesday, saying he had reneged on a deal to restore the Labour whip to Jeremy Corbyn.

Graham has pledged to keep more distance from the party than her predecessor but may also reappraise the funding the trade union has given the party.

The union’s executive committee has also voted in favour of refusing to approve the Labour general secretary, David Evans, at conference, an embarrassment for the party leader.

Starmer said Labour could end the unfair working practices unions fight against – but underlined the need to focus on winning back voters. “We have an obligation to unite and work together,” he said, a hint at the divisions that still hamper the party.

“If we do we can take on this rightwing government, win the next general election, and deliver the transformational change working people so desperately need.”
Add Comment