Sir Keir Starmer has promised a new "take back control" bill to transfer powers from Westminster to communities.

In his first speech of 2023, the Labour leader - a former Remain supporter - said he wanted to turn the Brexit campaign slogan "into a solution".

Sir Keir said the legislation would be "a centrepiece" of Labour's plans if it wins the next general election.

With the country facing severe pressure on the NHS, a wave of strike action and a cost-of-living crisis, Sir Keir said he was "under no illusions about the scale of the challenges we face".

In his speech in east London, he promised a "decade of national renewal" under Labour and "hope" for the future.

But the Labour leader warned his party "won't be able to spend our way" out of the "mess" he said would be left by the Conservatives.

Setting out his priorities for a future Labour government, Sir Keir said he wanted to give communities "the chance to control their economic destiny".

"The decisions which create wealth in our communities should be taken by local people with skin in the game, and a huge power shift out of Westminster can transform our economy, our politics and our democracy," he said.

During the Brexit campaign of 2016, Sir Keir said he "couldn't disagree with the basic case so many Leave voters made to me".

"It's not unreasonable for us to recognise the desire for communities to stand on their own feet. It's what 'take back control' meant," he said.

"So we will embrace the 'take back control' message but we'll turn it from a slogan to a solution. From a catchphrase into change."

Sir Keir was Labour's shadow Brexit secretary under Jeremy Corbyn between 2016 and 2020, when he unsuccessfully campaigned for a second EU referendum.

Asked by reporters whether he now regretted supporting a fresh vote, Sir Keir said: "Even in those turbulent years, 2016 to 2019, I was always making the argument that there was always something very important sitting behind that leave vote.

"That phrase 'take back control' was really powerful, it was like a Heineken phrasing, got into people.

Labour said the bill would give English towns and cities the tools to develop long-term plans for economic growth, creating high-skilled jobs in their areas.

The party said there would be "a presumption towards moving power out of Westminster", with local leaders able to bid for any powers which had already been devolved elsewhere. 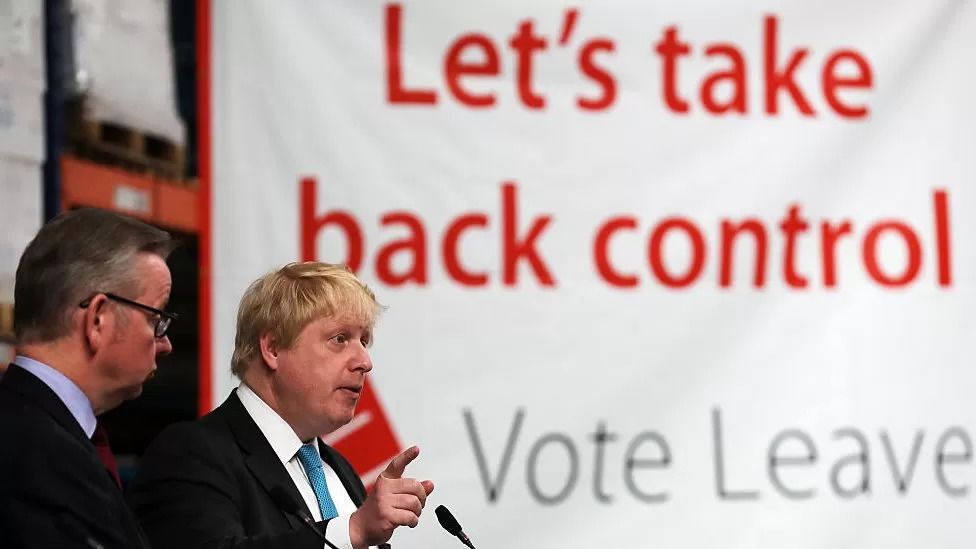 "Take back control" was used by the Vote Leave campaign, including Boris Johnson
Elsewhere in his speech, Sir Keir accused the Conservatives of "sticking plaster politics", saying they had failed to address long-term issues.

Although he acknowledged investment was needed after the "damage" done by the Conservatives to public services, he warned Labour would not be "getting its big government chequebook out".

By suggesting a move away from big increases in public spending, Sir Keir appeared to distance himself from his predecessor as Labour leader, Mr Corbyn.

Pressed by the BBC's Chris Mason over whether a Labour government would spend any more than the Conservatives, Sir Keir said he would make "different choices" but any commitments would be fully costed.

He said the party would inherit "a broken economy" and with the tax burden already high there was not scope for big tax increases.

Sir Keir also said he wanted a Labour government to work with business to deliver its aims.

Asked by reporters whether there was more scope for private sector involvement in public services, Sir Keir said trying to deliver everything through the state did not work and he was instead proposing a "partnership model" with private business.

Sir Keir's speech made no mention of abolishing the House of Lords - a proposal which was unveiled by Labour in a report last month.

But the Labour leader denied he had "gone cool" on the idea, saying it was a "key part" of the party's report on constitutional change.

The speech provoked criticism from some on the left of the Labour Party.

Former shadow home secretary Diane Abbott, who is a close ally of Mr Corbyn, said a "take back control" bill was an "empty promise" without new money to go with it.

Labour councillor Martin Abrams, a committee member of the Momentum campaign group, said Sir Keir's speech was "totally out of step with the scale of the crisis facing us" and the reference to private sector partnerships "makes people's hearts sink".

The speech came a day after Rishi Sunak set out his own priorities for government at a venue just a short distance away.

Foreign Secretary James Cleverly said Mr Sunak's five pledges were in contrast to Sir Keir's speech, which he claimed made "no firm commitments".