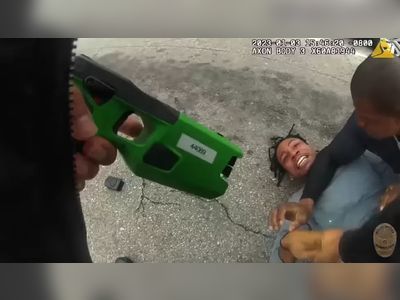 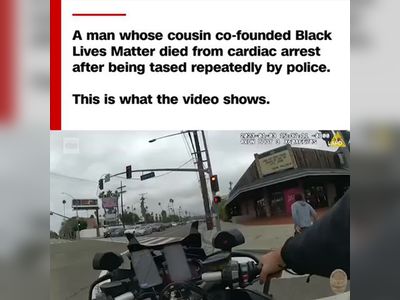 Keenan Anderson, 31, a teacher and father, died at a hospital in Santa Monica.

It shows Mr Anderson begging for help as officers hold him down.

The police who tasered Mr Anderson were called to a traffic accident in the Venice neighbourhood of Los Angeles at around 15:00 local time.

Police chief Michel Moore told a news conference on Wednesday that Mr Anderson had committed a felony hit-and-run in a traffic collision.

He said Mr Anderson had attempted to flee the scene by trying to "get into another person's car without their permission".

Footage shows Mr Anderson in distress when police arrive, telling the first officer "somebody is trying to kill me", although no visible threat appears on camera.

Initially, Mr Anderson sits down as directed but as more police arrive he gets up and runs into the street while ignoring requests for him to stop.

When police reach Mr Anderson and attempt to detain him, he is initially compliant before shouting: "Please" and "help" and "they're trying to George Floyd me!" - a reference to the May 2020 murder of a black man in Minneapolis, Minnesota, by a policeman.

The stun gun was initially used on Mr Anderson for about 30 seconds after an officer warned him multiple times to "stop [resisting arrest] or I'm going to tase you". Other officers were holding him down. He was then tasered again for roughly five more seconds.

An ambulance arrived about five minutes after he was tasered, police said, and brought Mr Anderson to a local hospital. He died about four-and-a-half hours later after going into cardiac arrest, according to police.

A toxicology report produced by the LAPD showed that Mr Anderson's blood tested positive for cannabis and cocaine. The Los Angeles County coroner's office will conduct a separate report.

The footage adds to pressure on the LAPD, whose encounters with black and brown men have resulted in three deaths in under a week.

Takar Smith, 45, and Oscar Sanchez, 35, were both shot dead by officers at the start of January.

Mr Anderson lived in the Washington DC area and was visiting Los Angeles. His death has renewed calls from activists for police reform, some of whom believe gun-carrying police should not be deployed to traffic accidents.

Patrisse Cullors, Black Lives Matter co-founder and Mr Anderson's cousin, told the Guardian: "My cousin was asking for help, and he didn't receive it.

"My cousin was scared for his life. He spent the last 10 years witnessing a movement challenging the killing of black people.

Ms Cullors and others are calling for the LAPD police chief to resign.

Mr Moore said he had expedited the release of the video footage of Mr Anderson due to public interest. He said it normally takes 45 days.