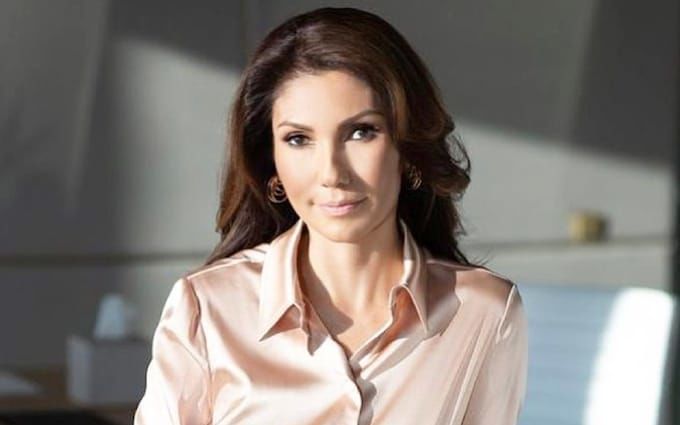 The daughter of the former president of Kazakhstan went on a spending spree in London after moving $300 million of her personal wealth out of the country. Aliya Nazarbayeva's purchases included a $25m private jet, an £8.75m house in Highgate and even a private bank.

Aliya Nazarbayeva instructed two professional financial advisers to buy palatial homes, a private bank and a luxury jet after transferring the money into a complex web of offshore trusts and companies stretching from Liechtenstein to the British Virgin Islands.

Her purchases included a $25m Challenger Bombardier private jet, an £8.75m house in Highgate, north London - meant to help her obtain British residency - and instructing her team to buy a $14m of property in Dubai, including a villa in the man made Palm Jumeirah island.

Details of the 2006 spending spree, revealed for the first time on Saturday, are likely to raise eyebrows in Kazakhstan, which has been hit by violent protests aimed at the country's increasingly maligned elite.

Aliya is the youngest daughter of Nursultan Nazarbayev, who was Kazakhstan's president for 28 years until 2019, when he took a backseat but controversially retained much of his power.

While he led the country during and after its Soviet years, a small minority amassed enormous wealth while many ordinary Kazaks struggled to get by.

He dramatically quit as head of the Kazakh Security Council on Jan 5 and was reportedly preparing to leave the country. Authorities on Saturday insisted Mr Nazarbayev was in the capital, named Nur-Sultan in his honour.

It was earlier rumoured that Ms Nazarbayeva was seeking to travel to Dubai with her father as he tries to flee the upheaval, and that she may hope to use London as a secure base.

Her spending spree in London, described by one expert as “staggering”, only came to light when she fell out with the two financial advisers, accusing them of dishonesty, misappropriation of funds, conspiracy to defraud, breaches of fiduciary duty and unjust enrichment.

Ms Nazarbayeva, 41, sued the pair in the High Court in London for £165 million before settling the case in a confidential agreement. Her advisers, described as reputable and respected financial professionals, denied all the claims. Details of the 2016 case have only just emerged.

Until now Ms Nazarbayeva - whose eldest sister Dariga owns £80m of property in London - was better known for modelling designer jewellery by Damiani, promoting her own couture clothes brand and owning a high-end beauty spa in Almaty, Kazakhstan’s largest city, as well as chairing a construction company.

On her Instagram account she frequently posts photos of herself with her father, who until his fall from power cultivated the image of “father of the nation”.

The Nazarbayev family have long established financial links with the UK. The Kazakh oligarch paid Prince Andrew £3 million more than the asking price for his marital home of Sunninghill Park in 2007.

Ms Nazarbayeva claimed she transferred $312m of her personal wealth out of the country after advisers told her it would be “dangerous” to keep her fortune there and that she should “hide” and “disguise” it in a network of offshore foundations and trusts, according to legal documents seen by The Telegraph.

Documents lodged with the High Court include claims that Malik Ishmuratov, a Kazakh wealth manager, told her “on many occasions that Ms Nazarbayeva was a politically exposed person (PEP)” and that it was “dangerous for her to keep her assets in Kazakhstan”.

In 2006, Ms Nazarbayeva “confided” to Mr Ishmuratov that she had “sold some shareholdings in Kazakh companies, receiving approximately $325,000,000”.

Mr Ishmuratov went on to introduce Ms Nazarbayev to Denis Korotkov-Koganovich, a Kazakh wealth manager based in London.

In 2008, according to court documents, Mr Ishmuratov advised Ms Nazarbayeva to set up the Alsarah Foundation, in Liechtenstein, “through which her funds were held and would protect and disguise her interest”.

By June 2008, Ms Nazarbayeva “agreed orally” with Mr Ishmuratov to entrust an initial $150,000,000 capital to him and Mr Korotkov-Koganovich, transferring the cash to Marstock Ltd, a company the wealth managers had registered in the British Virgin Islands.

This was the first of several large transfers from Ms Nazarbayev to the pair, eventually totalling $312m.

Ms Nazarbayev claimed that Mr Ishmuratov advised her that as a politically exposed person she wouldn’t be able to open a bank account and to get around the problem should simply buy a bank instead.

Allegedly on his recommendation, Ms Nazarbayeva directed Mr Ishmuratov to invest $108m in CBH Bank, an exclusive Swiss private bank, in return for a 51 per cent shareholding.

Her cash was also put into bonds, investment funds - including a London-based wine fund boasting valuable 18th and 19th century cognacs - and an Essex-based loans company aimed at borrowers with poor credit records.

But, when Ms Nazarbayeva’s relationship with Mr Ishmuratov and Mr Korotkov-Koganovich broke down, apparently under pressure from her father, she lodged a £165m [$233m] claim against them in the London High Court in March 2016.

She claimed that the two advisers had not followed her wishes and had allegedly profited over-and-above their 25 per cent profit agreement, as well as investing her money in transactions she had rejected, including a luxury development in the Bishop’s Avenue "billionaire’s row" in Hampstead.

She also accused them of misappropriating 75million Swiss francs, over half the money meant to buy the Swiss bank.

The pair denied the claims and maintained they had acted at all times in her financial interests.

Ms Nazarbayeva sought an injunction stopping any further dealings with her assets and seeking payment of damages and compensation, with interest. The claim was subsequently settled in a confidential agreement.

While there is no suggestion that Ms Nazarbayeva’s money was acquired unlawfully, Kazakhstan commentators say the revelations raise questions about the way her wealth was moved out of the country.

Tom Mayne, a visiting fellow at Chatham House and research fellow at Exeter University with detailed knowledge of Kazakhstan, said: “This raises many questions as to Aliya Nazarbayeva’s business dealings in Kazakhstan. The amount of money is staggering.

“This case shows how the UK is often used as a safe haven for this kind of money. People who have taken to the streets in Katakhstan look around and see the family of Nazarbayev have multi-million pound houses and millions to invest in what they want.”

Ms Nazarbayeva did not respond to a request for comment.