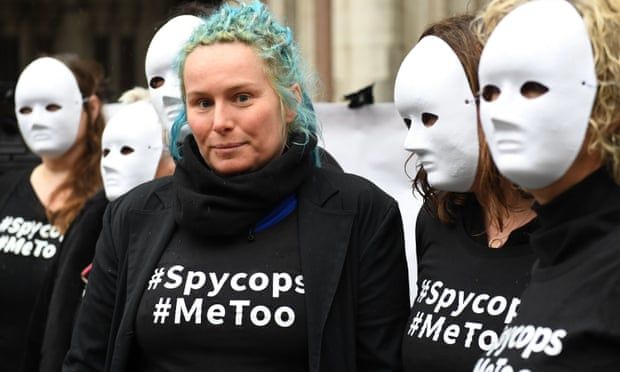 Police have been been severely criticised by judges who ruled that they grossly violated the human rights of a woman who was deceived into a long-term intimate relationship by an undercover officer.

The judges ruled overwhelmingly in favour of Kate Wilson, an environmental and social justice activist, who has pursued a decade-long campaign to uncover the truth.

In their landmark judgment on Thursday, the three judges in the investigatory powers tribunal (IPT) ruled that the Metropolitan police had violated Wilson’s human rights in five ways, including inflicting degrading treatment on her.

Mark Kennedy, an undercover officer who infiltrated leftwing groups for seven years, had a sexual relationship with Wilson lasting more than a year, without telling her that he was a police officer who had been sent to spy on her and the political groups she supported.

The judges ruled that senior officers in charge of Kennedy “either knew of the relationship, chose not to know of its existence, or were incompetent and negligent in not following up” clear and obvious signs.

In their 158-page ruling, they said the senior officers appeared to have a policy of “don’t ask, don’t tell” towards their spies who were deceiving women into sexual relationships. They said the managers probably had “a lack of interest” in protecting women’s human rights.

After the ruling, Wilson said: “The events in my case happened years ago. However, the failure of the police to protect women from sexual predators within their own ranks, and police attempts to criminalise protesters are both still very live issues today. The tribunal has gone some way towards recognising how deep the abuses run.”

Colin Boyd, the tribunal’s vice-president, and two other judges, said: “Were it not for [Wilson’s] tenacity and perseverance, often in the face of formidable difficulties, much of what this case has revealed would not have come to light.” She fought a large part of case herself as she could not afford lawyers.

The judges said she had uncovered a “formidable list” of human rights violations, adding that supervision of the covert operation was “fatally flawed”, could not be justified as necessary in a democratic society, and was characterised by “disturbing and lamentable failings at the most fundamental levels”.

Wilson is the first woman deceived by an undercover officer to take her case to the IPT, which examines allegations of abuses by the state. Other women have won compensation and apologies from the police after pursuing legal action in the civil courts.

Wilson had began a relationship with Kennedy in November 2003, shortly after he began his seven-year deployment spying on leftwing groups. Their relationship ended in February 2005.

She discovered his true identity in 2010 after he was unmasked by activists. He was one of 139 undercover police officers who have spied on more than 1,000 political groups since 1968.

Many deceived women into relationships while they were undercover. Kennedy had numerous relationships during his deployment, including one that lasted six years.

Police chiefs have claimed their undercover officers were not allowed to form sexual relationships with women they were spying on. The tribunal ruled that this claim was “materially undermined by the sheer frequency with which Kennedy (and other undercover officers ) did conduct sexual relationships without either questions being asked or action being taken by senior officers.

“We are driven to the conclusion that either senior officers were quite extraordinarily naïve, totally unquestioning, or chose to turn a blind eye to conduct which was, certainly in the case of Kennedy, useful to the operation.”

Wilson is to be awarded compensation at a hearing next year.

In a statement, the Metropolitan police and the National Police Chiefs’ Council said: “We accept and recognise the gravity of all of the breaches of Ms Wilson’s human rights as found by the tribunal, and the Met and NPCC unreservedly apologise to Ms Wilson for the damage caused.”
Add Comment