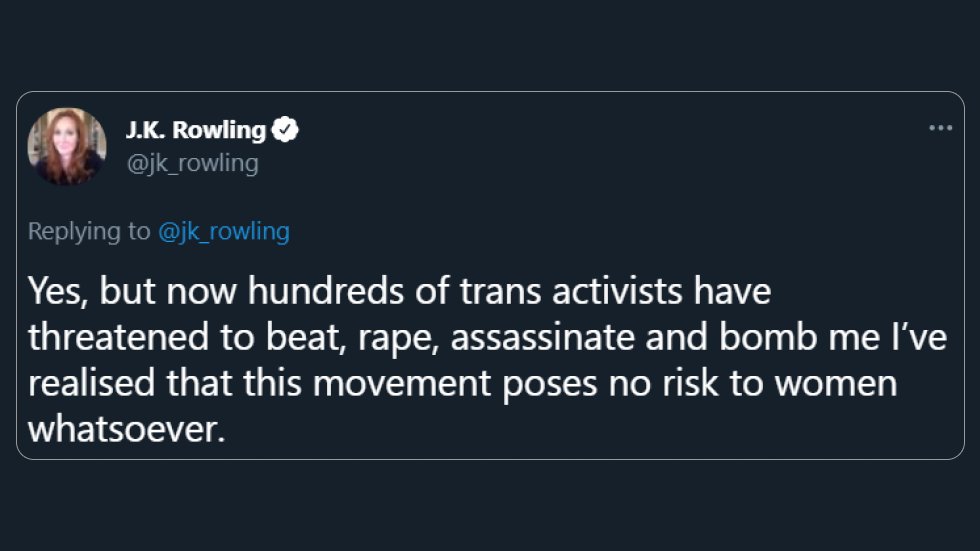 J.K. Rowling doubles down in trans toilet use debate as troll hopes she receives pipe bomb in the mail

Harry Potter author J. K. Rowling, who has previously been accused of being “transphobic” after her 2020 essay, has doubled down on her rejection of toilet sharing with trans people amid a flurry of abuse and threats.

In a series of tweets on Monday, Rowling hit back at her haters and doubled down on earlier comments about the rights of transgender individuals to use women’s toilets and changing rooms.

In an ironically worded tweet, she said that her views about allowing transgender people to use women’s facilities had been further strengthened by the torrent of abuse and threats she had received from people backing the trans movement.

Responding to one individual who had messaged, “I wish you a very nice pipebomb in the mailbox,” the author claimed her critics were getting desperate.

“To be fair, when you can’t get a woman sacked, arrested or dropped by her publisher, and cancelling her only made her book sales go up, there’s really only one place to go,” she wrote.

Last year, Rowling caused a furor after she published an essay sharing her opposition to Scottish plans to relax gender laws, a move effectively allowing people to change their birth gender more easily and quickly, and without a medical diagnosis. Rowling voiced her concerns about allowing transgender people in women’s spaces, including changing rooms and toilets, linking her perspective with her own experience of sexual assault.

She claimed the Scottish reform will “in effect mean that all a man needs to ‘become a woman’ is to say he’s one.”

The author faced a volley of abuse by transgender campaigners that was exacerbated when Rowling dared to suggest that a person who menstruates is, in fact, a woman. Scottish police even got involved, investigating a number of insults and threats, including rape, made towards the author.

While Scotland’s Gender Recognition Reform Bill was paused due to the pandemic, it was unlikely to have made a considerable difference to trans access to women’s facilities. The UK’s 2010 Equality Act protects trans people from being discriminated against when it comes to accessing single-sex spaces.