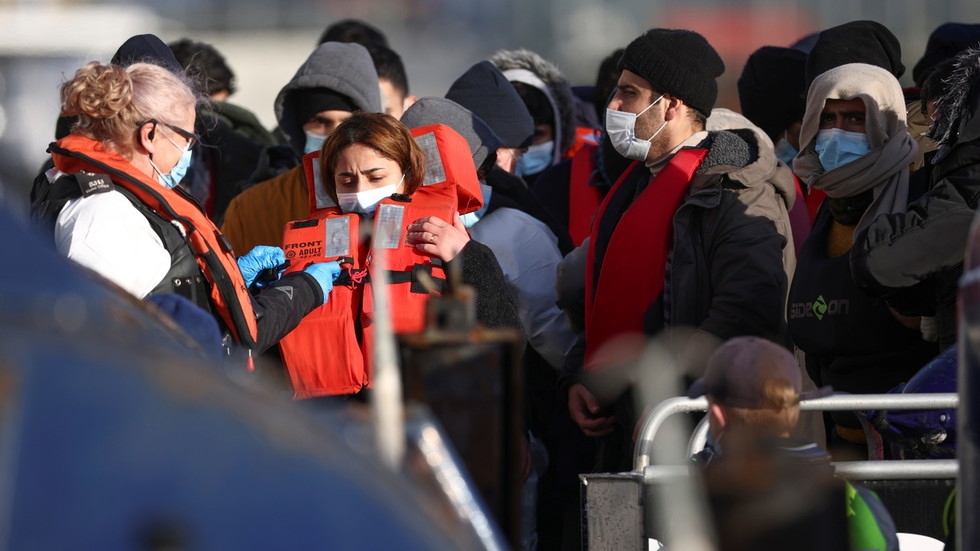 Reports that Britain was investigating processing asylum seekers in Albania show that Boris Johnson’s government has no idea what to do to solve the migrant crisis. But owning the problem would be a good place to start.

It’s another day and another farce – welcome to Britain 2021, and the world of Boris Johnson’s calamitous government. This week’s joker is Priti Patel, the home secretary who has overseen the largest invasion of our island nation since 1066 and the Battle of Hastings (For you swats, the Spanish Armada never made it onto our shores).

So far in 2021, more than 23,000 illegal migrants have made their way across the English Channel in small boats, rafts, and dinghies. In the first ten days of this month alone, 3,000 made the journey. Now sports retailer Decathlon has announced that it has stopped selling kayak canoes in Calais. You really couldn’t make it up.

For months now, the home secretary has been telling anyone who will listen that she will get a grip on the situation. Indeed, when there is a large influx of illegal migrants, you can count on Priti popping up with a strong speech, or an announcement that there is a no-nonsense plan to deal with this crazy situation. It’s a bit of red meat for the Tory faithful and it’s become like clockwork.

I mean, we’ve heard it all before, haven’t we? First the Royal Navy was getting involved, then we were going to force the French to play ball, then the Human Rights Act was going to be altered, and we’ve even heard about the use of jet skis in the Channel. It’s all become so predictable, and oh-so-cynical.

And now we have the latest one: the would-be asylum seekers making their way across the busiest shipping lane in the world are going to have their asylum applications processed in Albania. The Times newspaper led with the story, and then Justice Secretary, Dominic Raab refused to deny that the government was looking at this option on Times Radio.

The problem is that no one seemed to have bothered to inform the Albanians that they were to house tens of thousands of third-world migrants wanting to make their way into the sunny uplands of Britain. Within hours, the Albanian foreign minister, Olta Xhacka, described the story as “fake news.” Moreover, the Albanian prime minister, Edi Rama, said, “Albania will never be a country where very rich countries will set up camps for their refugees. Never.” Well that seems pretty conclusive to me.

It is clear for all to see that what happened yesterday was another cack-handed government PR stunt gone wrong. Patel and others had witnessed what had been going on in the English Channel this week and saw public anger growing. To placate the public, another hardline plan was briefed to The Times, but this time it has well and truly blown up in their faces – and they all look pretty stupid.

It also seems that no one has bothered to look at the costs involved. It is estimated that it would cost £100,000 to send a would-be illegal migrant to Albania have his/her asylum application processed. By the end of this year, that would likely have amounted to £2.5 billion, and with the way things are going, it could be up to £10 billion next year, and every year thereafter.

And why send the would-be asylum seekers all the way to Albania, or even Rwanda, which has also been suggested? The UK is an island that is surrounded by lots of other smaller islands. Why not house them on one of the many uninhabited Scottish islands while their applications are processed? I am sure it will be a lot cheaper – and besides, virtue-signalling Nicola Sturgeon keeps telling people about how refugees are so welcome in Scotland. Why not give her what she wants?

In my opinion, the whole idea of allowing migrants to get to the UK and then flying them off to foreign shores for their applications to be processed is like putting a plaster over a gaping wound. Moreover, is it really fair for the UK to be passing off its migrant problems on to other countries, especially when they have been self-inflicted?

Instead, the would-be asylum seekers should be encouraged not to make the journey in the first place. Also, it should be made clear that if you don’t have any official papers – and most don’t, because they’ve dumped their passports and identity cards in the sea – then you will be towed back into French waters. In addition, the government needs to look at UK-based pro-refugee NGOs, which the French claim are preventing them from clearing the migrant camps near the coast.

What is happening in the English Channel at the moment is the result of long-term UK government policy, which goes all the way back to the days of Tony Blair. Reckless wars in the Middle East have created a tinder box in that region, and post-war guilt has resulted in the UK opening its arms to all and sundry. That’s why there are four-star hotels for illegal migrants and that’s why free healthcare is offered. There are just too many pull factors.

But at some point, this self-loathing liberal guilt has to be overcome and it must be made clear that the roads in London are not paved with gold. I am not opposed to removing would-be asylum seekers while they have their applications processed, but I am not sure that sending them to Albania is the answer, especially when there are cheaper options on our own doorstep.