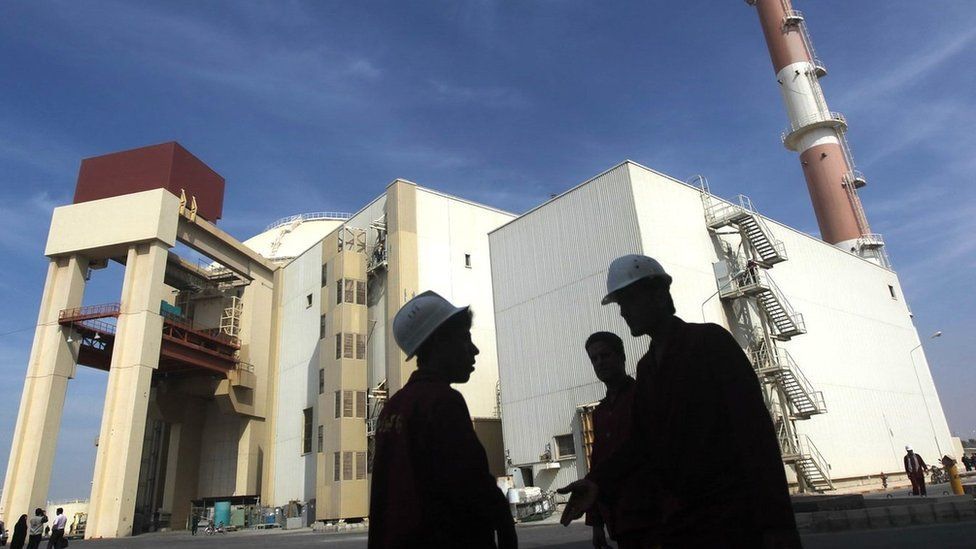 The UK has urged Iran to back a deal that would revive the international agreement curbing the country's nuclear activities, at a meeting in London.

Under the original 2015 deal, Iran said it would curb its nuclear ambitions in return for other countries lifting economic sanctions.

The agreement collapsed when the US pulled out in 2018, but President Joe Biden has said it could rejoin.

Talks are set to resume in Vienna on 29 November after a four-month hiatus.

Ahead of those talks, Iran's deputy foreign minister and lead negotiator, Ali Bagheri Kani, came to the UK Foreign Office to set out his country's demands.

At the meeting, Foreign Office Minister James Cleverly told his counterpart that Iran should take the opportunity of the new talks to conclude a deal that he said was already on table.

The Iranians said merely the nuclear deal was discussed, without noting any specifics.

They want the focus of the Vienna negotiations to be on lifting sanctions, and getting guarantees from the United States that it will not pull out of the deal again.

But Western countries want the talks to pick up where they left off in June, including on how to tackle Iran's growing stockpile of enriched uranium.

The potential deal being discussed in June centred on lifting sanctions against Iran, while also curbing its nuclear programme.

What was still to be agreed was which sanctions, which nuclear activities, in what order and when.

Today's meetings at the Foreign Office were a chance for Iran to set out its stall ahead of crucial talks later this month.

There is not a huge upswelling of optimism that these new talks in Vienna will succeed.

Iran has a new hardline government since the election of new president Ebrahim Raisi.

Joe Biden is under political pressure in the United States not to concede too much.

And the more time passes, the value of resuming the nuclear deal diminishes - because it contains many time limited provisions.

Iran has always insisted its nuclear programme is peaceful. But there are suspicions, particularly in Israel, that the country wants to develop a nuclear bomb.

Israel opposes the deal, and earlier it warned it was "speeding up its plans" to deal with what it called "Iran's nuclear threat".

Hostilities between the two countries have escalated recently, with Iran blaming Israel for the assassination of its top nuclear scientist last year and an attack on one of its uranium enrichment plants in April.

The 43-year-old mother-of-one from London has been held in Iran for five years on spying charges, which she has always denied.

Her husband, Richard Ratcliffe, has been holding a hunger strike outside the Foreign Office for over a fortnight to put pressure on the government to do more to secure her release.

The Foreign Office says Mr Cleverly met Mr Ratcliffe on Thursday "to reaffirm our commitment" to reuniting Mrs Zaghari-Ratcliffe with her family.

After the meeting, Mr Ratcliffe told reporters the meeting had been "depressing", and he didn't have "any hopes" of a breakthrough.

"I don't feel they moved forwards today," he added.