Analysis: PPI, the indicator of rises before they reach the consumer, shows higher price rises to come

Are we there yet? Each month the same question is asked about the UK’s inflation rate. Is there any sign of the cost of living crisis abating? And each month the answer is in the negative. The current upward trend has further to go.

May’s increase in the consumer prices index – the government’s preferred measure of inflation – was modest by recent standards but even so the rise from 9% to 9.1% was a new 40-year-high.

More worrying was the evidence provided by the producer price index that there are more price rises to come.

The PPI is a measure of what is happening at an industry level to the costs paid by companies for their fuel and raw materials, and the costs they are charging to their customers. It is an indicator of price pressures before they reach consumers. 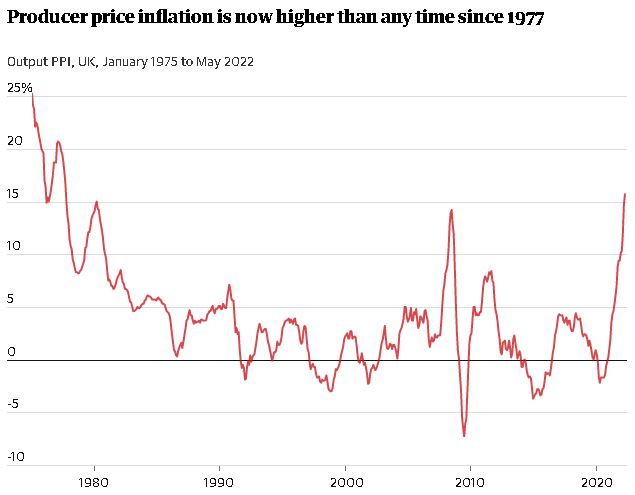 Here the message is grim. Fuel and raw material prices were up by more than 22% year on year – the fastest rate since modern records began in 1985. The price of goods leaving factories are increasing at an annual rate of 15.7%, up from 14.7% in April. The Office for National Statistics said that was the steepest rise in 45 years.

Of course, not all of the jump in producer prices will necessarily be passed on to consumers, because retailers may choose to accept lower profit margins rather than risk a loss of business.

That said, the PPI suggests upward pressure on the CPI for some months to come. With a leap of around 40% in the energy price cap forecast to come into force in October, the likelihood is that the annual inflation rate will be nudging 11% later this year. 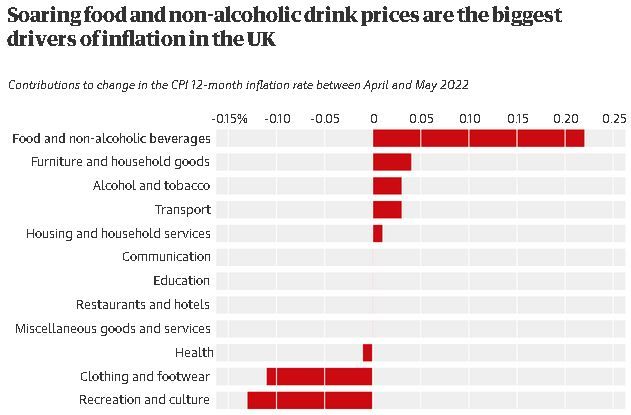 If there was one crumb of comfort from the latest CPI it was the slight fall in core inflation, a measure of the cost of living that excludes food, fuel, alcoholic drinks and tobacco. This indicator – closely watched by the Bank of England – fell back slightly last month, from 6.2% to 5.9%.

Given that two of the biggest contributors to inflation over the past 12 months have been food and energy that slight decrease is perhaps unsurprising and as far as consumers are concerned the cost of living is going up by 9.1% not 5.9%. Poorer consumers, who spend more of their income on food and fuel, may already be experiencing double-digit inflation.