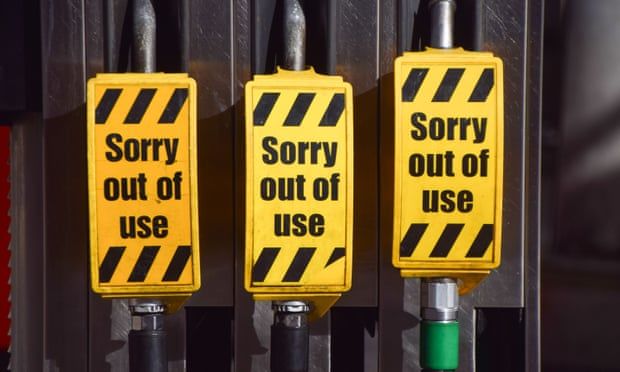 ‘I wanted to cry’: three key workers on being hit by the UK fuel crisis

A carer, a GP and a social worker speak about the impact the crisis is having on them and their work

With people in places across the UK still unable to fill up their tanks as petrol stations have run dry and British fuel prices have hit an eight-year high, three key workers – a carer, a GP and a social worker – spoke about the impact the situation was having on them and their work.

Rosie, a private carer from rural Norfolk, has already had to stop seeing some clients she visits owing to her nearly empty tank.

“I have been unable to get fuel, I have about a quarter of a tank left,” she said. “I’ve had to prioritise clients to whom I live closest, and those most vulnerable. Those with family members nearby, I’ve told them I’m probably not going to be able to see them. I think I can get through to Wednesday, then I’m completely stuck.”

She said the fuel shortage was potentially worse for those living in rural areas where there is no public transport worth mentioning.

“My nearest petrol station is miles away, so I have to use fuel to go hunting for more fuel. This situation has a big impact on people here. Care agencies are not prepared to cater for some of the remote areas I service.”

The impact on some of the people she cares for is enormous, she said. “I’m concerned how the families of people I can’t get to will manage. I have one particular family where the lady has just come out of hospital a week ago. If I don’t come, her only carer is her 79-year-old husband. They thankfully live only five miles away, so they are top of my list. But another family is 35 miles away, and I can’t do them at the moment, as much as I don’t like letting them down.

“Not being able to get fuel is having a huge knock-on effect on people. Family members might have to move in with vulnerable relatives, and I may have to go and stay with clients of mine, although I do hope this will all resolve itself when people calm down.”

Sean Nolan, a GP from Somerset, first tried to get fuel on Friday before travelling to London for a cycling event at the weekend. “I was still looking at 1am on Saturday but places were either closed or empty,” he said. 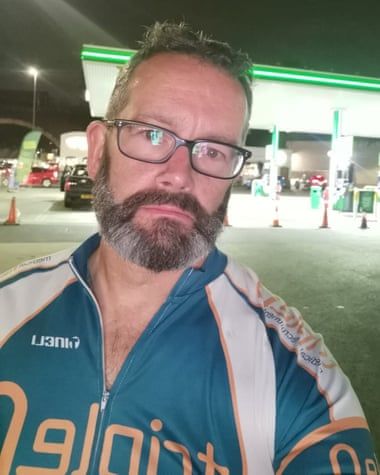 Dr Sean Nolan outside a petrol station unable to get any fuel.

When the event finished on Sunday afternoon, although Nolan’s car fuel gauge indicated the tank was empty, he estimated he still had enough for about 10 miles of travel and agreed to take a friend home who had lost her lift because of the fuel crisis. Nolan spent an hour in a petrol station queue where drivers were “acting very aggressively”, but he couldn’t get any fuel.

He eventually parked his car and went into a bus depot to ask for advice. “Someone kindly gave me a large 2-litre handgel container to try and get some fuel but the stations were empty,” he said.

Shortly afterwards he met three men who were leaving their church after evening service, who said they had fuel in their van. “The next two hours were filled with gathering materials to siphon the fuel, and watching a YouTube video on how to work around the vehicle’s safety locks. “I took the tubing from my bike pump which needed a seal, so I used the NHS gloves from my car and the face masks I had available.

“The men who helped me were amazing and gave up a huge part of their evening. We all filled our mouths with diesel multiple times to siphon it. How many people are willing to drink diesel and get dirty to help someone they don’t know?”

After finally getting the 2 litres of fuel into the tank, Nolan arrived at his friend’s house in Twickenham at about 10.30pm, where he is staying until he can drive back home to Somerset.

“I won’t be able to get home tomorrow and I’ve already told my surgery that I might not even be back on Wednesday,” he said.

‘I wanted to cry’

“I genuinely thought the government would have done something by today,” said Emma in Nottinghamshire. “I live in quite a rural area and the nearest petrol station is about 15 miles away.”

Emma, a social worker in her 40s, has had to cancel her home visits, where she checks on children and ensures their safety. “I’ve alerted my manager who has allocated staff to help cover and I pray nothing happens in the meantime,” she said. Emma tried her local Tesco petrol station on Monday at about 10am after hearing that they had a fuel delivery an hour before. “When I got there it was closed – I was gutted,” she said.

“While I was standing there in disbelief, two cars arrived, one belonged to a district community nurse in uniform between calls, and the other was a primary school teacher. We just shook our heads and asked: ‘What do we do now?’ before jumping back into our cars to carry on the search. To be honest, I wanted to cry.”

Emma managed to make her way home and is going to try one more time tomorrow morning. “Some of us who are classed as critical workers have jobs to go to and I feel like the children I visit are my responsibility. My hands are tied and I just can’t physically get there to see them.”