Hundreds of Mancunians – many of them from charities, campaign groups and religious organisations – gathered in the city’s St Peter’s Square on Sunday to protest against the government’s plan to deport refugees to Rwanda.

With just two days to go before the first refugees are due to board flights to the central African country, the protest was one of a number taking place across the UK, and was happening amid further legal challenges after the high court ruled last week that the flights can go ahead.

Speakers included Maddy Summerfield of Care4Calais, who described the deportation scheme as “obscene” and told the crowd: “There are 6,500 people in Manchester’s asylum system and we’re here yet again to call for justice for them.”

Other speakers included Martin Empson of the Campaign Against Climate Change, who said: “Many in the global south are facing the consequences of the climate disaster on a daily basis. Simultaneously, they’re met with racism and state oppression at every turn. As a nation, we have to do something.”

He added: “Fighting for a sustainable future means fighting for one that is free from oppression.”

Dr Rhetta Moran, from human rights group Rapar, called for people to “stand shoulder to shoulder” and “keep finding ways to build solidarity”. Her comment that “this can’t carry on in our name” was met with rapturous cheers.

Moran and other speakers referred to Saturday’s events in Peckham, south London, where protesters blocked a van transporting a man who had been arrested for immigration offences.

Karen Reissmann of Unison echoed comments attributed to Prince Charles regarding the Rwanda plan when she said: “From London to Manchester and much further afield, people are appalled by what is happening.” 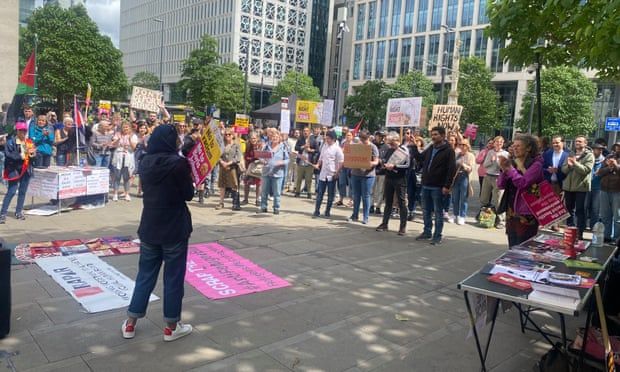 Speakers voice their opposition to the government’s refugee plan before the march in Manchester.

The Rev Laurie Windle of the Church of England said she had come along to speak for her congregation and added: “Many are appalled by what they see as an ‘ungodly’ asylum system. This piece of legislation goes against the essence of God.”

Meanwhile, members of Manchester’s Syrian community spoke of their own experiences, and said their hearts were “broken by this new and racist policy”.

Other groups present included Stand Up to Racism, Amnesty UK, Safety4Sisters, the People’s Assembly, and the Status Now network plus voices from the Manchester’s Iranian, Iraqi and west African communities.

As they prepared to begin the march, chants rang out of “Say it loud, say it clear, refugees are welcome here.”

Just before they left the square, artist Will Belshah took the mic and told the story of his grandfather arriving in Britain from Baghdad, adding that the deportation plan had left him “too enraged to moderate his language or calm down”.

He concluded: “Anger and civil disobedience are sometimes the only way to change things.”