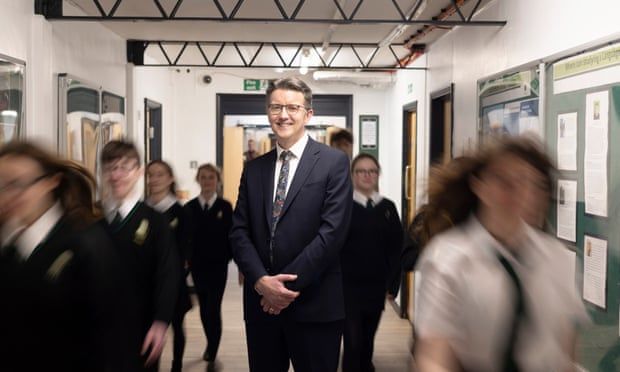 How an Oxfordshire school created its own enriching baccalaureate

Wood Green school is pioneering a new approach that aims to reward pupils for debating skills, teamwork and community service as well as academic success

At Wood Green school in Witney, Oxfordshire, a group of year 7 pupils are trying to convince classmates that scientists have taught spinach to send emails. Next door another class is being challenged to speak for 40 seconds, along the lines of Radio 4’s Just a Minute, on the subject “what is under the bed?”

Their peers might be doing a public speaking class, a session focusing on their own health and wellbeing, or taking part in community service or a Duke of Edinburgh award, which all pupils are expected to complete.

The lessons in how to spot fake news, in oracy, debating, teamwork and emotional intelligence aren’t attempts to undermine the Gove-ite traditional curriculum. Pupils at Wood Green do all the expected academic subjects and take public exams such as GCSEs and A-levels.

Many schools offer these enrichment opportunities. But at Wood Green the school’s leadership team is pioneering the idea of assessing pupils’ achievements in all these areas and awarding its own “baccalaureate” as part of a campaign launched this month aiming to radically change the way secondary education is organised in England.

Baccalaureate awards aren’t new. Wales already has one and the international baccalaureate is one of the most successful global qualifications, celebrated for its promise to develop “a broad range of human capacities” and requiring pupils to complete projects in creativity, activity and public service as well as achieving academic success.

Wood Green’s headteacher, Rob Shadbolt, realised he wanted something similar to this for his school years ago after a meeting with local employers and the then local MP and prime minister, David Cameron.

“I asked how the education policy of the government created young people with the skills that these employers wanted. He [Cameron] replied that what employers needed was employees with good maths and English,” said Shadbolt. “Although no one disagreed with the importance of numeracy and literacy, the employers in the room said they prioritised young people who could communicate, work well with others and by themselves, and who showed initiative.

“Turning out grades 4 or 5 in a maths or English GCSE, although important, isn’t enough. Broader opportunities are built into education in private schools. Why shouldn’t every child have that entitlement? This is about social justice as well.”

Shadbolt’s thinking prompted him to join the National Baccalaureate Trust, an offshoot of the Headteachers’ Roundtable thinktank, which came together on Twitter 10 years ago out of frustration at Michael Gove’s “English baccalaureate” idea.

Critics argue that Gove’s Ebacc, which judges schools on how many pupils achieve a good pass in a small number of academic subjects, is nothing like the real thing, and Tom Sherrington, a former headteacher and founder member of the HTRT, has been working with other heads since then to devise a qualification more aligned to the IB than the Gove model.

The national baccalaureate would be a final qualification at 18 and include pupils’ results in GCSEs, A-levels and vocational qualifications, as well as other achievements in the arts, sport, project work and civic activity. Crucially, campaigners believe, this would help to minimise the status divide between academic and technical routes by unifying them under one award.

“Young people’s educational careers are too defined in terms of a collection of exam results, with too little regard for technical education, creative learning, and personal development,” says Sherrington. “So many of those judged to be at the lower end of the attainment range are denied the opportunity to leave school with a fair record of their successes and achievements, however hard they work. We believe a successful education encompasses so much more than this.”

The proposal, which has been subject to a lengthy consultation with professionals, was launched last week on the website Rethinking Assessment, almost 20 years after a similar idea for an all-encompassing diploma at 18, crafted by the former Ofsted chief inspector Sir Mike Tomlinson, was rejected by the then prime minister Tony Blair.

But after the saga of exam cancellations, failed algorithms and controversial teacher assessments during the pandemic, and a growing unease about the extent to which exams dominate the education system, some campaigners are keen to go faster than a new qualification that still includes GCSEs and A-levels.

The Tory MP and chair of the education select committee, Robert Halfon, has proposed abolishing GCSEs altogether and replacing them with a baccalaureate qualification at 18. Peter Hyman, the former Downing Street adviser and now co-director of the Big Education academy trust, has called for a final pupil “transcript”, which would give credits for a range of projects and skills over a pupil’s entire school life.

The Conservative One Nation group also supports the baccalaureate idea and believes it would contribute to the government’s levelling up agenda. The Conservative MP Flick Drummond said she didn’t believe the existing curriculum was fit for purpose.

“We need to have a 14-18 curriculum with one set of exams/assessment at the end, at 18, which would include both academic and vocational qualifications, including apprenticeships, and give young people a wide-ranging portfolio to present to the next stage, whether that is university or work,” she said.

“I am particularly concerned that we are putting so much emphasis on passing exams that are not engaging young people. They should be relevant and useful. By waiting until 18 to assess young people, they will have the maturity to understand the relevance of what they are doing, and we should make sure that vocational qualifications are seen as on a par with academic ones.”

Sherrington thinks the time may not yet be right for the outright abolition of GCSEs. “A baccalaureate is a really good way to talk about exams because you don’t have to talk in binary terms about having them or not. You can include them in a wider award that assesses pupils in other ways. And have far fewer exams that aren’t as high stakes.”

At Wood Green school, Shadbolt agrees that a first stage would be to put a baccalaureate framework around what schools are already doing. “We are crediting all learning and personal development in our school, but we would welcome external accreditation that valued a wider range of attributes, and unified academic and vocational qualifications. A government commitment to this would be such a transformational step forward for schools.”
Add Comment