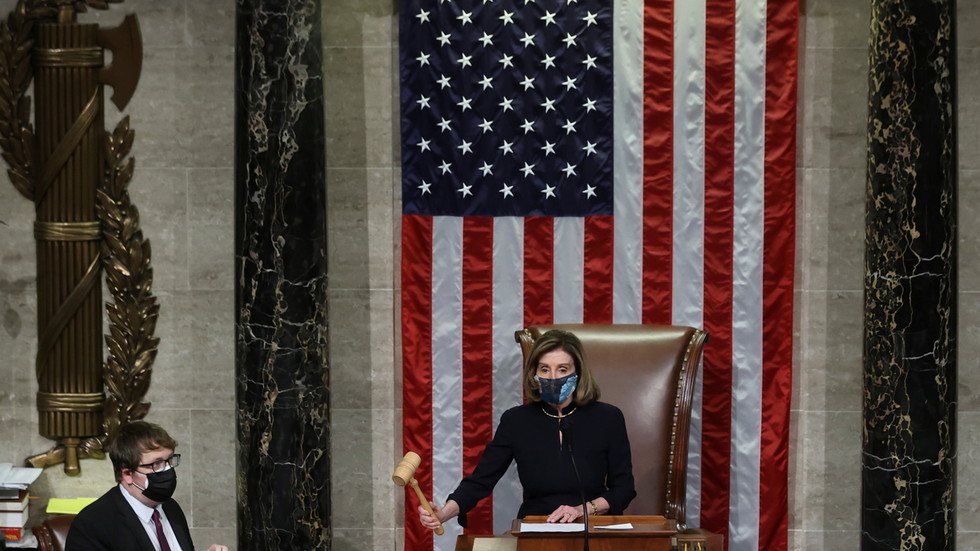 House votes to impeach Trump for ‘insurrection,’ unclear when the case will go to Senate

Arguing he incited an “armed rebellion” (armed??? why they are using fake claims against all what the world saw in live videos?) against the US, the Democrat-dominated House has voted to impeach President Donald Trump again. But with his term expiring in a week, it is unclear when the trial will proceed.

After several hours of debate on Wednesday, the House of Representatives voted to formally impeach the president over the January 6 unrest at the US Capitol, when a group of Trump supporters broke into the building and interrupted the joint session of Congress meeting to certify Democrat Joe Biden as the winner of the 2020 US presidential election.

It wasn’t immediately clear whether the Senate will reconvene on an emergency schedule to conduct the trial, however. Reports in mainstream US media were conflicted, with some outlets citing anonymous sources to claim that Senate Majority Leader Mitch McConnell (R-Kentucky) was eager to do so and help the Democrats get rid of Trump. However, McConnell’s spokesman said on Wednesday he would “not consent” to doing so before January 19, putting the trial into Biden’s term as president.

House Majority Whip James Clyburn (D-South Carolina) told CNN on Sunday that the Democrats might even give Biden a hundred days “to get his agenda off and running” before they send the articles to the Senate.

The delays and calculations are at odds with rhetoric coming from House Speaker Nancy Pelosi (D-California) and her impeachment managers, who called Trump a danger to the country and urged his immediate removal.

Democrats have even argued that Trump and anyone supporting him ought to be barred from holding any office under the 14th Amendment, passed after the Civil War to punish leaders of the Confederacy.

“We know that we face the enemies of the Constitution,” Pelosi said on the House floor on Wednesday. “We know we experienced the insurrection that violated the sanctity of the people's capital – an attempt to overturn the duly recorded will of the American people. And we know that the president of the United States incited this insurrection, this armed rebellion against our common country. He must go.”

While much was made of a handful of Republicans – led by Rep. Liz Cheney (R-Wyoming) who said they would back impeachment, much of the party stood by the president and spoke to that effect.

“If we impeached every politician who gave a fiery speech to a crowd of partisans, this capital would be deserted,” said Rep. Tom McClintock (R-California). “That's what the president did. That is all he did. He specifically told the crowd to protest peacefully and patriotically, and the vast majority of them did. But every movement has a lunatic fringe. Suppressing free speech is not the answer. Holding rioters accountable for their actions is the answer.”

“It’s always been about getting the president no matter what,” said Rep. Jim Jordan. “It's an obsession that has now broadened. It's not just about impeachment anymore. It's about canceling the president and anyone that disagrees with them,” he added.

“We’ve been here before. We’ve done this before. This has failed before. We fractured our nation using the same process before,” said Rep. Jeff Van Drew (R-New Jersey), who switched parties after Trump’s first impeachment in 2019, which he voted to oppose.

Trump is only the third US president to ever be impeached, after Andrew Johnson in 1868 and Bill Clinton in 1998, and the only one to be impeached twice. Democrats impeached him in December 2019 for “abuse of power” and “obstruction of Congress,” citing a phone call with the president of Ukraine. No Republicans voted in favor.

Pelosi then waited six weeks to send the articles to the Senate, which acquitted Trump on both counts in another party-line vote. Of all the Republicans, only Sen. Mitt Romney (R-Utah) voted to convict, and only on one count.

Democrats currently hold 222 seats in the House, to 211 Republicans, with both parties having 50 senators. A two-thirds vote in the Senate is required to convict a president on impeachment articles, a bar that has – so far – never been met in US history.