Increased levy for plastic bags took effect on Saturday, with shoppers also unable to get free carriers for loose produce and meats.

Some Hongkongers have questioned the effectiveness of doubling the government’s levy on plastic bags to HK$1 (13 US cents) after a few were caught unaware of the increased charges from Saturday.

Signs were placed in the cashiers’ areas of stores and supermarkets to remind shoppers they would have to pay more for plastic bags and could no longer receive them for free when buying prepacked produce or meat, as well as at the self-checkout.

The levy increase was the first since the original scheme was introduced in 2009. The price rise was among 24 recommendations from the Council for Sustainable Development following a public consultation in 2021.

Among those residents who said they were unaware of the new regulations was homemaker Catherine Xu, 52, who was shopping at upscale supermarket chain City'super in Causeway Bay.

“I had no idea about the charge. I don’t feel its effect either,” she said. “I tried to bring my own bag when the scheme started but I’ve gradually given up and become desensitised to it.”

At a Wellcome supermarket branch in the bustling retail district, most customers were seen bringing their own shopping trolleys and reusable bags. But others still asked for a free plastic carrier to hold loose items such as bananas, apples and pears.

Some shoppers said they felt the HK$1 levy was meaningless and would not deter people from using plastic bags.

Social worker Louis Leung said he considered the levy to be part of his regular expenditures. Living alone in a 300-sq-ft flat, the 39-year-old explained that he was not in the habit of recycling.

“I use those shopping bags in place of garbage bags at home,” he said. “I won’t be deterred until the levy is increased to HK$10. Now, HK$1 is nothing. It doesn’t reflect the current price levels.”

Engineer Jan So, 44, said he had not been aware of the levy increase and had made an effort starting several years ago to bring his own bags.

“I haven’t used any plastic bags since the levy was first introduced. I bring my own tote bag for shopping,” he said, standing beside his 10-year-old daughter, Alisa, who was carrying two boxes of surgical masks.

Online store owner Dorothy Wong, 40, said she felt the levy would not make a difference and taxing people was not the right way for the government to promote protecting the environment.

“I bring my own bags, and I bring my own boxes most of the time when buying takeaways. But I do it because I feel a responsibility to do so,” she said.

“Hong Kong is a rather affluent society. Monetary punishment doesn’t work. But if increasing the charge can encourage people to start buying unpackaged or loose food products, it is not a bad thing.”

Under the revised rules, free plastic bags can no longer be given out for chilled and frozen foodstuff, as well as items in wrapped or sealed packaging. 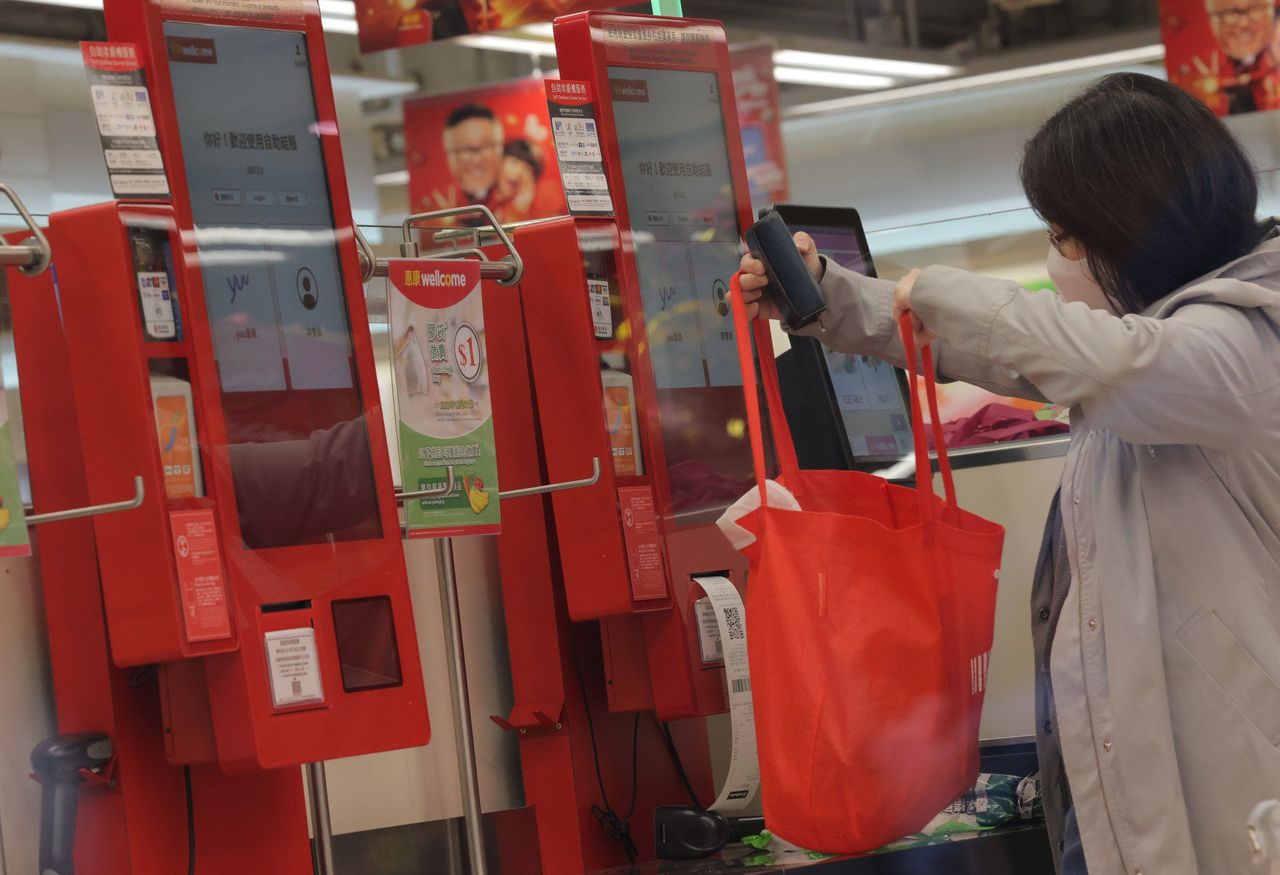 A shopper brings a reusable bag to a Wellcome store in Causeway Bay.
Unpackaged items, such as meat and fish at food markets, and takeaway meals are still exempted for hygiene and food safety reasons.

Businesses have one month to comply with the new regulations, while authorities have said they would strengthen promotion work during the first three months of enforcing the policy.

Environmental authorities have also called on shoppers to follow a general principle of “one purchase, one bag” unless multiple ones were required to avoid damaging items.

Representatives for Hong Kong’s supermarket chains, including Wellcome, ParknShop and Yata, said employees had already received guidelines and training on the new levy.

“There are in-store posters at all ParknShop and Watsons Hong Kong branches to remind customers to bring their own bags while shopping,” ParknShop added.

Wellcome said it had rolled several redemption schemes to entice customers to bring their own bags, while Yata pledged that the supermarket chain would look at alternatives that could replace plastic carriers.

Furniture outlet Ikea, meanwhile, said it had stopped providing single-use plastic bags since 2019. The company added that it would give customers a 10 per cent discount if they brought their own containers for takeaways at its bistros and restaurants.