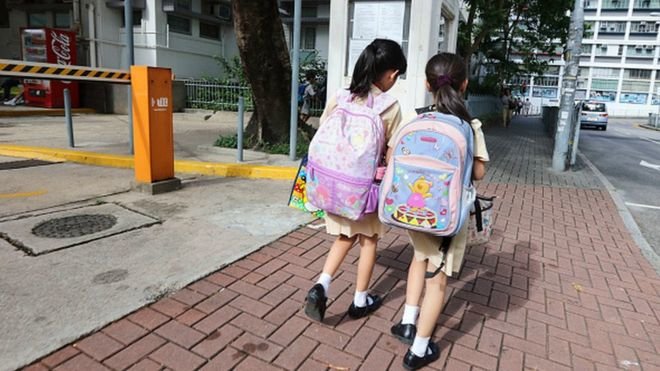 A Hong Kong teacher's licence has been removed after being accused of promoting the territory's independence in the classroom.

Hong Kong's leader Carrie Lam said it was important to weed out "bad apples" from the education system.

Officials in Beijing believe schools have been helping to foment opposition to China's communist party.

Rights group Amnesty International said the sacking sent an ominous message to teachers in Hong Kong about the discussion of politics in schools.

But Ms Lam insisted that the teacher's removal was the result of a "thorough" probe.

"This is a very serious case," she added. "We do not allow independence and other unlawful ideas to creep onto campuses."

Activists and observers fear that freedom of expression in public life and academia is on the decline in Hong Kong following the introduction of a controversial new law.

In July books by pro-democracy figures were removed from public libraries and a leading university fired law professor Benny Tai over a criminal conviction for his role in the 2014 pro-democracy protests.

This latest development marks the first time that the territory's education bureau has removed a teacher's licence due to classroom content.

Under the controversial national security law, passed in June, it is illegal to advocate for Hong Kong's independence. The teacher's misconduct happened before the law was in force, but the education bureau said it was still in violation of the Basic Law - the territory's mini-constitution.

According to local media, concern was raised after the teacher showed students a TV documentary featuring pro-independence activist Andy Chan Ho-tin. Pupils were then asked to answer four questions from a worksheet about freedom of speech and proposals for Hong Kong's independence.

A father of one child in the teacher's class told RTHK radio that he had read the worksheet and found nothing advocating for independence.

"If our kids in Hong Kong are not equipped with critical-thinking skills, I'm afraid there will be more education problems in the future," he said.

Another father, however, told RTHK that he believes teachers should be disqualified if they can't teach their students using proper materials.

The Alliance Primary School, where the teacher was based, has said in a statement that it would do its best to ensure the campus remains "politically neutral" and provide students with appropriate education. 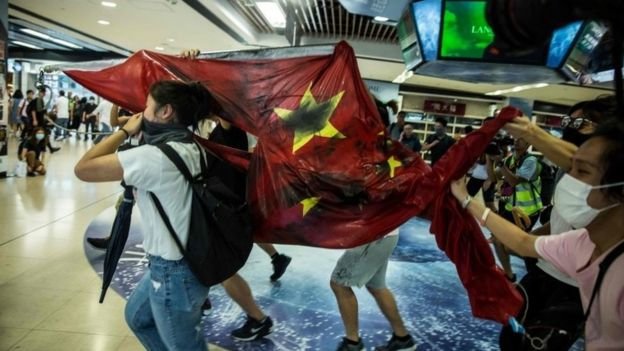 In 2019, there were months of anti-Beijing protests

Mr Leung has applied for a judicial review to force the education bureau to release the names of teachers found guilty of misconduct.

Hong Kong's new national security law has been widely criticised since it was imposed by Beijing in June after months of huge pro-democracy protests last year.

The law criminalises secession, subversion, and collusion with foreign forces.

Opponents, including the UN, say it breaches international law and erodes basic freedoms in the former British colony. But Beijing has said the legislation is needed to tackle unrest and instability.