Hong Kong’s security minister has thrown support behind a formal police dismissal of a complaint launched by a reporter, who accused an officer of “unnecessary use of authority” by shooting a sponge grenade at his back when he was covering a clash during the anti-government protests in 2019.

Secretary for Security Chris Tang Ping-keung on Monday said he respected the findings of the force’s internal Complaints Against Police Office (Capo), which told Raymond Cheng, 27, in a reply that there was insufficient evidence to substantiate his claim filed a month after the incident on November 16, 2019. The unit said the act of the officer in question was “not unreasonable”.

Cheng, a former Commercial Radio reporter, said on Sunday night he would file an application to review the Capo findings. 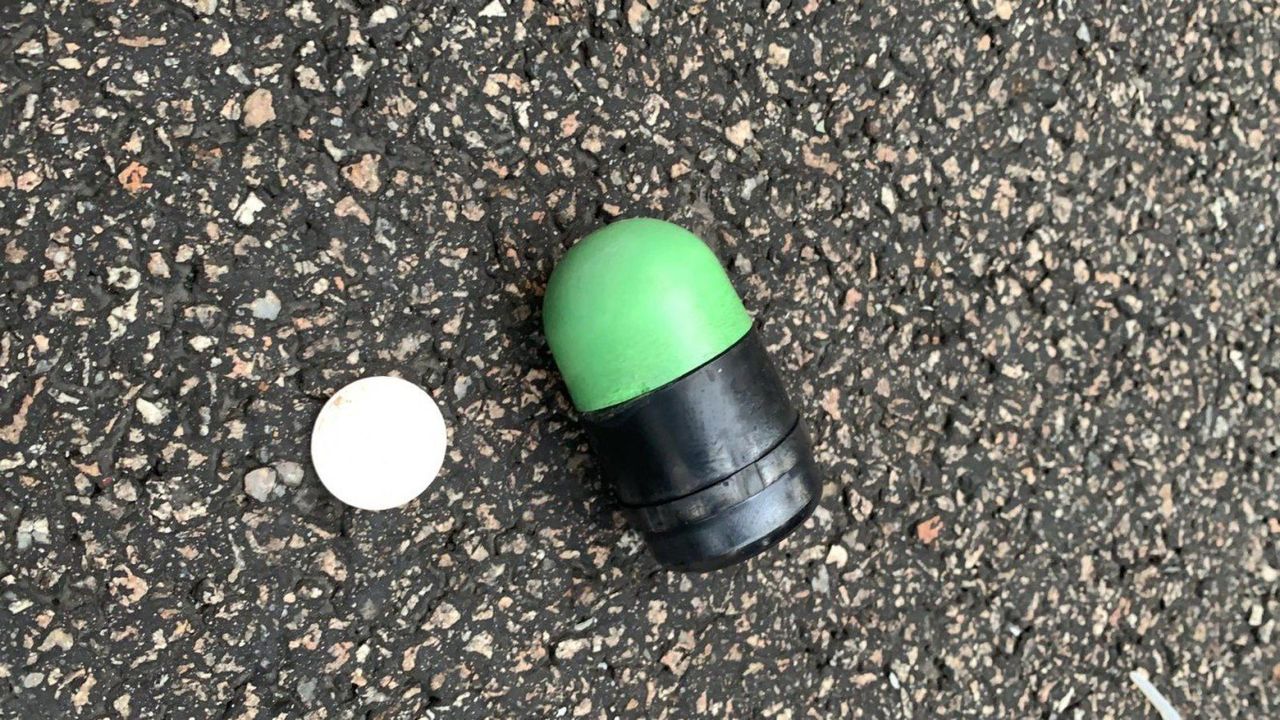 A sponge grenade used by police in the 2019 unrest.

Tang on Monday said he had already “reprimanded” colleagues involved when serving as police chief during the protests he now regarded as a “colour revolution”.

“There could be room for improvement in public perception of the law enforcement work as I’ve said,” he told a radio show. “Three years have gone, we now must respect [Capo’s] conclusion that the complaint was not substantiated.”

According to an earlier account from Cheng, riot officers had shoved other journalists wearing reflective vests and holding cameras near Langham Place mall in Mong Kok at around 1am that morning, prompting him to take out his mobile phone to film the act.

He said police tried to stop him from taking the video, but he resisted and read aloud an officer’s operational call sign – ID numbers worn by frontline police for the public to identify them – for the record.

Another officer then pointed at Cheng, declaring “arrest him”, according to the reporter. When Cheng turned to leave, he felt something strike his backpack and heard a gunshot.

He did not sustain any injury in the incident, but the non-lethal round was suspected to have left a hole in his backpack.

A police source confirmed to the Post in 2019 a sponge-tipped round was fired, which hit the backpack of the reporter, accusing him of fleeing an arrest.

In the Capo reply, the force stated the site was chaotic at the time and officers had requested Cheng and two others to leave to ensure their safety. The warning, however, was ignored by Cheng, it said.

The unit said Cheng had touched an officer’s hand before “turning away to run”, with the policeman giving chase and a sponge grenade was then fired at Cheng. It was not specified if the shot was from the officer in question. The Capo held that the act was “not unreasonable.”

“As there was not enough evidence to support the allegation [of unnecessary use of authority], the allegation is classified as ‘unsubstantiated,’” the reply read, adding that the classification was endorsed by the police watchdog, the Independent Police Complaints Council.

The Capo also dismissed two other allegations, in which Cheng accused officers of “misconduct” by pushing away another reporter’s mobile phone twice and pulling down his gas mask.

The Capo said the concerned officers had denied the allegations, and there were no video clips showing the alleged actions.

Cheng, now a newspaper reporter, said the investigation results were regretful, adding they were not in line with the facts. He added it was the officer who made physical contact with him and not vice versa.

Cheng said when he realised he was hit by a round, he stopped and turned to officers to identify himself, and was not pursued after that.

“I will file an application to review Capo’s result,” Cheng said on Sunday.

Commercial Radio also said on the same day that the police conclusion was inconsistent with the facts, urging the force to review the investigation and give an explanation.

It added that security minister Tang, as the then police chief, had mentioned the incident in two interviews with the station, saying he would conduct disciplinary reviews. The station said the remarks by Tang, who also agreed that the reporter was performing his duties, had indicated wrongdoings.

A force spokesman said Capo had completed the investigation in accordance with established procedures in a fair and impartial manner, and it would not comment on individual cases.