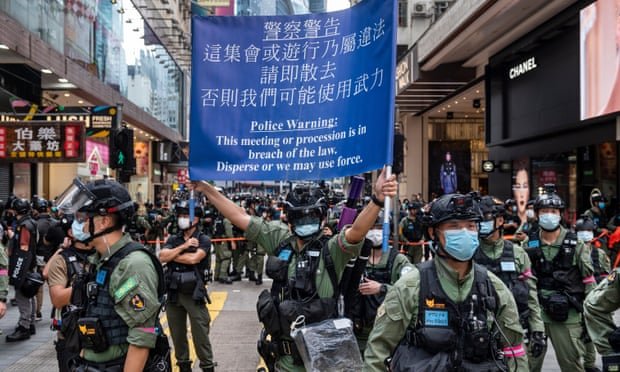 Hong Kong has accused Germany of “harbouring criminals” after it granted asylum to a student who fled charges over last year’s pro-democracy protest.

Matthew Cheung Kin-chung, Hong Kong’s chief secretary for administration, warned against foreign interference in affairs that were “internal matters of the People’s Republic of China”.

Last week, Germany granted a three-year refugee status to a student who had been arrested at a pro-democracy protest in November last year and charged with riot offences. The 22-year-old told media she had fled to Germany via Taiwan because she did not believe she would be given a fair trial.
In a statement on Wednesday evening, the government accused Germany of granting refugee status to a suspect who had “committed serious crimes and jumped bail”.

It said Cheung and the secretary for security, John Lee, had called a meeting with Germany’s consul general, Dieter Lamlé, to lodge Hong Kong’s strong objections.

“Mr Cheung also stressed that anyone accused of breaching the law will face an open and fair trial,” the government said. “The Hong Kong courts will, as always, with their sound rule of law and human rights protection, handle all cases in an independent, fair and just manner.”

“Mr Cheung reiterated that foreign governments should stop interfering in Hong Kong affairs, which are internal matters of the People’s Republic of China.”

More than 10,000 people have been arrested in relation to the 2019 protests which drew millions to the streets of Hong Kong. Many have been charged with rioting – a contentious allegation that carries a punishment of up to 10 years in jail. Among the five core demands of the movement is an official retraction of the “riot”designation given to some of the events.

While the mass protests have largely stopped since the pandemic and the implementation of Beijing’s draconian national security law, few of the thousands arrested have gone through the courts.

On Wednesday, prosecutors reportedly dropped charges against two people in the middle of their trial, after media footage was shown to contradict police testimony against them. According to local media there have been at least half a dozen cases in recent weeks where charges have been withdrawn, some under similar circumstances.

Hong Kong protesters have fled in droves, including to Taiwan, Australia, Canada, the UK, and the US, seeking asylum. In a high-profile case that caught the attention of campaigners around the world, 12 Hongkongers were detained in China after they were caught by the coastguard attempting to reach Taiwan by boat.

Germany has previously granted asylum to Hong Kong activists but the student is believed to be the first associated with the 2019 anti-extradition and pro-democracy movement.

In 2018, Ray Wong and Alan Li, were granted political asylum by Berlin after they fled rioting charges relating to protests in 2016 – known as the Fishball revolution in Mong Kok – which turned violent.

Wong and Li have since founded a Hong Kong refugee organisation in Germany, Haven Assistance, and this week they thanked German authorities for granting the student asylum but urged them improve the services and process for refugees. The student said she had spent 10 months in a refugee camp, where she was assaulted.