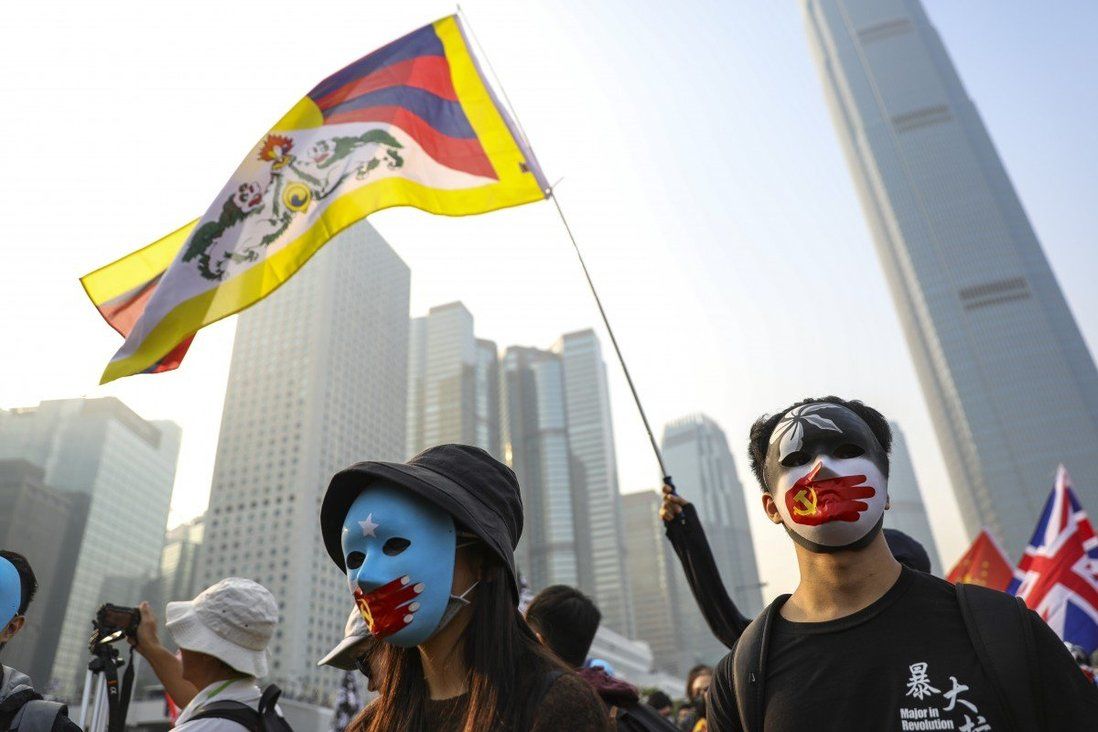 Remorseful Leung Ka-wai pleaded guilty in District Court over his role in the incident in December 2019, when an approved rally descended into chaos after a protester tore down Chinese flag.

An unemployed man has been jailed for 28 months for rioting and assaulting police after he tried to snatch an arrested protester during a Hong Kong rally in support of China’s Uygur population two years ago.

Leung Ka-wai, 22, on Tuesday pleaded guilty in the District Court over his role in a police-approved rally that descended into chaos after a masked protester took down the Chinese national flag from a pole and flung it to the ground in Edinburgh Place, Central, just after 5pm on December 22, 2019.

Police arrived to retrieve the flag and turned to leave as the person responsible had fled, but soon found themselves surrounded by a bigger group, who scolded the officers, according to acting assistant director of public prosecutions Betty Fu Yuet-yee.

The prosecutor said a group of no less than 50 protesters assembled in the area and disrupted public order by violent acts that included attacking police and hurling objects such as water bottles at the officers. 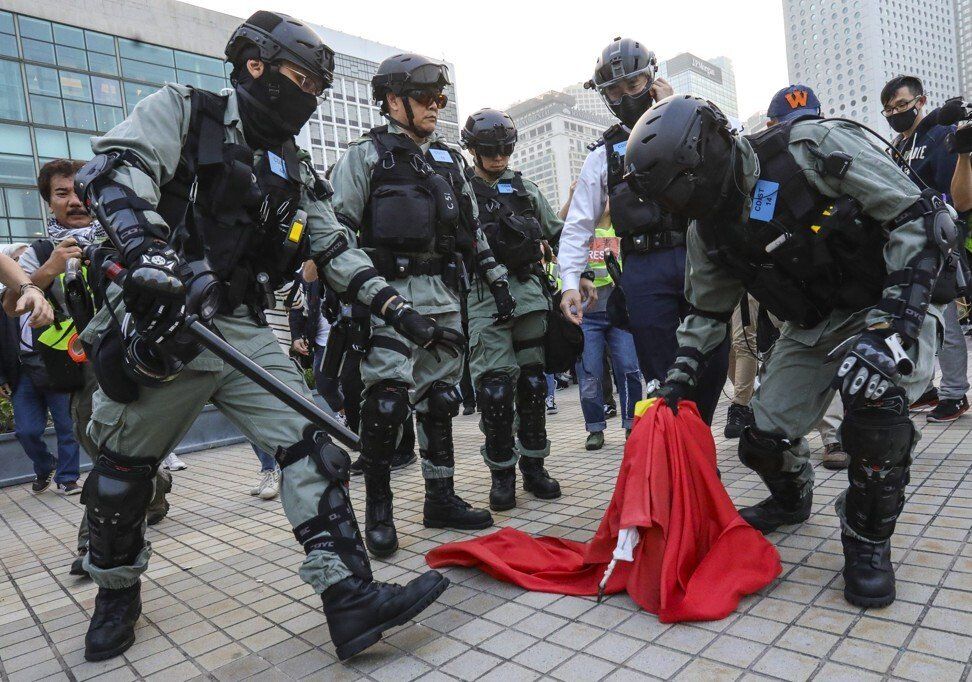 Riot police pick up a Chinese national flag after it was pulled down from a pole in Hong Kong.

A man, later identified as Luk Ka-yu, was subdued after he allegedly kicked a senior inspector’s back.

Fu said a second man, Siu Tsz-fung, then pulled Luk’s backpack in what she said was an attempt to help him evade arrest. Siu was then arrested, while Luk allegedly escaped with the help of others.

The protesters also continued to clash with officers as Siu was being subdued on the ground, Fu said.

Leung was among those on the front line, jumping towards a sergeant and pushing him with both hands in an attempt to knock him to the ground, only to be arrested by the officer.

Four officers suffered minor injuries in the incident, ranging from abrasions to soreness.

On Tuesday, Leung, who had no prior convictions, pleaded guilty to one count of rioting and another of assaulting police. Rioting is punishable by 10 years in prison, but that term is capped at seven years when the case is heard in District Court.

In mitigation, defence counsel Lawrence Hui said Leung was deeply sorry and proactively sought counselling from social workers to improve his law-abiding awareness, as could be seen from his record of attending 18 consultation sessions offered by the Evangelical Lutheran Church of Hong Kong.

Leung’s parents and sister also wrote to the court saying he had reflected on himself and grown closer to the family after the incident. They pleaded for leniency and said they would offer more guidance and support to him in the future. 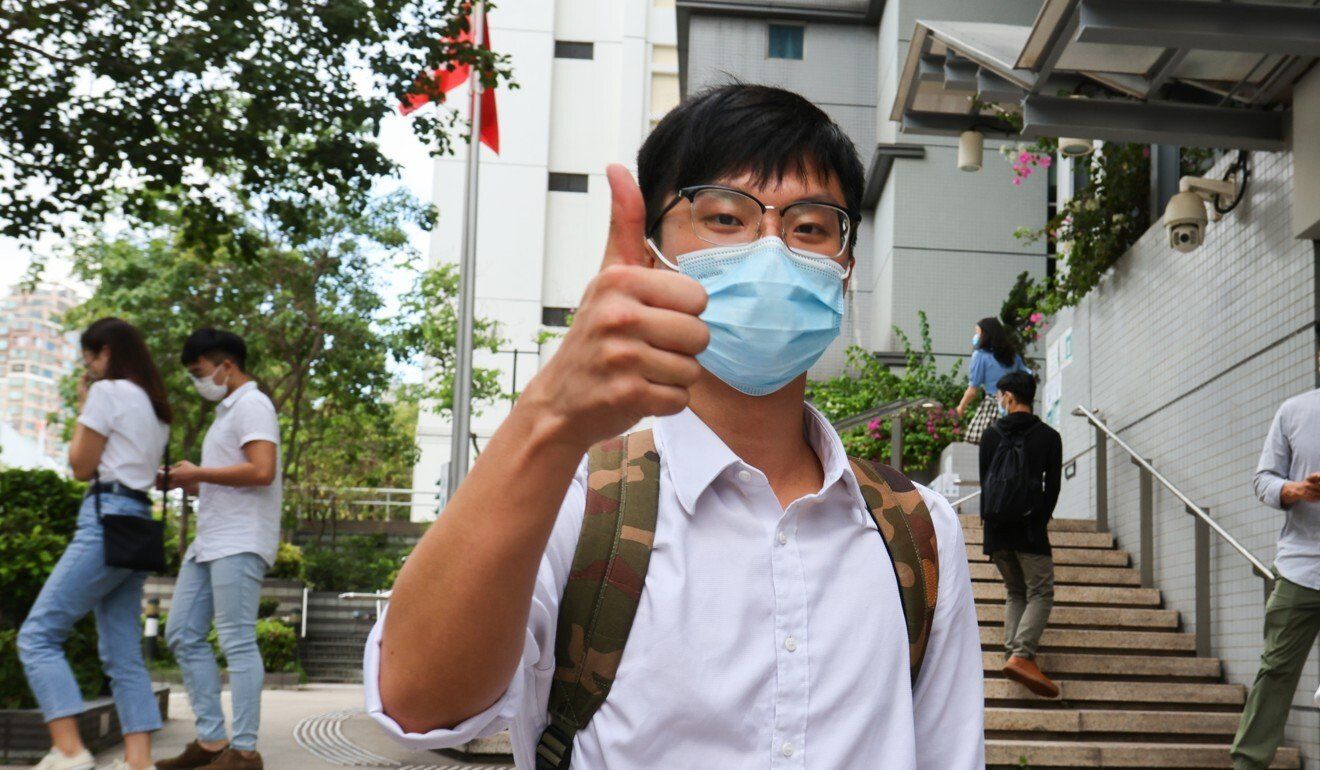 Owen Au was convicted to taking part in an unlawful assembly.

Judge Edmond Lee Chun-man said rioting was a serious crime, which in this case was aggravated by the fact that Leung had committed a second offence by assaulting police.

But the judge also observed that this riot was relatively less serious, in terms of its spontaneous nature, short duration of 20 minutes and small scale with limited disruption to public life and traffic.

Lee accepted that Leung was a young man who acted in the heat of the moment and proactively sought help in the aftermath with his family’s support.

Leung has been remanded since February 16, when he indicated his intention to plead guilty and offered to have his bail revoked.

His co-defendants, Luk and Siu, will stand trial next year, slated for five days beginning on March 14.

Separately, a university student leader was convicted of taking part in an unlawful assembly and remanded in custody ahead of sentencing, after he was caught blocking a carriageway with a rubbish container during a protest in Mong Kok on October 20, 2019.

Owen Au Cheuk-hei, chairman of the student union’s provisional executive committee at Chinese University, was additionally found guilty at Kowloon City Court of carrying a bottle of spray paint with intent to damage property and breaking the government’s mask ban.

He was one of five defendants charged in relation to the disturbance at the junction of Argyle Street and Tong Mi Road, when dozens of demonstrators gathered that night to block traffic.

The other four defendants, including two university students, were convicted of a total of 10 charges including taking part in an unlawful assembly, assaulting a police officer and possession of offensive weapons. They all had their bail revoked ahead of sentencing on June 2.