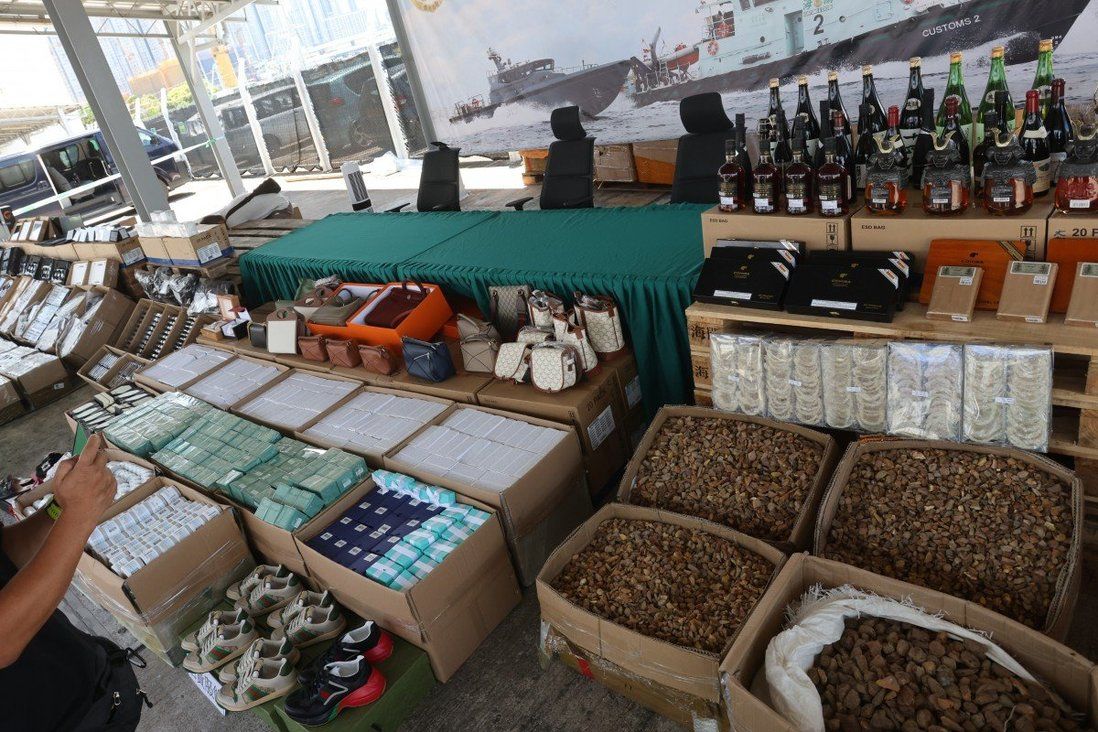 Goods seized on both sides of the border included luxury items and cosmetics, as well as endangered species.

Hong Kong and mainland Chinese authorities confiscated a huge haul of luxury items and endangered species worth as much as HK$300 million (US$38.7 million) across the border in a joint operation against a smuggling syndicate, customs officials said on Thursday.

In Hong Kong, customs officers seized contraband valued at HK$120 million locally, but worth twice as much on the mainland market. The Shekou-bound haul included more than 66,000 luxury and cosmetics products, nearly 2.3 tonnes of high-value foodstuffs and more than 400 endangered plants.

Just over the border, mainland authorities seized over 2.4 tonnes of scales from endangered pangolins, worth 50 million yuan (HK$60 million), in warehouses in three provinces: Anhui, Guangdong and Guangxi.

Four men, including one believed to be the ringleader of the syndicate, were arrested in a series of raids across Hong Kong, while another 11 people, believed to be members of the group’s mainland partners, were rounded up across the border. 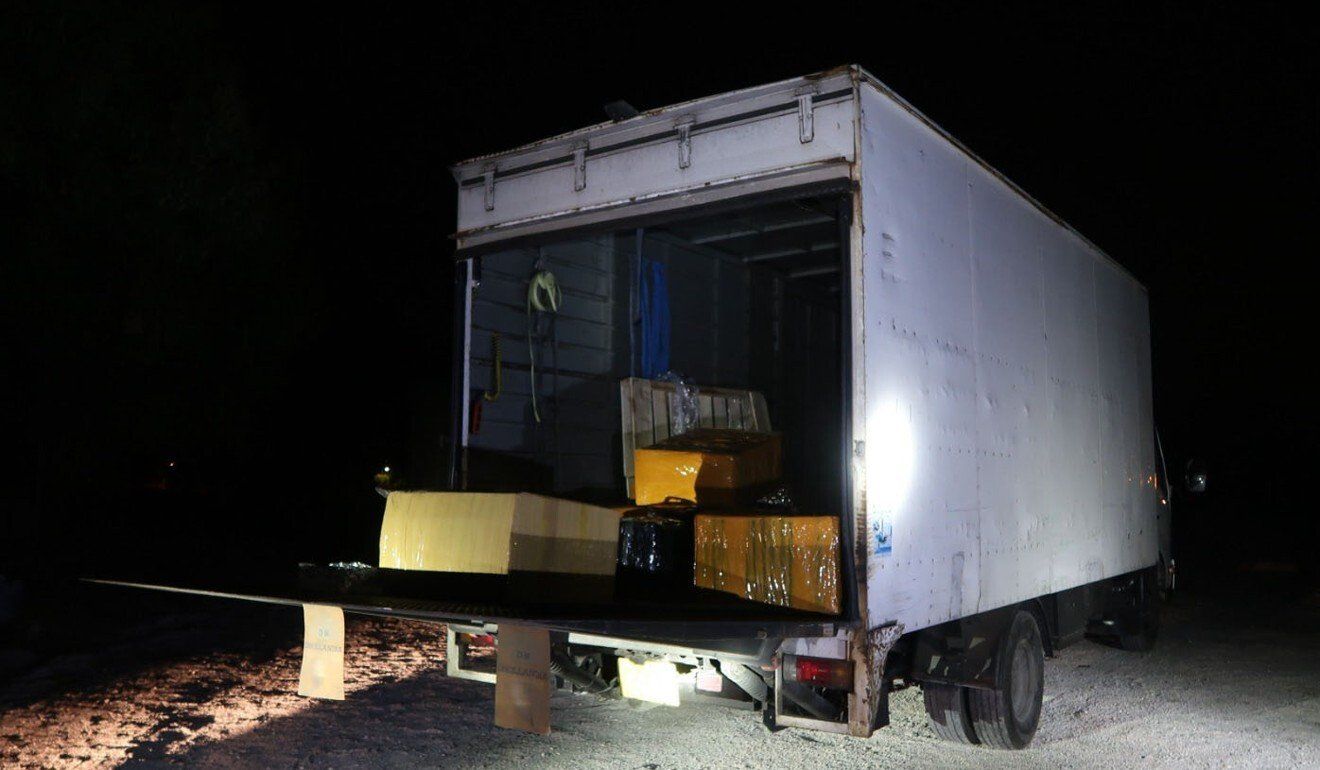 Authorities began investigating the syndicate and its mainland partner a few months ago.

Customs officers made the bust and the arrests last week, but it took days to categorise, count and weigh the enormous haul, according to a law enforcement source.

He said officers also had to verify with conservation department employees the types of endangered species involved.

“It is Hong Kong customs’ biggest-ever seizure in a [speedboat] smuggling case in terms of the value of the goods,” said Chan Tsz-tat, assistant commissioner of the Customs and Excise Department.

Chan noted the total value of this year’s busts was more than twice the HK$160 million worth of contraband seized in the entirety of 2019. In 2020, customs officers ultimately confiscated a total of HK$590 million of goods.

Hong Kong and mainland authorities first began investigating the syndicate and its partners in March.

Following a three-month investigation, customs officers laid an ambush in the small hours of June 2 at a coastal area in Lau Fau Shan less than two minutes by speedboat from the maritime boundary between Hong and the mainland

Soon after 2am, a truck drove up to the site, with a speedboat arriving shortly thereafter. Officers moved in as several men were loading boxes of goods onto the speedboats, but the suspects jumped aboard the vessel and sped off.

The office seized about HK$80 million worth of contraband left behind in the truck.

In a series of raids on three warehouses and a residential flat in the New Territories on the same day, officers arrested four men, aged 35 to 62, and seized another HK$40 million worth of goods in one of the storage facilities in Sheung Shui.

According to the customs department, the Hong Kong syndicate purchased goods from all over the world, stored them in different warehouses and repackaged them before arranging delivery to a loading site. Its mainland partners would then send speedboats to the city to pick up the goods and deliver them to buyers across the border.

Describing the group as “well organised”, Senior Superintendent Mark Woo Wai-kwan, head of the Customs and Excise Department’s syndicate crimes investigation bureau, said the gang exercised caution and carried out sophisticated air, land and sea counter-surveillance in an effort to avoid being caught.

Referring to the gang’s ill-fated operation in Lau Fau Shan last week, Woo said: “The syndicate deployed several speedboats to patrol the sea, and its members worked as lookouts on shore to check around the loading site. They also used drones [equipped with night-vision cameras] to assist their counter-surveillance activities.”

He said it was the first time officers found drones being used in a smuggling operation.

Superintendent Rita Li Yim-ping, of the same bureau, said the syndicate also deployed a high level of security around their warehouses.

“The warehouses were equipped with many surveillance cameras. We also found bedding items inside. We believe workers who were recruited to do packaging work also guarded the warehouses around the clock because of the storage of expensive goods,” she said.

Customs officers are still investigating how long the syndicate was in operation. The investigation is continuing and further arrests are possible.

Last week’s seizures in Hong Kong included HK$19 million worth of cosmetics and more than 25,000 luxury items with an estimated value of HK$29 million.

Those items included pricey watches, handbags, accessories and apparel. Most of the goods were from famous brands, and some were limited editions.

The most valuable segment of the haul, however, was the 2.3 tonnes of foodstuffs estimated to be worth HK$71 million. The seized delicacies included dried swim bladders from fish, shark fin, sea cucumber, bird’s nest and abalone.

Electronics and expensive wines and cigars were also among the contraband.

According to the department, the seized items are subject to taxes of between 100 and 160 per cent on the mainland.

Chan, the assistant commissioner of the customs department, said some of the seized plants were critically endangered and not native to Hong Kong, such as living rock and star cactuses endemic to the United States and Mexico.

Chan attributed this year’s surge in the seizure of contraband goods to travel restrictions imposed amid the coronavirus pandemic.

“In the past, lots of these luxury goods were delivered from Hong Kong to mainland China by tourists or passengers, but they cannot do it under the pandemic. Smuggling rings have no other means but to resort to smuggling by sea,” he said.

He said authorities would enhance enforcement action and cooperation with their mainland counterparts and other law enforcement agencies to combat such illegal activities.

The city’s biggest sea smuggling bust ever came in 2008, when HK$200 million worth of contraband items were seized aboard a cargo vessel. The goods included food, furs, ginseng and electronics.

In Hong Kong, the maximum penalty for importing and exporting unmanifested goods is seven years in jail and a HK$2 million fine.

The import and export of an endangered species or its parts without a licence is punishable by up to 10 years in prison and a HK$10 million fine.