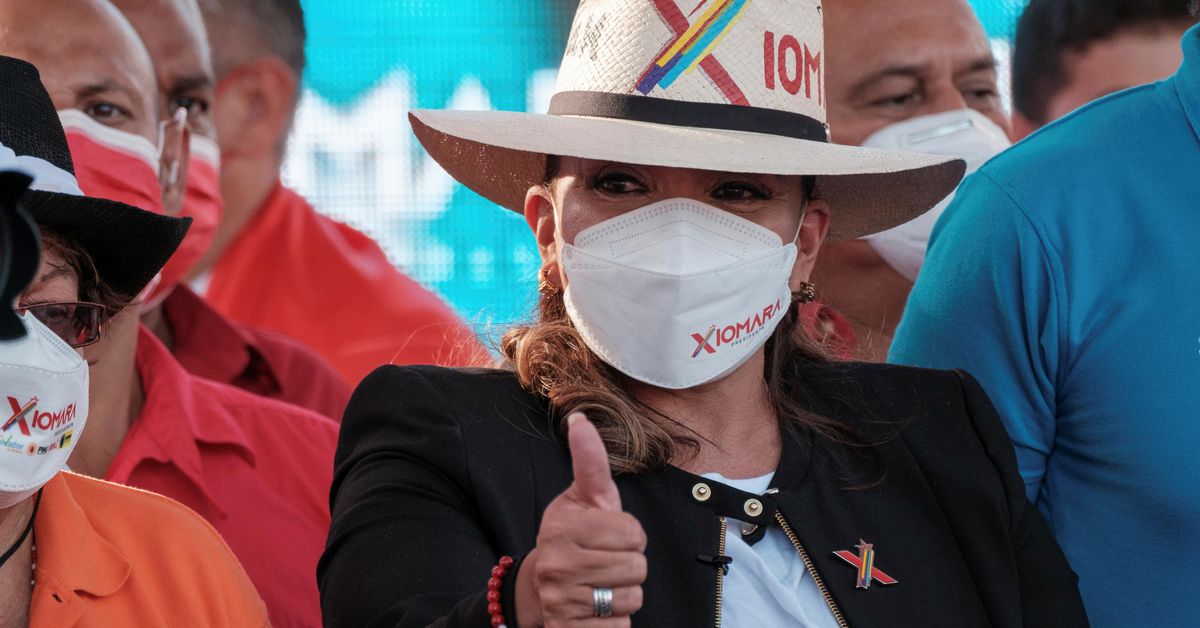 Leftist Xiomara Castro has a shot at winning an election on Sunday, to become Honduras' first female president and end years of conservative rule marred by graft and ties to drug smugglers.

An alliance with former rival candidate Salvador Nasralla, a popular television host, gave a boost in the polls to Castro, 62.

She has said that if she beats ruling-party candidate Nasry Asfura, she will explore establishing diplomatic ties with China, which could cause tension with Washington.

But U.S. President Joe Biden, who sees weak rule of law in Central America as driving heavy migration to the United States, may approve of her pledge to enlist U.N. help to build an anti-corruption agency.

"We are going to build a fair and competitive Honduras that fights corruption and drug trafficking," Castro said last week of her bid to make history as first woman president in the Central American nation, among the poorest in the Western Hemisphere and a leading source of migrants reaching the U.S. border at record levels.

Her husband, former President Manuel Zelaya, was deposed in a 2009 coup after aligning with late Venezuelan president Hugo Chavez, a socialist. His successors, former president Porfirio Lobo and President Juan Orlando Hernandez, both of the National Party, have both been caught up in allegations of ties to drug smugglers. Zelaya also was accused of taking bribes from traffickers. They have all denied wrongdoing.

Last month, Castro allied with 2017 runner-up Nasralla. An opinion poll by Tegucigalpa-based democratic studies institute CESPAD after the tie-up showed her with a 17-point lead over Asfura, of the ruling National Party.

However, not all polls give her such a commanding lead; a rival survey on the same day from a local television station showed a tied race.

The contest promises to be the latest shake-up in the volatile politics of Central America, where democratic standards have eroded in recent years in Honduras and neighbors El Salvador, Guatemala and Nicaragua. Throughout the region, increased migration has been tied to corruption turbo-charged by transnational drug gangs.

The United States has long played a defining role in Honduran politics, basing troops there since the Cold War and backing Hernandez even after claims of fraud in his reelection four years ago.

"We urge the U.S. government not to make this mistake again," wrote Gustavo Irias, head of CESPAD, in a published commentary this week.

Asfura, a two-term capital city mayor, is popular for local building projects. He has not issued a campaign platform, unlike Castro.

No matter which candidate is elected, Biden's administration is likely to face a dilemma over how to re-calibrate relations with Tegucigalpa.

"We think it's going to be a really close contest," said Tiziano Breda, analyst with the International Crisis Group for Central America. He pointed out that opposition voters could be confused by Nasralla's name, which remains on the ballot despite the tie up.

A robust presence of election observers is expected at Sunday's election, in which the Honduran Congress and other local races are also up for grabs.

A close race would raise the risk of irregularities, observers fear. The National Party has a history of using state resources to mobilize voters.

U.S. Senator Tim Kaine, a keen observer of Honduras, expressed unease about the likelihood of a fraud-free vote.

"I'm very worried about it," he said in a phone interview, citing migration and drug trafficking among issues fueled by corruption that made the future of Honduras important for the United States.

"We ought to pay more attention," he said. "Our future destinies are going to be clearly linked to each other."

On Wednesday, Kaine and Republican Senator Marco Rubio jointly signed a letter to U.S. Secretary of State Antony Blinken warning of "political instability and violence" if Honduran and foreign observers perceived the election results as illegitimate.

If Castro prevails, one of Washington's main concerns will be whether she goes ahead with her pledge in September to switch Honduras' decades-long diplomatic support for Taiwan to China, a senior Biden administration official told Reuters on condition of anonymity.

A U.S. delegation has urged the Honduran candidates to keep ties with Taiwan.

President Hernandez has also previously toyed with switching allegiances to China, but this month traveled to Taiwan to re-emphasize their ties. While a shift would irritate Washington, it could diversify and balance out Honduras' superpower ties, Breda said, attracting more infrastructure finance.

If the 63-year-old Asfura wins, the U.S. administration is guardedly optimistic they could still make some inroads against corruption but is mindful that graft is so engrained in the National Party that it will take a long time to chip away at it, the U.S. official added.