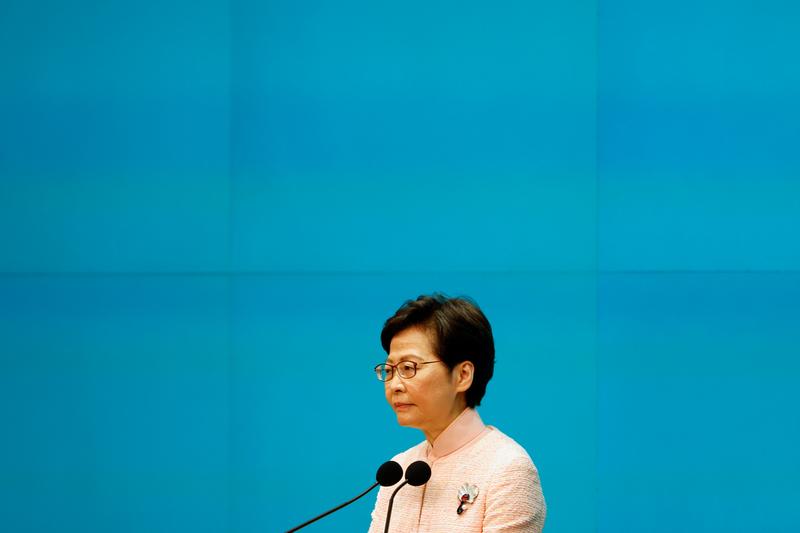 Hong Kong leader Carrie Lam said on Tuesday “ideologies” posed risks to national security and urged parents, teachers and religious leaders to observe the behaviour of teenagers and report those who break the law to the authorities.

The financial hub has taken a swift authoritarian turn since China’s imposition of a sweeping national security law last year and changes to its political system to reduce democratic participation and oust people deemed disloyal to Beijing.

At her weekly news conference, Lam expressed dismay at some residents mourning the death of a 50-year-old who stabbed a policeman before killing himself on July 1, the anniversary of the former British colony’s return to Chinese rule and the Chinese Communist Party’s centenary.

“For a long time, citizens have been exposed to wrong ideas, such as achieving justice through illegal means,” Lam told reporters, adding that national security risks stemmed not only from “public order” acts, but also from ideology.

About an hour after Lam spoke, police said they had arrested nine people, including six secondary students, on suspicion of terrorist activities.

Police said they seized triacetone triperoxide (TATP) in a hostel room they described as a laboratory for bomb-making equipment to deploy at a cross-harbour tunnel, railways, court rooms and rubbish bins.

The city has been polarised since protesters took to the streets in 2019 demanding greater democracy and accountability for what activists called police violence. Authorities have said the protests were fuelled by foreign forces and exposed risks to national security.

Since the security law was introduced, the most prominent government opponents have been jailed or fled abroad. Critics say the legislation has crushed the city’s wide-ranging rights and freedoms, while supporters say it has restored stability.

Government departments “shouldn’t allow illegal ideas to filter through to the public through education, broadcasting, arts and culture, beautifying violence and clouding the conscience of the public,” Lam said.

“I also call on parents, principals, teachers, and even pastors to observe acts of teenagers around them. If some teens are found to be committing illegal acts, they must be reported.”

Police and security officials said the stabbing of the 28-year-old policeman was a “terrorist,” lone-wolf attack, based on unspecified materials found on the attacker’s computer.

People went to the scene of the attack on Friday, some with children, to pay their respects to the attacker and lay flowers, drawing condemnation from Lam and other officials.

Lam said residents should not be deceived by messages circulating online suggesting the government had any responsibility for the violence, or by slogans such as “there’s no violence, only tyranny.”

“Do not look for excuses on behalf of the violent,” Lam said.
Add Comment