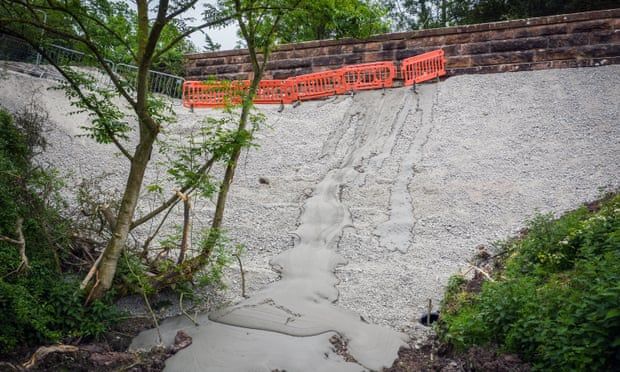 Highways England may have to reverse act of ‘cultural vandalism’

The government’s roads agency could be forced to remove hundreds of tonnes of concrete it used to fill in a Victorian railway arch in a project that was condemned as the first act of “cultural vandalism” in a nationwide plan.

Eden district council told Highways England (HE) this week that it needs to apply for retrospective planning permission for a scheme that involved pouring an estimated 1,000 tonnes of concrete and aggregate under the bridge at Great Musgrave, Cumbria, at the start of nationwide programme to infill scores of historic structures.

If planning is refused, the agency will be obliged to restore the bridge to its state before the infill began at the end of May.

Campaigners hope the move will frustrate the agency’s plans to fill in more than 100 other Victorian rail structures, including a bridge in Saltash, Cornwall, designed by the pioneering Victorian engineer Isambard Kingdom Brunel.

They also fear for the immediate future of two Victorian bridges in Dumfries and Galloway, which are also managed by HE, despite lying over the border in Scotland. The agency has been given the go-ahead to fill in bridges at Kirtlebridge and Lochanhead, again with no need for planning permission.

Graeme Bickerdike, a member of the HRE Group, an alliance of engineers and sustainable transport advocates campaigning to retain the historical railway estate as an asset, accused HE of “scaremongering” over the condition of such structures.

On Eden’s decision to request planning permission, he said: “It will come as a relief to disfranchised stakeholders that they will belatedly get the opportunity to express their views on this unwarranted infilling scheme.

“The requirement for planning permission should have been recognised from the outset. Hundreds of tonnes of aggregate and concrete were used to bury the bridge, with no scrutiny of the heritage, environmental, ecological, transport and sustainable development implications.”

When images of the Musgrave Bridge “repair” were first published, they provoked widespread condemnation. Civil engineers said it made them ashamed of their profession, and Richard Faulkner accused Highways England of “cultural vandalism” during a House of Lords debate earlier this month.

But the government has defended the decision. The transport minister, Charlotte Vere, said: “The structure was weak, potentially causing the bridge deck to fall suddenly … Highways England made the decision to proceed on the grounds of public safety.”

In response to concerns from Huw Merriman, chair of the Commons transport committee, Lady Vere said in letter earlier this month that HE initially had plans to fill in 115 structures, but alternative plans for 46 of these were now being considered.

On Wednesday, Bickerdike described Vere’s portrayal of the Great Musgrave bridge as unsafe as “either a deliberate attempt to deceive or a demonstration of incompetence”.

He pointed out that HE’s own engineers noted that the bridge presented “no significant risk” and recommended repointing at a cost of £5,000 compared with the £124,000 cost of infilling.

He added: “I fear there is a malevolent force in the Department for Transport that wants to get rid of much of the historic railway estate as possible. It is pushing alongside HE’s stifling culture of risk aversion and lack of understanding of historical railway structures.”

Richard Marshall, HE’s historical railways estate director, said: “The bridge was deteriorating, and no weight restriction was in place, meaning it could be used by vehicles of any weight. The support provided by infilling the arch removes the risk of the bridge deck failing.”

He added: “Our work has preserved the structure. The bridge remains intact and supported. If the land and Eden River crossing issues get resolved, then we would be delighted to work with any rail groups and the local authority to remove the infill at no cost to them.”
Add Comment