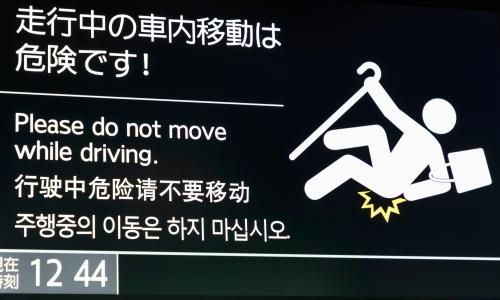 Encountering mangled English is a frequent source of mirth for many residents of Japan, but for one group of language professionals, the proliferation of inappropriate words and phrases is becoming a national embarrassment.

Their recently formed group, loosely translated as the association for the consideration of Japan’s English, is taking local governments and other bodies to task for their over-reliance on machine translation on official websites and public signage.

While many English-speakers in Japan will have encountered hilarious – and often nonsensical – slogans on bags and T-shirts, the group is most concerned about the negative impact that official miscommunications could have on tourism and Japan’s growing foreign community in the case of an earthquake or a medical emergency.

Since launching their group several months ago, the seven women, mostly graduates of Columbia Business School, have identified a range of culprits.

The official website of Meguro ward in Tokyo, for example, renders kurashi – or “living” – as “dark matter”, while the Kobe municipal government, turns sumai (home) as “I’m sorry”, the machine translation having apparently misread the original word as sumanai, a casual form of apology.

“They produce unintentionally funny translations that could easily be corrected if they were just checked by an English speaker,” said Tsuruta, adding that Chinese- and Korean-speaking colleagues had noticed similar issues with those languages.

Her group, comprising interpreters, researchers and employees of foreign companies, had long been frustrated by the widespread use of wasei-eigo – Japanese-made English – in official literature, advertising and marketing. “We were talking about it over lunch and decided we no longer wanted to feel embarrassed about poor English usage,” she said.

The volunteers have started contacting local governments and have so far received positive responses. Local authorities in Urayasu – home to Tokyo Disneyland – have set up a working group that is expected to make recommendations to improve the city’s multilingual online services later this year.

“We’re not trying to look down on people or make fun of them,” Tsuruta told the Guardian. “But with the Olympics probably happening next year, we want official English to be decent and presentable to the rest of the world.

“And foreign people living in Japan should at the very least be given accurate, understandable information, especially if they need to evacuate after a natural disaster. It could be a matter of life or death”.

The group’s members appear to be divided, however, over the merits of using irregular, but nonetheless catchy, English titles for government business, including Hello Work (job centres), My Number (a 12-digit ID system), and, more recently, Go To Travel, a subsidised scheme to encourage domestic tourism during the coronavirus pandemic.

Even major corporations occasionally fall into the wasei-eigo trap, Tsuruta said, citing Hitachi’s long-running “Inspire the Next”, and Toyota’s Olympic-inspired “Start your Impossible”.

The association will have its work cut out should it choose to take on the misuse of English in advertising and design.

The longstanding practice of using English words and phrases to give a product, service or campaign a cosmopolitan feel has produced several classics, including Nissin’s “Boil Japan” promotion for its Cup Noodles.

Seven years ago, the mascot of Fukushima Industries, an Osaka-based manufacturer of industrial cooling systems, made international headlines after understandable associations were made with Japan’s handling of the Fukushima nuclear meltdown. The mascot’s name: Fukuppy.

Others, though, are guilty only of the same poor punctuation found on shop signage in countries where English is the first language. This month, Takashimaya department store in Kyoto was forced to cover up posters after social media users pointed out how a missing comma had sabotaged its simple, and supposedly inspirational, message.

“Rising Again,” it began. “Save the World from Kyoto JAPAN.”
Add Comment