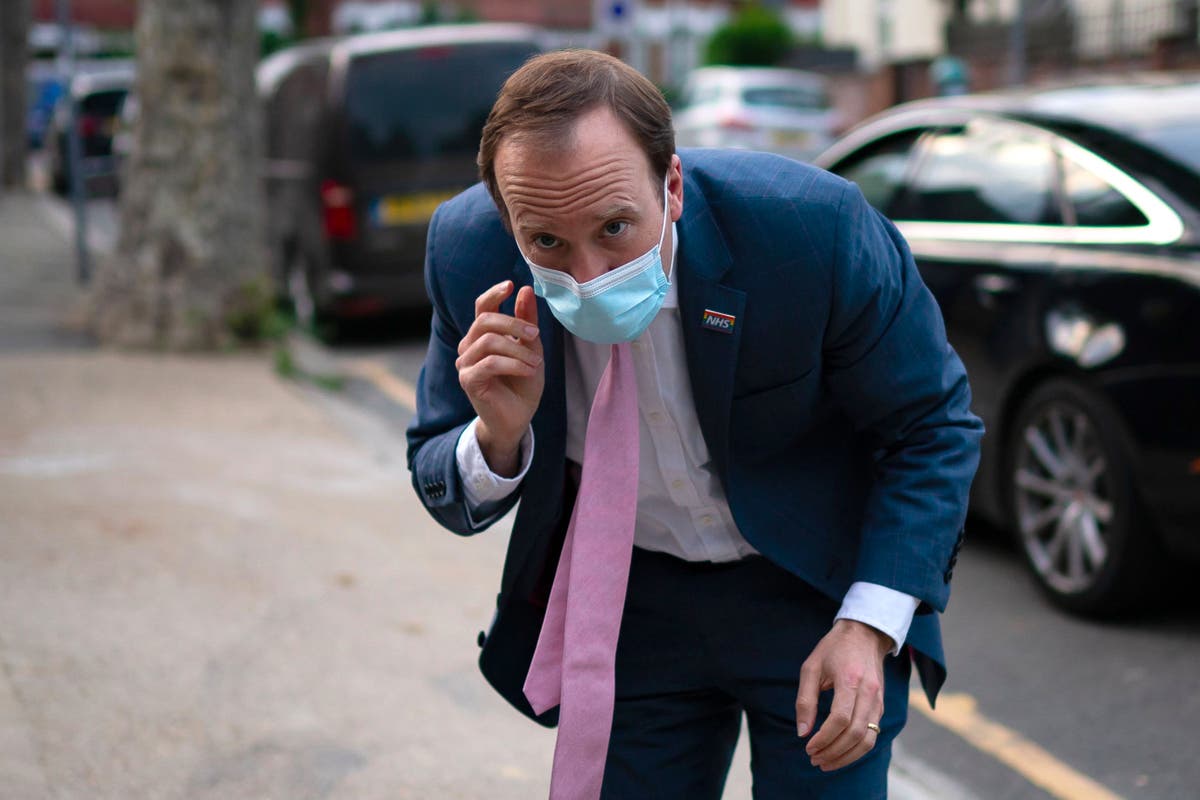 Matt Hancock has said he did not watch all of Dominic Cummings' testimony to MPs and instead was dealing with the vaccination rollout - and "saving lives".

The Health Secretary was repeatedly attacked by the Prime Minister's former adviser during a seven-hour-long committee hearing on Wednesday.

Mr Cummings said he believed Mr Hancock should have been sacked for "at least 15-20 things including lying to everybody on multiple occasions in meeting after meeting in the Cabinet room and publicly".

As he arrived at his north London home on Wednesday evening, Mr Hancock was asked for his reaction to Mr Cummings’ allegations to MPs.

He replied: “I haven’t seen this performance today in full, and instead I’ve been dealing with getting the vaccination rollout going, especially to over-30s, and saving lives.

“I’ll be giving a statement to the House of Commons tomorrow and I’ll have more to say then.”

Downing Street did not deny that the Prime Minister considered sacking the Health Secretary in April last year but insisted Mr Johnson has confidence in him now, as Mr Hancock disputed the allegations.

Mr Cummings said there were around 20 reasons why Mr Hancock should have been thrown out of the Cabinet – including, he claimed, lying both in meetings and publicly. 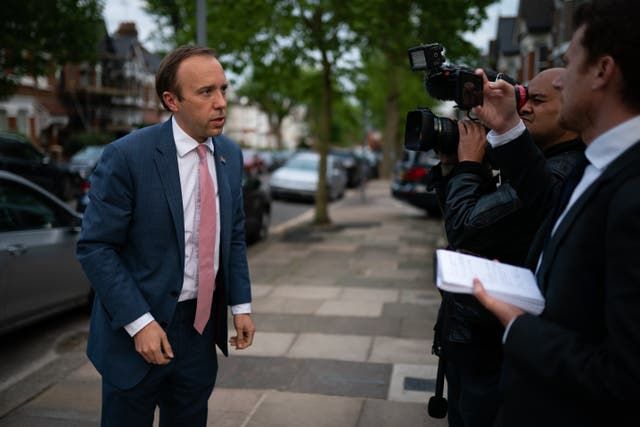 He said Mr Hancock performed “disastrously” below the standards expected and the cabinet secretary – the country’s top civil servant – recommended the Health Secretary should be sacked.

Mr Cummings said that while Donald Trump was ordering the CIA to “gazump” rival countries on orders for personal protective equipment (PPE), the Department of Health and Social Care (DHSC) was still trying to get orders from China by ship.

“I think the Secretary of State for Health should’ve been fired for at least 15, 20 things, including lying to everybody on multiple occasions in meeting after meeting in the Cabinet room and publicly,” Mr Cummings said. 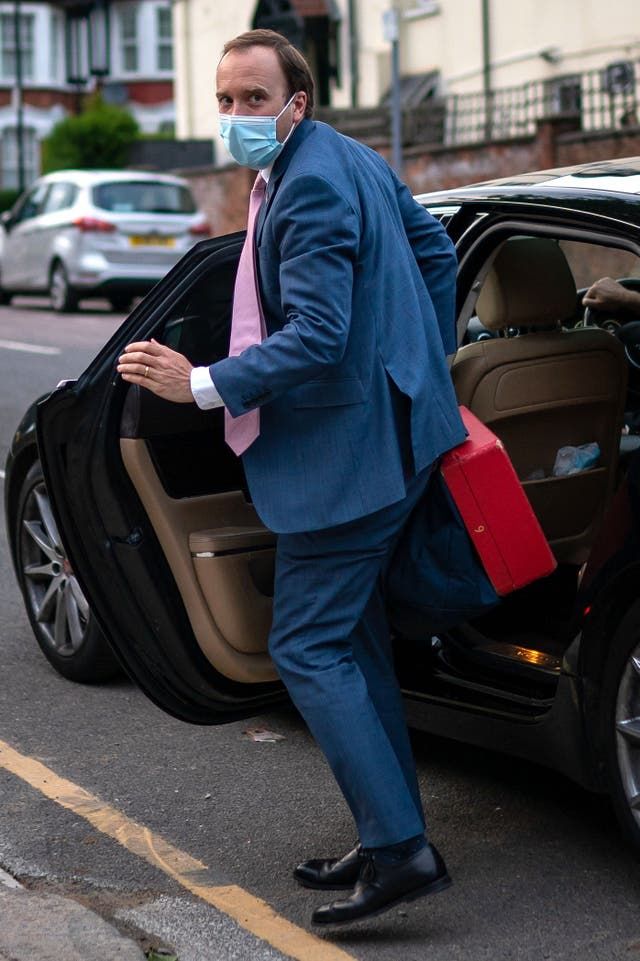 “There’s no doubt at all that many senior people performed far, far disastrously below the standards which the country has a right to expect. I think the Secretary of State for Health is certainly one of those people.

“I said repeatedly to the Prime Minister that he should be fired, so did the cabinet secretary, so did many other senior people.”

Sir Mark Sedwill was the cabinet secretary until September 2020, a period which covered the first phase of the pandemic.

Mr Hancock was lined up to lead a coronavirus press conference from Downing Street on Thursday as he rejected Mr Cummings’ allegations.

“We absolutely reject Mr Cummings’ claims about the Health Secretary,” a spokesman for Mr Hancock said.

“The Health Secretary will continue to work closely with the Prime Minister to deliver the vaccine rollout, tackle the risks posed by variants and support the NHS and social care sector to recover from this pandemic.”

He insisted the Health Secretary had “worked incredibly hard in unprecedented circumstances to protect the NHS and save lives”.

Mr Hancock will appear before the same committee where the series of hard-hitting allegations were levelled on June 10.

Mr Cummings has previously described Mr Hancock’s department as a “smoking ruin” which could not cope with the demands of the pandemic.

On the claim that Mr Hancock lied, Mr Cummings said: “There are numerous examples.

“In the summer he said that everybody who needed treatment got the treatment they required. He knew that that was a lie because he had been briefed by the chief scientific adviser and the chief medical officer himself about the first peak.

“We were told explicitly people did not get the treatment they deserved, many people were left to die in horrific circumstances.”

Mr Cummings said he asked the cabinet secretary to investigate, who came back and said “it is completely untrue, I have lost confidence in the Secretary of State’s honesty in these meetings”.

The former aide said Mr Hancock’s public promise to deliver 100,000 tests a day by the end of April was “incredibly stupid” because it was already an internal goal.

“In my opinion he should’ve been fired for that thing alone, and that itself meant the whole of April was hugely disrupted by different parts of Whitehall fundamentally trying to operate in different ways completely because Hancock wanted to be able to go on TV and say ‘look at me and my 100k target’.

“It was criminal, disgraceful behaviour that caused serious harm.”

Accusing Mr Hancock of “appalling” behaviour towards Prof Whitty and Sir Patrick, Mr Cummings said: “He used the whole ‘we’re following the science’ as a way so that he could always say, ‘well if things go wrong, we’ll blame the scientists and it’s not my fault’.”

He suggested Mr Johnson kept Mr Hancock in place because he was told “you should keep him there because he’s the person you fire when the inquiry comes along”.

At Prime Minister’s Questions, Mr Johnson was asked whether the cabinet secretary had “lost faith in the Health Secretary’s honesty”.

Mr Johnson said: “The answer to that is ‘no’ and I’m afraid I haven’t had the benefit of seeing the evidence that he is bringing to the House, but I must say that I think what the people of this country want us all to do is to get on with the delicate business now of trying to reopen our economy and restore people’s freedoms, get back to our way of life by rolling out the vaccine.”