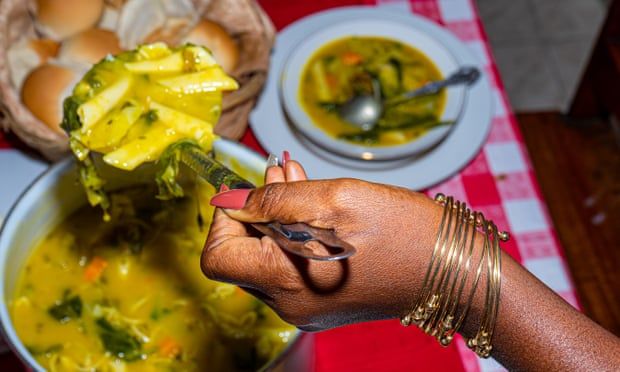 Haiti’s New Year’s Day soup has made headlines. But let’s not be naive about its symbolism

Whispers. Curfews. Never-ending military parades and shows of arms. Opponents’ bodies exposed for children to see as some sort of macabre art. And always, that nasal voice of “Papa Doc”, François Duvalier, chanting on all radio stations. Those were the days of my childhood under a dictator in Haiti.

But on 1 January, Independence Day, there were three things that made a difference.

Children in domestic service would visit their godmother and godfathers’ houses, where an envelope containing a few piastres (money) was waiting for them, probably the only gift they would receive during the year.

Patriotic verses and folkloric songs slipped into the official ceremonies. A touch of art between long and scary diatribes against “the enemy” and unconditional pledges of allegiance to the “chief”.

The third was the “joumou”, a soup traditionally shared on the first day of a new year.

At the time, the soup only meant to me that my parents had not made new friends. The same faces were invited to eat it together every year: a very tall judge, a one-eyed lawyer who claimed to be able to communicate with the dead, and selected members of the larger family.

When I was old enough to invite people to my place to share the 1 January soup joumou, I realised it was a difficult decision. I too had a very short list of people, with few changes from one year to another. I became my parents – no new friends, which was understandable if by “friends” one means people with whom you have shared ordeals and hopes, in the company of whom you feel not only happy but safe. Soup joumou, even for a confirmed atheist, is the centre of a sacred gathering. It would be among your worst memories to remember you shared the soup joumou with someone who was, in fact, a traitor.

Between eight and 10 in the morning when it is served, soup joumou is a symbol of what we, as Haitians, bring to the world. Against the savagery of colonialism and modern slavery, we created Haiti, our language, and with it goods, ideas, ways of being, art and artefacts.

What is soup joumou to me personally? I do not ask myself. The great poet René Philoctète wrote a beautiful poem about the questions he does not ask himself: “why I stay here, why I do the things I do”. The answer is too simple: because that is the way of being myself. Without my soup joumou, I would feel odd or incomplete.

Now that everybody seems to want to talk about soup joumou, since its international recognition, the lack of confirmed historical references about its origins leaves the door open to recreations of the beginning of the tradition.

But one thing, at least, is for sure – lots of Haitians, descendants of its creators, cannot afford it. We should not forget that the elites and oligarchies – with the complicity of dominant capitalist states – derailed a revolution of modern times and made of Haiti a country in which social injustice, economic exploitation and cultural exclusion prevails.

Let us not be naive and make soup joumou the symbol of a togetherness that barely exists.

The soup is waiting, but a true national feast celebrating equality among Haitians is yet to come.
Add Comment