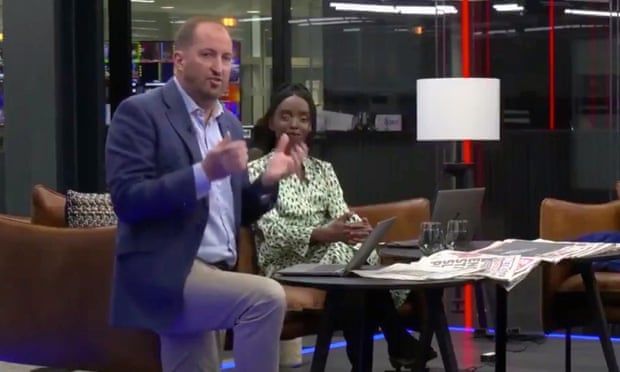 Guto Harri has quit GB News after he was suspended for taking the knee during a discussion about racism towards black footballers.

The former BBC news journalist had been taken off air by the rightwing news channel, but there was talk of him returning at some point.

On Sunday he vented his anger at the channel, describing it as “rapidly becoming an absurd parody of what it proclaimed to be”. At the same time it emerged that the former Ukip leader Nigel Farage was being hired by GB News to host a nightly prime-time show.

By Sunday afternoon it became clear that Harri had formally quit the channel. In his resignation letter, seen by the Guardian, he writes that he signed up “in good faith and with genuine enthusiasm”.

Written directly to GB chief executive Angelos Frangopoulos, he continues: “Before I took the knee on air I discussed it with my producer, director, co-presenters and head of newsroom. After I did it, GB News captured the moment and proactively cascaded it on social media.

“Two days later you told me you wanted me to take a break for the summer. You did not say you were briefing papers and issuing a statement that accused me of breaching your editorial standards.

“I asked you to change that on the night – pointing out it was defamatory. You ignored my texts and refused to take my calls. I now see that you’ve hired Nigel Farage who immediately declared in public that he will not be taking the knee.

“Please explain how that does not breach editorial standards but I did.”

Harri was Boris Johnson’s spokesman during his time as London mayor. He is also a regular at Hay festival and on its board of directors.

He said the resignation of John McAndrew as director of programming – a “decent, experienced professional executive who hired me” – had left him with no option but to follow suit.

The Guardian reported on Friday that McAndrew had come under pressure to dial down the focus on local reporting and free debate in favour of full-blooded culture war topics.

In his letter Harri writes: “You took me off air for backing the England football team making a simple public statement against racism while arguing that GB News is about celebrating the best of Britain, defending free speech, having the debates others won’t have and combatting the cancel culture. You are intelligent enough to see what an absurd parody of that your station has become.”

The channel has had a rocky start since it was launched in the middle of June with numerous technical problems. It attracted zero viewers during some of its broadcasts last week.

On Sunday GB News posted on Twitter a short film of Farage announcing his new show, to be broadcast four nights a week. “So please, be there or be square. Seven o’clock. Monday evening. Farage,” he said. “Oh, also, I won’t be taking the knee for anyone on this show.”
#boris johnson  #nigel farage
Add Comment