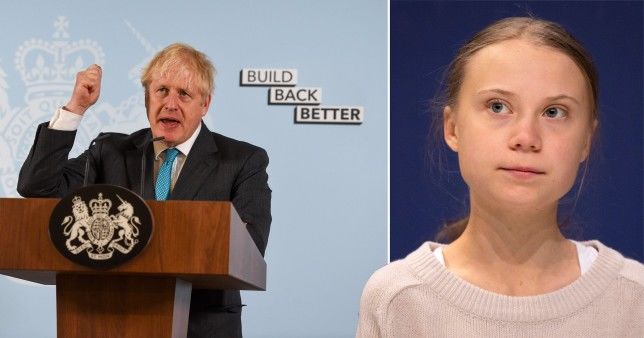 The Swedish activist, 18, took aim at the words of ‘our so-called leaders’ today, saying their remarks have led to ‘no action.’

She didn’t hold back when it came to Mr Johnson in particular during a speech at the Youth4Climate summit in Milan.

The teenager used soundbites from the Tory PM’s speeches – including his ‘build back better’ slogan – before dismissing them as ‘blah, blah, blah’.

Prompting applause from the audience, she said: ‘This is not about some expensive, politically correct, green act of bunny hugging.

‘Climate-neutral, blah blah blah. This is all we hear from our so-called leaders.

‘Words that sound great, but so far have led to no action.’


The speech comes ahead of the Cop26 international climate conference in Glasgow in November which will see world leaders discuss a target of limiting any further temperature increase to 1.5C.

Greta said today: ‘Our hopes and dreams drown in their empty words and promises.

‘Of course, we need constructive dialogue – but they’ve now had 30 years of blah, blah, blah, and where has that led us.

‘All this while the media is reporting what the leaders say they are going to do, instead of what they are actually doing.

‘Don’t get me wrong, we can still do this. Change is not only possible but urgently necessary.’