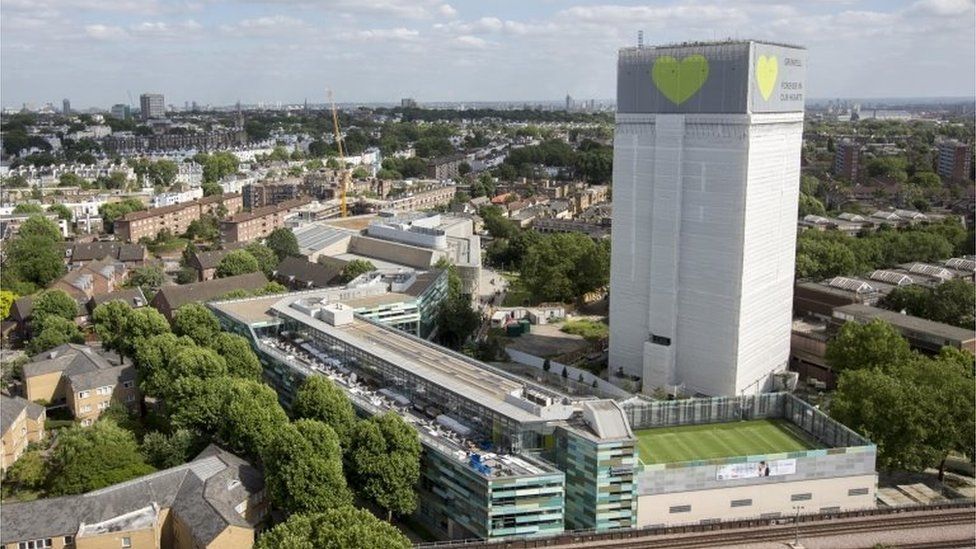 The company that made Grenfell Tower's cladding would "by default" sell flammable materials to construction projects, including high-rise buildings, a sales manager has said.

Deborah French told the public inquiry into the June 2017 west London blaze that Arconic could have sold a fire-retardant product.

But she said it saw the UK market as preferring a slightly cheaper version, albeit with a greater fire risk.

Seventy-two people died in the fire.

The first phase of the Grenfell Inquiry concluded that cladding put on the tower block during refurbishment fuelled the fire.

Statements from a series of Arconic managers shown to the inquiry on Tuesday said the "UK was generally a 'PE market'" - PE referring to polyethylene, which is used as the core material of the panel and is highly flammable.

Combustible cladding is the major cause of the building safety crisis now affecting millions of flat owners.

In June 2014, she sent an email listing large construction projects to which she was hoping to sell cladding sheets.

They include a major development, Pendletons in Salford, Greater Manchester, on which Reynobond PE was used, as well as towers in Swansea and London.

Smaller projects listed by Ms French included Grenfell Tower, which was listed as awaiting an order for cladding, with just the colour to choose.

She told the inquiry "the discussions never came up about requiring anything other than a PE core".

When asked by inquiry lead barrister Richard Millett QC if Arconic would "by default sell them PE", she replied: "That's right, yes."

Ms French said it was "very, very, very rare" for customers to ask about fire safety.

"It was not something that was discussed," she said. "The majority of what I dealt with was colours, availabilities and those types of things."

Sales of Reynobond PE cladding were encouraged by a certificate issued by the independent British Board of Agrement.

It said that the flammable panels "may be regarded" as meeting a British fire performance standard known as Class 0.

However the cladding had not passed the relevant British laboratory test, and had failed several of the European tests on which the certificate was based.

Mr Millett asked Ms French: "If you were selling that product based on claims made about its fire performance [...] do you agree that you would be tending to mislead buyers?"

"Yes, I wouldn't knowingly have done that, but inadvertently I would have been," she said.

Ms French insisted throughout her evidence that she was not a technical expert and passed detailed questions on to a technical manager, Claude Wehrle, based in France.

Mr Wehrle is one of three potential witnesses to the inquiry who have refused to give evidence on legal advice that, if they did so, they could incriminate themselves under a law in France.

All three worked for Arconic. Mr Wehrle and fellow potential witness Gwenaelle Derrendinger live in France, while the third, Peter Froehlich, is based in Germany.

Mr Millett said "the refusal of these witnesses to come and give evidence is unreasonable".

The inquiry was also told that Arconic refused to disclose documents to the inquiry and only did so following a criminal European Investigation Order requested by the Metropolitan Police.

The police force is investigating potential corporate manslaughter, fraud, and breaches of health and safety law.