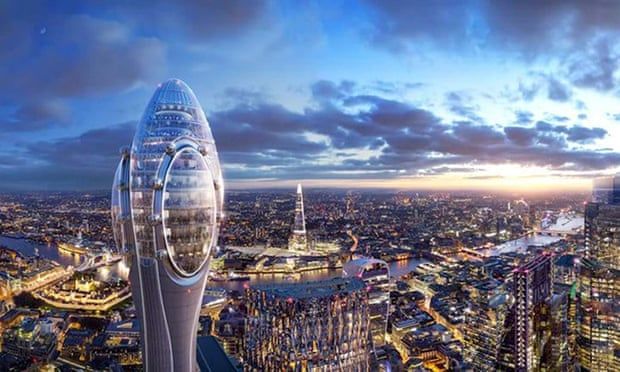 Government throws out plans for 305-metre Tulip tower in London

Decision welcomed by Historic England, which said building would have been ‘visually intrusive’ and ‘highly incongruous’

Controversial plans to build a 305-metre high tower in the City of London have been thrown out by the government.

The surprise decision, announced by the Department for Levelling up, Housing and Communities, ends a long-running saga of contradictory decisions on the fate of the planned tourist attraction – designed by Foster + Partners and called the Tulip – at 20 Bury Street in London’s financial district.

Ministers cited the impact it would have on the Tower of London, and “the highly unsustainable concept of using vast quantities of reinforced concrete for the foundations and lift shaft”, among the reasons for rejecting the scheme and called it “a muddle of architectural ideas”.

If built, it would have become the tallest tower in the City, and the second-tallest in London, just 5 metres smaller than the Shard on the other side of the river. Its striking design included a 12-storey glass dome on top of a concrete pole, with observation decks open to the public, bars and restaurants, as well as glass slides and bridges inside.

The decision was made by the housing minister Christopher Pincher on behalf of the secretary of state, Michael Gove, and followed the recommendation of planning inspector David Nicholson to reject the scheme, following a public inquiry held last November. Gove’s predecessor, Robert Jenrick, was due to make the final decision on the tower in September but was removed from his post.

“The Tulip proposals exude extremes,” Nicholson wrote in his report. “The honed detailing and exquisite presentation are quite exceptional for this stage of any scheme. Conversely, the chosen purpose, form, materials and location have resulted in a design that would cause considerable harm to the significance of the Tower of London, and further harm to other designated heritage assets.

“It would do so for the gains that a new visitor attraction would provide to the economy, tourism and education, which are relatively modest by comparison with the City as a whole and with other nearby provisions.” Turning to sustainability, Nicholson noted that the building would not be carbon neutral.

The news was welcomed by Historic England. Its chief executive, Duncan Wilson, said: “We have long been of the opinion that the ‘Tulip’ would be visually intrusive and highly incongruous from key viewpoints of the Tower, detracting from the experience of visiting the site for millions of tourists and Londoners.” London City airport had also raised concerns about the impact on its radar system.

Plans to build the skyscraper right next to the Gherkin, also designed by Foster + Partners, were submitted in 2018 by the Brazilian banking dynasty Safra Group. Headed by Brazil’s wealthiest man Joseph Safra, the firm had bought the Gherkin site for a reported £726m in 2014.

The tower was initially approved by the City of London Corporation in the spring of 2019, but the London mayor, Sadiq Khan, threw out the plans just months later, saying it would result in “very limited public benefit” and dismissing the design’s “insufficient quality” and resulting “harm to London’s skyline”.

The developer said on Thursday: “We are disappointed by the UK government’s decision to refuse planning permission for the Tulip. In our opinion, this project represented a unique opportunity to reaffirm London’s world-leading reputation in architecture, culture, education, and tourism.”

Lydia O’Hagan, associate at the London law firm Charles Russell Speechlys, said: “Gove’s decision may be a sign of more difficult times to come for tall buildings. Steering tall buildings through the planning system is likely to become increasingly difficult with the recent adoption of the new London Plan and upcoming developer taxes.”
Add Comment