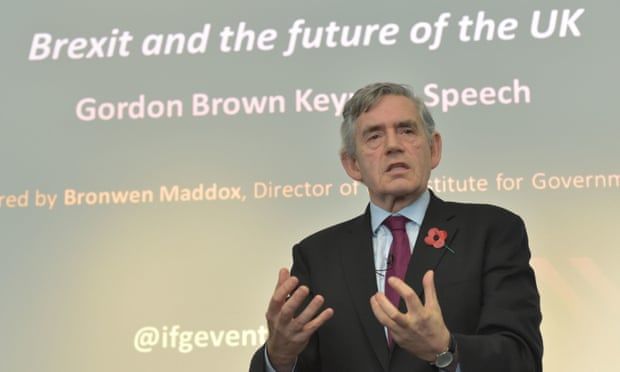 Gordon Brown has said he will not give up pushing for the UK to rejoin the EU, while stressing that this is a personal view and he accepts it is unlikely in the short term.

While the former prime minister was a strong supporter of remain before the 2016 referendum, his comments at a Guardian Live event on Wednesday night are the first time he has explicitly called for the UK to return to the EU.

“I want to rejoin the European Union,” Brown said. “I’ll not give up. I didn’t support joining the euro because I didn’t think it would work for Britain, it wasn’t because I objected to a single currency.

This was, he stressed, not a recommendation for Labour. “I’m only saying it as a personal view. I still regret leaving the European Union, and I still see a long-term future as part of Europe. And that’s all I need to say. That’s my contribution to the debate. I’m not there to decide Labour’s policy at the next election.”

Speaking and answering audience questions at the online event, Brown said he despaired of the negative, fear-based approach of the official remain campaign, saying he even phoned David Cameron to make this point. Brown said he was “just dismissed as being out of touch”.

He said: “My idea for the slogan for the European campaign was ‘leading, not leaving’, because I do think people need to be proud of their country, and being proud of your country by being a leading force in Europe, I think, could have won people’s hearts and minds to staying in the European Union.

“So we’ve got to fashion what a global Britain, in the short term, is going to look like, and I think it is about something we’ve forgotten. Churchill said we had three circles of influence – Europe, America and the Commonwealth – and that was right, of course. But there is a fourth circle, and that’s the international institutions.

“And we should be playing a leading part in the United Nations, in the International Monetary Fund, in the World Bank. We should be shaping the agenda there with other countries. And we just seem to be out of that. And you really can’t talk about global Britain unless we’re part of that.”

After the Brexit referendum, Brown was a regular voice warning that no deal or an overly robust departure would greatly harm the union of the UK.
Add Comment