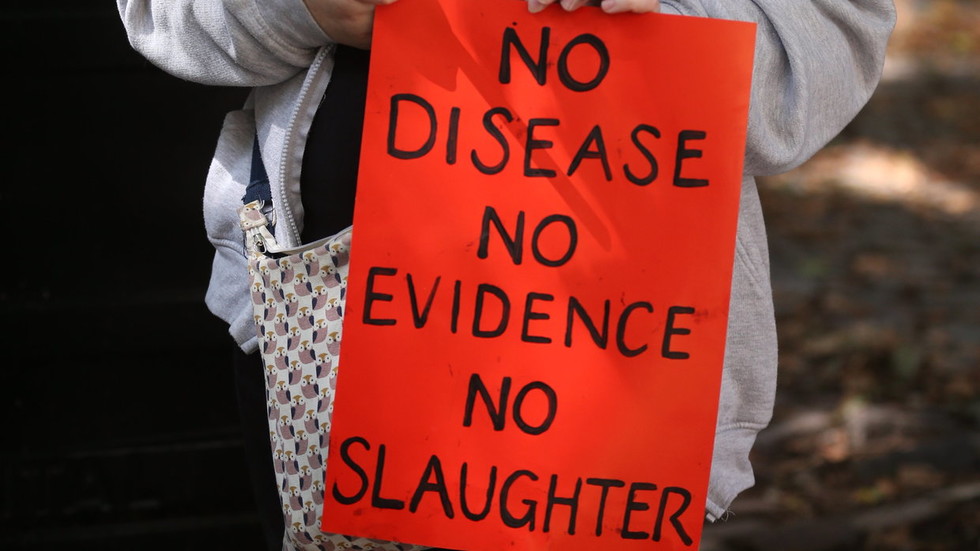 Geronimo the alpaca did NOT have bovine TB, owner claims, as initial post-mortem result proves inconclusive

An alpaca euthanised because it was said to have bovine tuberculosis did not have the disease, its owner claims, citing an autopsy. That conclusion is disputed by officials, who say the post-mortem offers evidence of the disease.

The scandal provoked by the death of the alpaca, named Geronimo, was given a new twist on Wednesday, when the legal team supporting its owner, Helen Macdonald, an alpaca breeder, revealed the preliminary findings of a post-mortem examination.

Geronimo did not have bovine tuberculosis, the lawyers claimed, “the preliminary gross post-mortem findings [being] negative for visible lesions” – a typical marker for the fatal disease, which results in the slaughter of thousands of cattle in the UK every year to prevent its spread.

“For clarity, there are no white or cream caseous, enlarged abscesses typical for bTB in alpacas, whether in the lungs, bronchial, mediastinal or retropharyngeal lymph nodes,” the autopsy report stated. In Macdonald’s view, these findings undermine the conclusions of the Department for Environment, Food and Rural Affairs (DEFRA), and she has called for the immediate resignation of its head, Secretary of State George Eustice. Last month, she staged a protest outside DEFRA’s HQ. She and her fellow demonstrators then marched to 10 Downing Street, demanding accountability from the government.

“There is a long list of people who contributed to the barbaric treatment of Geronimo,” Macdonald told the protesters, adding that she had been punished by officials for daring to “stand up to their dogma”.

"Geronimo was the innocent victim of arrogance, ignorance and greed."

Those same officials are arguing that the post-mortem results were inconclusive, however, and still suggest the animal might have had the disease. The samples collected will undergo further testing, with the results expected to be available before Christmas.

“We have completed the initial post-mortem examination of Geronimo. A number of TB-like lesions were found and, in line with standard practice, these are now undergoing further investigation,” Chief Veterinary Officer Dr Christine Middlemiss said in a statement.

"These tests include the developing of bacteriological cultures from tissue samples, which usually takes several months. We would expect to complete the full post-mortem and culture process by the end of the year."

The Geronimo saga began back in 2017, when Macdonald imported the animal from New Zealand. Down under, the animal had tested negative for bovine TB in multiple skin tests. In the UK, however, its blood tests returned positive results twice, despite it never having shown any visible symptoms of the disease.

Pro-Geronimo experts are of the view that the latter were false positives, as the animal had been ‘primed’ – effectively, micro-vaccinated – against TB, but DEFRA officials maintain the tests provided enough evidence to permit the animal to be put down. Geronimo was ultimately forcibly removed from Macdonald’s farm by DEFRA agents supported by police officers on August 31.