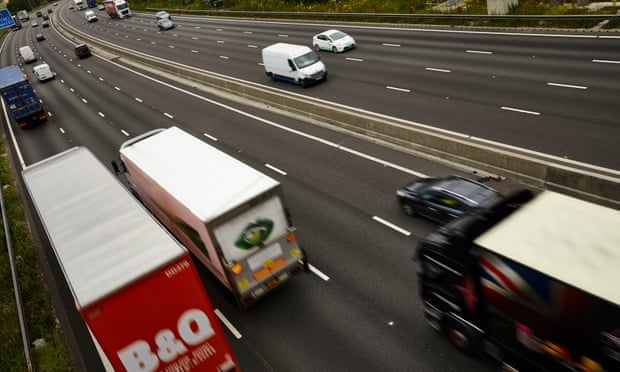 Thousands of Germans who live in the UK have been written to by the government asking them to drive lorries in an attempt to ease the UK fuel crisis, even though the majority have never been at the wheel of an HGV.

They were included in a 1m-letter mass mailing that also tried to recruit ambulance drivers to get behind the wheel of lorries.

The recruitment drive is aimed at easing the UK’s supply chain shortages and a lack of petrol at forecourts.

The news came as a government minister warned that motorists could face another week of queues at the pumps and an industry body said more than a quarter (26%) of independently owned petrol stations in the UK were still dry.

The Germans were automatically included in the mailout because German driving licences issued before 1999 include an entitlement to drive small- to medium-sized trucks of up to 7.5 tonnes.

A Department for Transport (DfT) spokesperson explained that UK residents from Germany who swapped their licence for a British one would have had that element transferred to the Driver and Vehicle Licensing Agency (DVLA) database. This meant they were included in the HGV category, which also covered ambulance drivers, when the DVLA sent out the letter.

The DfT said: “The letter was automatically sent to almost 1 million people with lorry licences - including a limited number of international residents who were automatically eligible. Anyone wishing to drive professionally faces further tests and training.”

A spokesperson said: “We don’t want ambulance drivers to change jobs, or to be diverted from their vital work saving lives … it was impossible to narrow the copy-list by profession due to personal data protection.”

One 41-year-old German man, who, along with his wife, received a copy of the letter at their London home on Friday morning, told the Independent: “We were quite surprised. I’m sure pay and conditions for HGV drivers have improved, but ultimately I have decided to carry on in my role at an investment bank.

“My wife has never driven anything larger than a Volvo, so she is also intending to decline the exciting opportunity.”

The Petrol Retailers Association (PRA) said on Friday that the fuel situation at forecourts was improving, but far too slowly, and that independent petrol retailers were not receiving enough fuel to meet demand, more than a week after the shortages were first reported.

The policing minister, Kit Malthouse, said it could take “a week or so” for things to return to normality.

He told Radio 4’s Today programme: “We are still seeing strong demand in parts of the country around fuel.

“My latest briefing is that the situation is stabilising, that we are seeing more forecourts with a greater supply of fuel and hopefully that, as demand and supply come better into balance over the next few days, week or so, that we will see a return to normality.

“If things started to deteriorate further, obviously the prime minister and the secretary of state for energy [Kwasi Kwarteng], whose responsibility this is, will have to review the situation.”

One option is to deploy the army drivers who are on standby, and have been receiving specialist training in how to drive fuel tankers.

The PRA, which represents two-thirds of the UK’s 8,380 forecourts, said fewer than half of them (47%) had both petrol and diesel in stock on Friday, compared with 52% on Thursday.

Gordon Balmer, the executive director of the PRA, said: “Whilst the situation is similar to recent days, there are signs it is improving – but far too slowly.

“Independents … are not receiving enough deliveries of fuel compared with other sectors such as supermarkets. Until independents start getting frequent supplies, we will continue to see long queues at forecourts.”
Add Comment