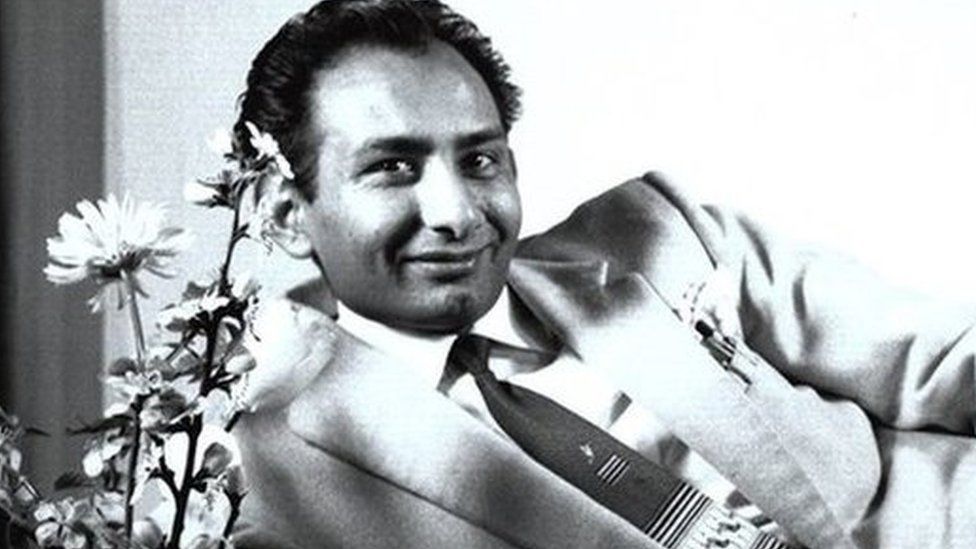 From India to UK: An immigrant's snapshots from 1950s

A new exhibition in the UK explores the lives of South Asian immigrants in 1950s Coventry through the work of India-born photographer "Masterji". 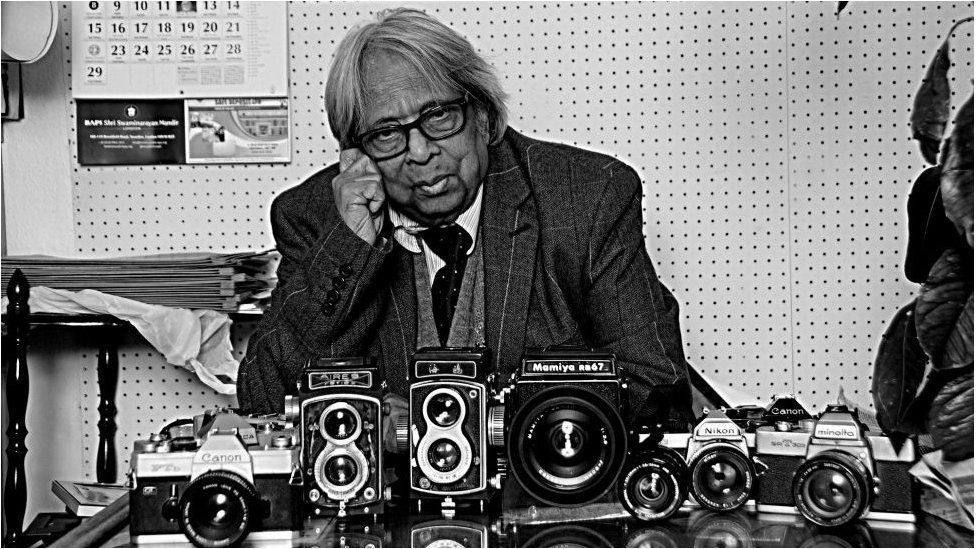 Maganbhai Patel, popularly known as "Masterji", spent years documenting the lives of South Asian immigrants in Coventry in the West Midlands in England.

He was a well-known figure in the community and is considered to be the city's first Indian photographer.

Now an exhibition, titled "Through the Lens of Masterji", at Compton Verney Art Gallery in Warwickshire, is looking back at his life and his work that inspired a generation of Indian immigrants.

"I remember my mother telling me that people actually used to get my dad to go down to the hospitals and have their photographs taken in the hospital with their first-born child," says his daughter Tarla Patel. 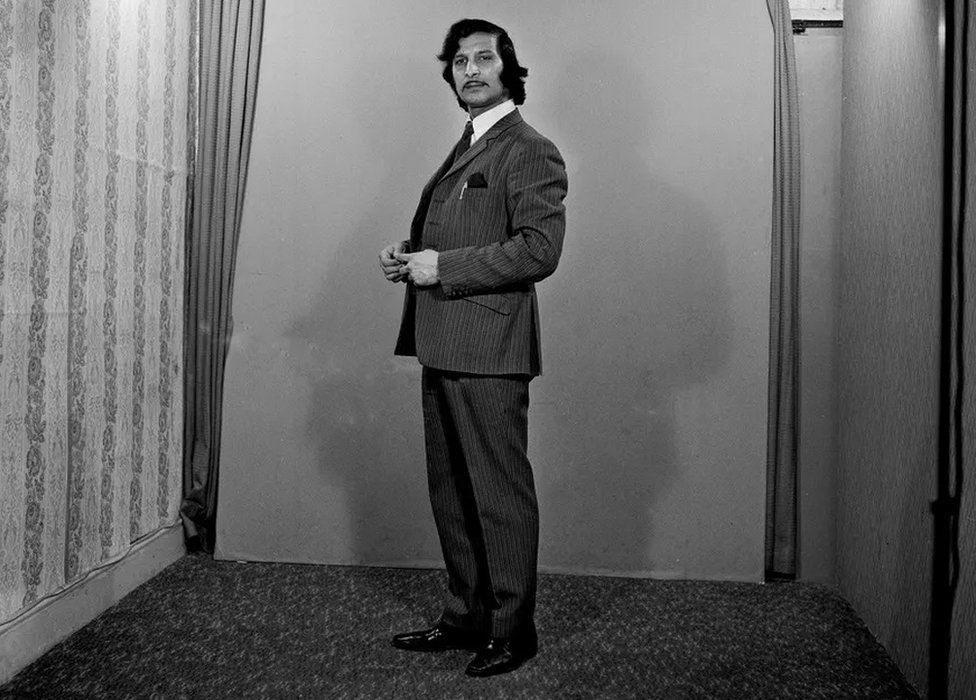 A portrait by Masterji of Kelly, a bus conductor, who went on to buy an off licence shop and move to London

Patel was born on 1 January 1924 in Dedvasan, a small village in Surat in the western state of Gujarat in India.

He studied there and went on to become a headmaster at a local school. But he had bigger dreams and ambitions. When he heard how well his friends who had migrated to England were doing, he decided to follow them and try his luck too. 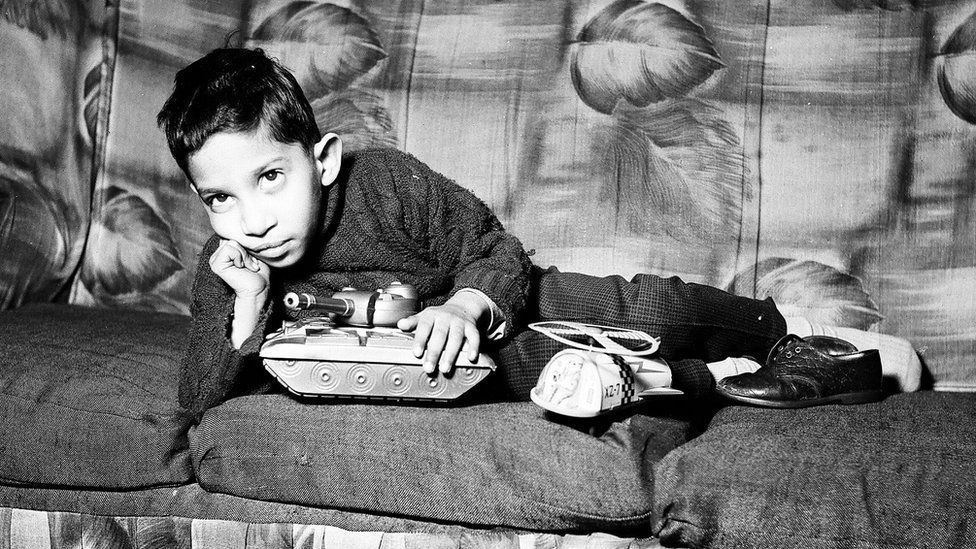 A portrait of Masterji's son Ravindra

His journey to England began from the port of Mumbai where he boarded a steamer cabin ship called the Jaljawahar with his small brown metal case.

Inside this, he carried his prized possession - a black and white photograph of his mother which was tucked away with his other belongings. It took him around 21 days to reach his destination and in January 1951, he finally arrived in England. 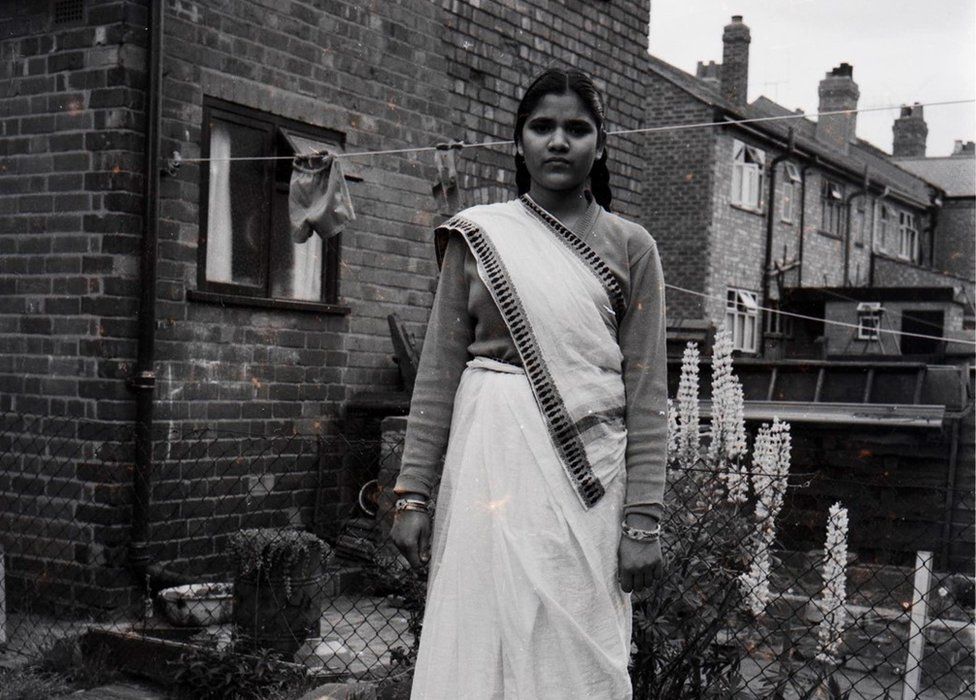 A photo of Masterji's wife when she arrived in Coventry

For a lot of migrants coming into post-war Britain, the jobs available were often manual. Patel managed to get work as a factory worker at the General Electric Company (GEC) in Coventry.

He settled down quickly, made friends with the people around him and soon joined GEC's photographic society.

His love for photography had begun back in India where he would frequently borrow his friend's camera and take photos of his surroundings.

Having regular work at the GEC allowed him to save up and buy a Kodak Box Brownie camera.

It wasn't long before his friends started to approach him for their photos so that they could send them back to their families in India. 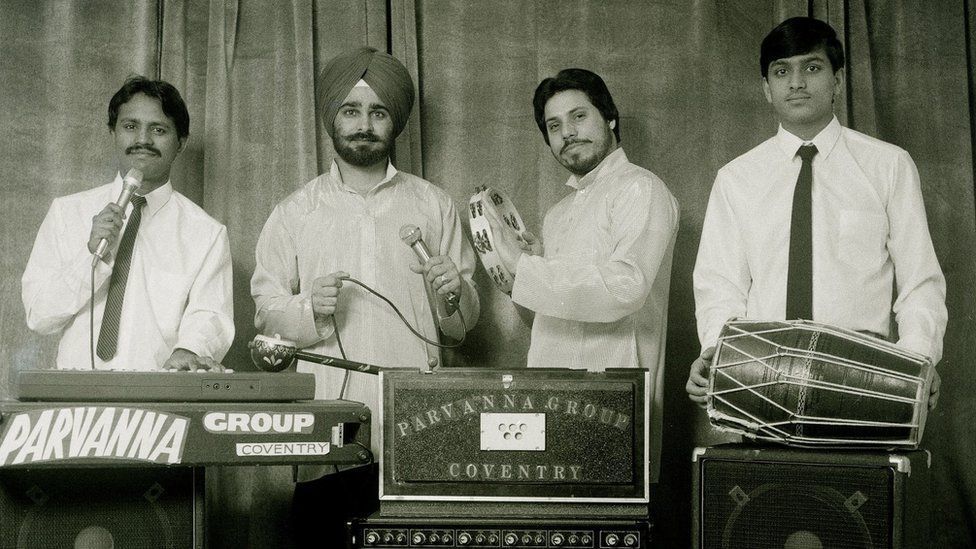 As he became popular, people started hiring Masterji for weddings, birthdays, and other private events

Patel's friends affectionately called him "Master" in reference to his former job in India. As the years went by, this became "Masterji" (ji is often used as suffix after names in India to show respect).

At first, he would take black and white photographs of mostly single men who had come to Coventry to earn a wage and return home.

Slowly these men started settling down in the city and later brought their families or their new bride to England. Masterji found himself taking more and more photos of men with their families.

In the early days, he would take these photos at his home. As he became popular, people started hiring him for weddings, birthdays, and other private events. 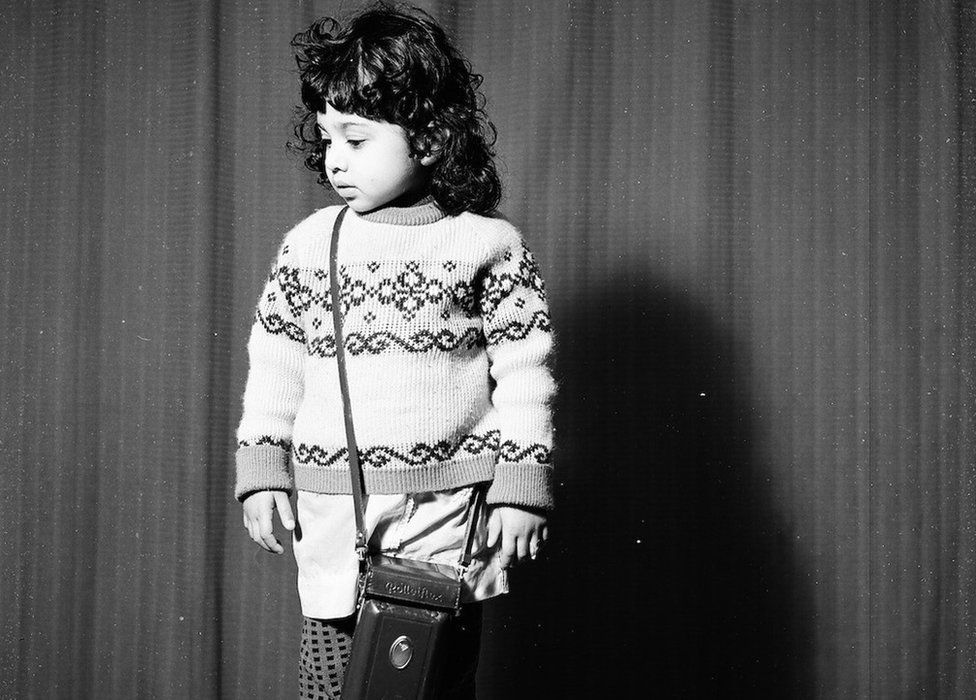 In the early days, Masterji would take photos at his home

Very soon, through word of mouth, the demand for Masterji's services increased and he quit his factory job to focus on photography full time.

In 1969, he opened the Master's Art Studio. He lived with his family above the studio.

During busy periods, his wife and children would drop in to help him. Ms Patel recalls this as a "wonderful" time. She grew up seeing a busy studio with many different people as customers.

"You could hear various accents,"she said. "We used to help with the albums. As I got older, I used to help take photographs in the studio or help out with wedding photographs," she adds.

Masterji's wife Ramaben Patel played an important role in the success of his work and studio. She was instrumental in developing many of the photos and interacting with customers. 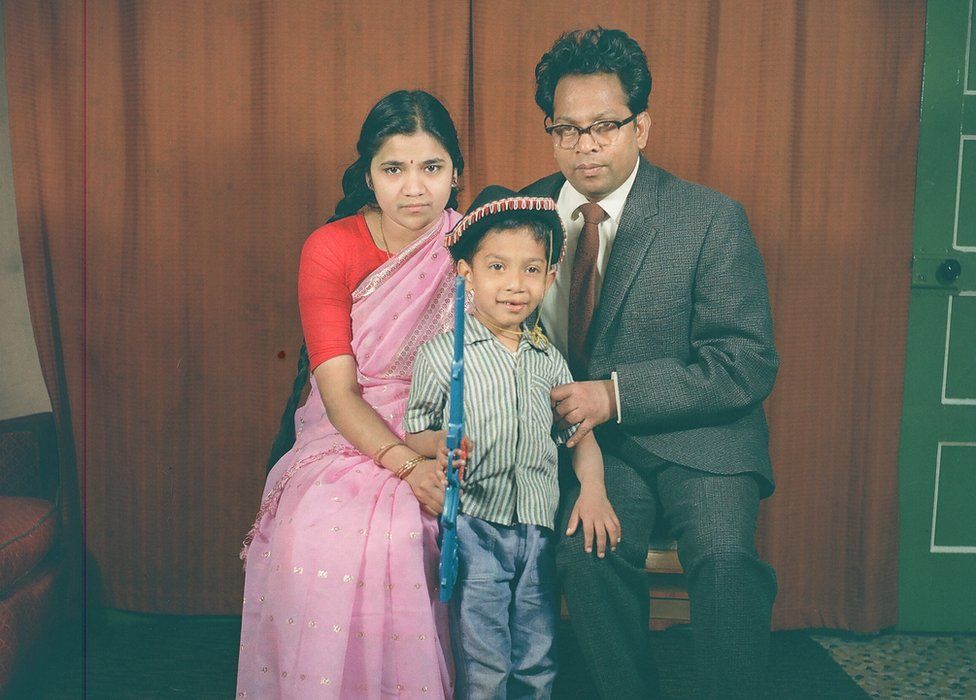 A photographer herself, she took many intimate family photos and also taught her children photography skills.

"Over time, I became experienced in taking photographs and I knew how and where to place the lights. It was easy. Taking photos isn't hard but we need to make sure the photo turns out well." she told the BBC. "I really enjoyed taking people's photographs and I used to feel proud that I was a photographer."

In those days there weren't many female photographers, so customers would initially hesitate to get their photos taken by her. With time, she managed to win their trust.

Some of her photos are also on display at the exhibition. 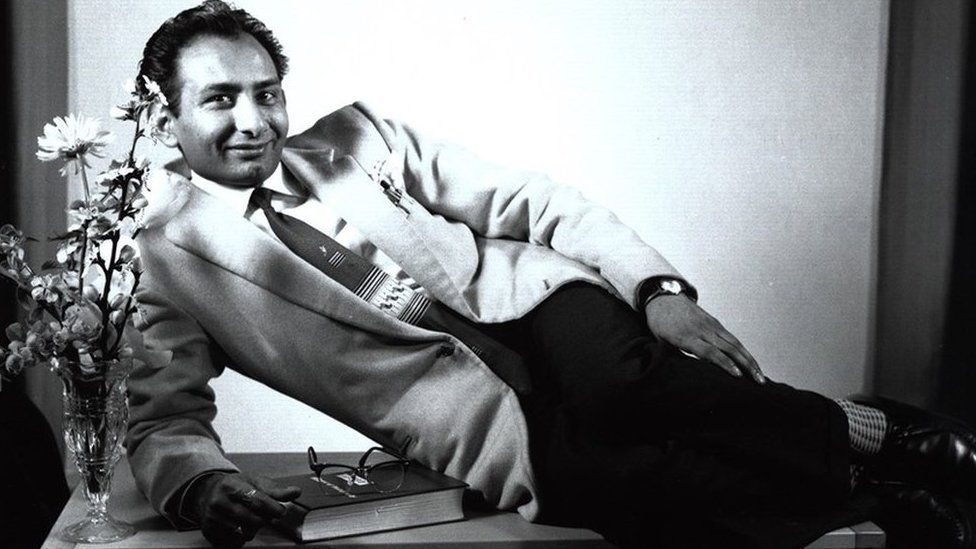 A man poses for a photo by Masterji

"My husband and I worked very hard over the years, and I am happy that people will get to see and enjoy our works," she said.

Tarla Patel is glad that her mother's contributions to her father's success are finally being acknowledged.

"My dad used to train people in Coventry, sometimes he'd double book and be out of the studio, so my mum would take photographs and do a bit of developing. She was never recognised for her role and so it's really lovely to see her name in print," she said. 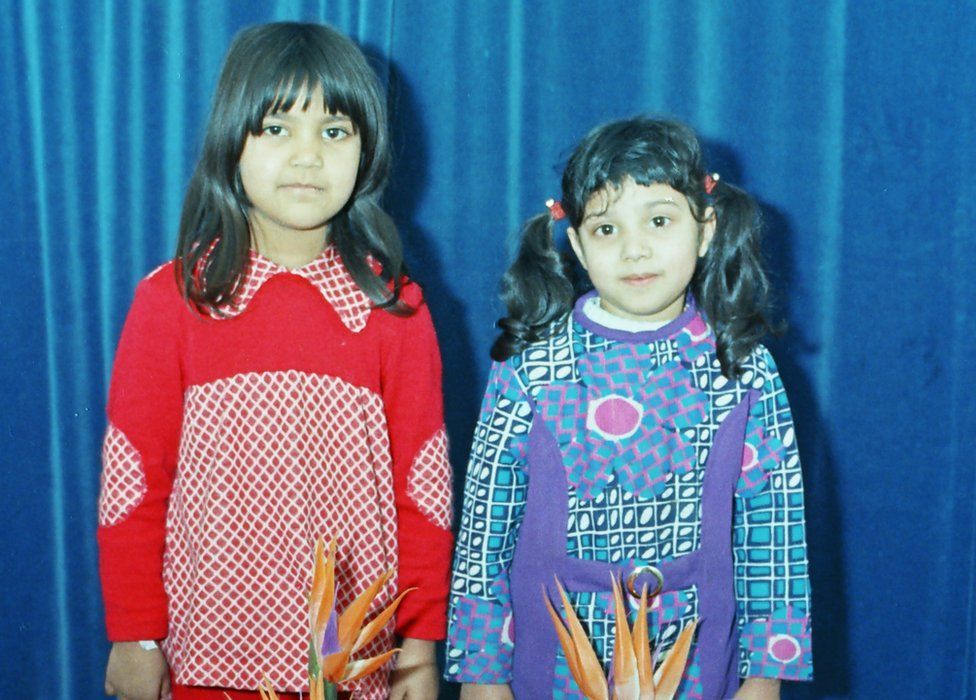 As colour photography came about, his portraits began capturing a new generation of British-born children of Indian parents who had settled in Coventry

Masterji's work acts like a socio-historic record of immigrants who came and settled in the city and helped build it.

His images document not just the changes in the lives of the immigrant community but also in the medium of photography.

As colour photography arrived, his portraits began capturing a new generation of British-born children of Indian parents in the city.

Masterji died in 2018 but Ms Patel and her family hope that the exhibition can help pass on their father's memories and legacy to future generations.